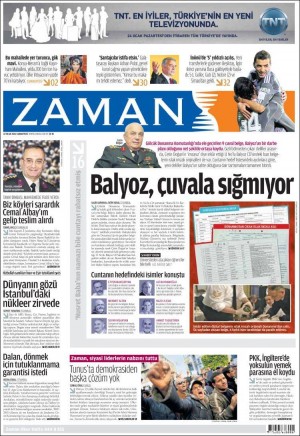 As a rule, almost all the text elements in Zaman newspaper are black. As stated in my previous posts, the headlines never deter from Zaman’s simplistic approach—maybe too simplistic for some readers, but allowing for much creativity in terms of color and font. While the paper seems to ignore the latter, it uses a virtual rainbow of color from its A1 throughout its entire set of inside pages.

The Zaman nameplate uses slightly differing variations of dark blue and dark orange to highlight its reversed-out name and symbol, both meaning “time.” Often, teasers and promos positioned above the nameplate are in a corresponding blue hue, which allows for multiple colored photographs to overlap both the nameplate and the teasers without overwhelming the reader with color above the fold. However, it is the co-relation between the muted tones of the nameplate and the brightness of colors carried throughout Zaman’s design that I do not fully understand. 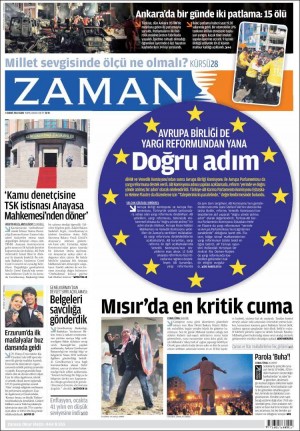 Where the newspaper’s design is predictable in typography and hierarchy, color use on the paper’s A1 changes with chosen layout of the headlining story. While the above A1 shows a range of skills in designing to a grid, the overall colors of the page bother me. It is here that the muted tones of the nameplate contrast too oddly against the brighter colors of the page’s photography, art, and backgrounds, even without including the green and purple shades often used in Zaman’s teasers to corresponding stories to come. In my opinion, the combination of both muted colors and brights makes the bright colors seem unsophisticated, where they do not look so on later pages. The paper’s wide use of color range is nice to see, but can be overkill on the A1. 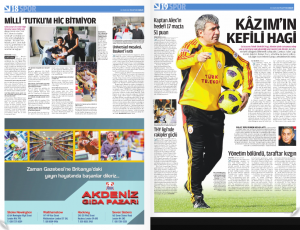 Zaman’s use of color is best exemplified in its section folios. Each of the paper’s sections carries a bright color across the top border of the page, but with only one color, does not overwhelm the colors of the page below. Without the muted tones of the nameplate, the paper’s true colors (yellow, bright purple, bright blue and green) shine through the simple black and white copy and purposeful whitespace in a recognizable pattern. This use of color is employed edition to edition, creating a consistency in theme and making it easy for readers to quickly identify and reach for their favorite section. The paper is also recognizable from a distance due to the overall brightness of the folio, which helps draw color from Zaman’s photography. 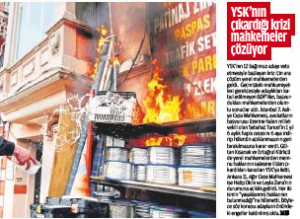 Zaman’s photography often focuses on faces, which carry very little bright color naturally. The overall color of the paper accommodates this potential weakness, often coloring the first sentence of a dek or the background of a hed to draw and emphasize a color or emotion in a photograph (see above, as the red highlights the damage caused by a fire, relaying a sense of urgency). I much prefer the former to the later, as I find the background color on the white type to cheapen the look of the overall page.