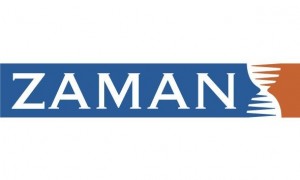 The nameplate of Zaman newspaper employs two elements of graphic design—the purposeful name of the newspaper as its displayed on its A1, in a reverse technique. Zaman’s nameplate uses a yale, almost steel blue and a burnt orange color for background, with the word “Zaman”—a traditionally male, arabic word meaning time, age, and destiny—reversed out in white type. The newspaper’s symbol, the hourglass, is also reversed out, tying in both the meaning of the newspaper’s name. In my opinion, it also emphasizes the strangeness of a newspaper publication beginning with the letter Z, though this may be due to my inability to read the Turkish paper in its true form. 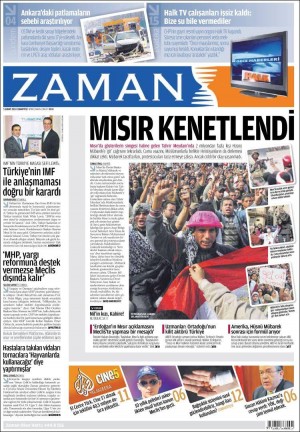 Zaman uses teasers and promos atop their A1 and most section fronts in bright, eye-catching graphics and colors that contrast with the white space of the full pages below and promote items that will follow on later pages. The teasers’ colors match the design elements of the newspaper’s inside page folios, giving Zaman’s section names, the date and page number attention.

Zaman uses a sig— a word or name that’s stylized in a graphic way; used to refer to standing heads in a newspaper, in this case, a downward-right pointing arrow in a color corresponding to the teasers above—to draw color to the beginning of stories and blocks of text. 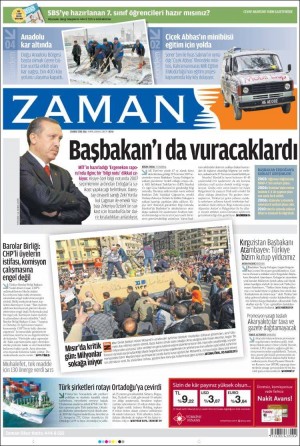 One of the above Zaman covers (the edition with the headline Basbakan’i da vuracaklardi and the horizontal box in the center tipped on a slight left diagonal) shows examples of how the newspaper often uses design elements such as wraps/skews and boxes to add visual interest. The dek of the headlining story’s colors and wrap draw the audience into the main story, while the secondary, related story lies within the rules of the box’s interestingly tipped borders. The main story also includes a sidebar on its right, containing a small, fact-punchy story on the same topic. 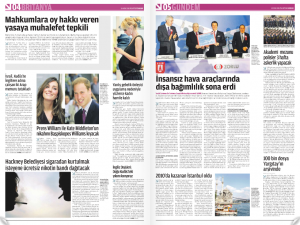 On its inside pages, Zaman shows its true use of grid and white space. The bylines & credit lines including the reporter’s name, usually at the beginning of the story, are at the end, allowing the stories to be introduced by the arrow bug. A distinct lack of pull quotes are used in the design of the open faced pages 04 and 05, emphasizing white space and the photo captions within it.