Mother Jones comes out every two month with three department pieces, excluding the editor’s note, consistently. Those three pieces are called OutFront, Mixed Media, and Econundrums. The length of the OutFront seems too long to be a front of book piece, but it always comes at the front of the magazine. The magazine shows the constant pattern of displaying ads and articles. For example, the OutFont always comes after the sections, editor’s note, and several advertisements.

OutFront, considering political and environmental issues, is the Mother Jones’s first department piece, which consist of several stories. For example, in the magazine’s March issue, it has a total of five different short stores, which are Regan’s tax-cut gru takes on the GOD; tea partiers fear Middle East; Massy Energy punks coal country; climate denialsm meets shareholder activism’ forget your “junk”—the TSA wants to feel up your mind. OutFront is written in a very large size and bold typeface, Cambria, with a mix of color. A cartoon image, which usually looks sarcastic, is also displayed together. It was clearly appealed to me, but in terms of design, I don’t think it looks creative or outstanding. Its overall design looks very ordinary, and the cartoon images are not compelling enough to attract readers. 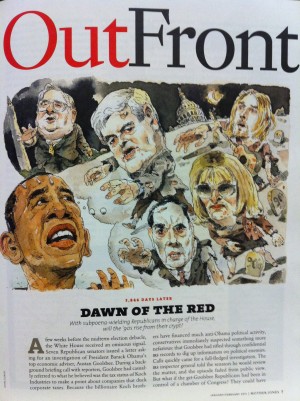 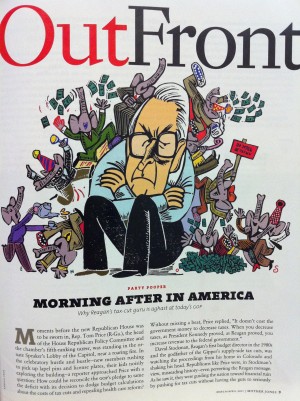 Mixed Media, about 7 to 8 page long, covers the current issues, which are regarded as the most important to know by media. Plus, it also gives the readers entertaining information such as book and movie reviews. For the March issue, Mother Jones covered the following items in its Mixed Media section: Curing the world’s woes with video games; marooned-motorist map; Sarah Vowell’s Hawaii trip; recycling with T.C. Boyle; PJ Harvey mourns her homeland, elements of freestyle; plus book and music reviews. Its page design shows exactly the same pattern with what I found in OutFront page. Since Mixed Media takes more space than OutFront, its fonts size is smaller than one that used for OutFront, but typeface and a mix of color stays the same, which looks very traditional and ordinary too. Another thing I dislike about this section is that about 4 to 5 small advertisements are placed in every two page in this section. Since these advertisements disturbed me, I was lost while reading the stories here. 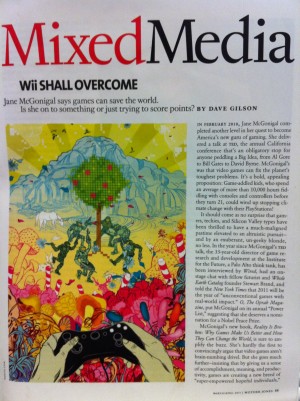 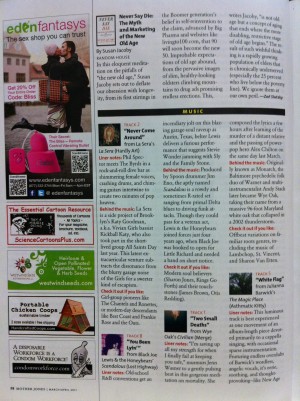 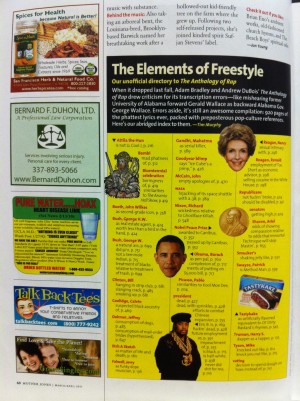 The magazine’s last department section, Econundrums, comes right after Mixed Media, at the very last page of the magazine. Econundrums always takes one or two page of the magazine and its layout seems to be always the same; for example: the magazine always uses a particular picture for this section, and the same color, green (light green), which relates to the section’s theme: environment. However, one thing made me confused was that even though this section is placed at the very last page of magazine, the story has continuation line. That continuation tells me to go back to the front page again to see the rest of the story. So, when I went back to the front page, the story continued right next to another story featured in Mixed Media. 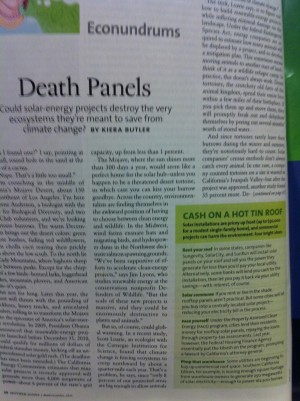 Overall, the magazine seems very crowded as it goes to the end; I felt that I was reading a local magazine, but it has a consistency. This is because Mother Jones tends to place a bunch of ads at the very end. If the magazinespreads those advertisements out in either the front or middle of the book, it would look better.

However, the magazine’s features looks well organized and readable. Honestly, compared to other news magazine such as Time or Newsweek, in terms of design (which might include graphic skills), Mother Jones doesn’t seem to be outstanding and creative. All the feature articles and department pieces are displayed in a very traditional and standard layout style, which is commonly founded in most magazines: body text with several pictures. But, several pieces of infographics displayed in the March issue of Mother Jones seems very clear and informative. One of the feature articles, covering a topic related to economy, features 2 page infographics, which summarize the whole article with visual elements such as diagrams, graphs and so on. Compared to other parts, visual elements prove that Mother Jones definitely puts much effort on the feature section. 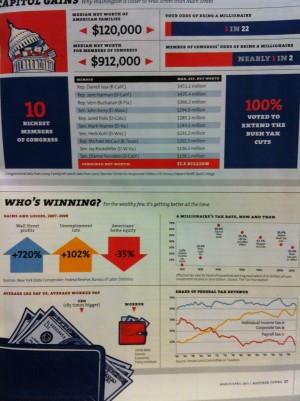 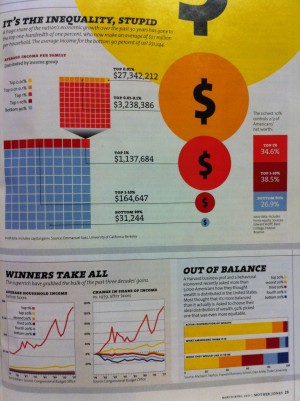