The Guardian’s audience is reflected in it’s content. In a world of tabloid news and entertainment, the Guardian offers dignified and sophisticated English men and women their news.

The headlines used vary from day to day. There is not the daily force feeding of hammer heads in all caps that you would expect from the NY Post or the Sun in London. However, there is the occasional hammer head. The abundant use of color in relation to the content is sometimes very confusing. A headline, about the killings in Libya and Bahrain, reversed in magenta is bizarre and confusing. 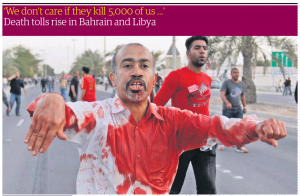 Besides the interesting color treatments, the daily headlines are very straight-forward. The headlines are 5-7 words on average and usually run without a deck head. The main headline usually rins over a four column photo and often uses a colon to establish a point quickly in the beginning of the line.

The tone of voice is not over the top at all. Again, it is a sophisticated publication for sophisticated people. It manages to get to the point of the report with several objective words, crafted into a few phrases. As for pull quotes, they are used within the sections but rarely make it to A1 (which is all I have access to for free). When they are used they are very self explanatory and usually accompany a photo of the speaker.

However, some stories deserve a hammerhead. For the Guardian, it is more like a huge feather head. Like the warm up-lifting name plate, the hammer head for the story on Egyptian revolution focuses on the positive not the violence.

The cutlines/captions are quite brief but usually stand to clarify something about what is depicted the photo. The photo credit is not placed vertically along side of the photo as you will often see, but at the end of the caption, so it reads more smoothly in the paper.

I love the byline treatment that the guardian has chosen. It uses whitespace and shades of the registration to convey the autor’s name and story location. Everyone can tell that a name before the article is going to be the reporter. The result of using whitespace and eliminating the “by” of the byline, is a cleaned up the look—a breath of fresh air—before the article begins.

The weekend promos are HUGE and appear above the nameplate. Cash is king, and I think used on the fron of the daily it would fail at that scale but I think they can get away with it on the weekend edition.

The overall feeling of the paper is airy and uplifting. It is an obvious attempt to make a dated printed medium feel modern, light, colorful, and uplifting.