Upon opening the newspaper the first page (left) is a full page ad. Ads do not start appearing again until maybe 10 pages into the newspaper, and sporadically appears again after 8 or so pages with ads filling 3/4ths of a page, more ads begin to appear with one taking up a full page and with 5-7 different smaller ads filling a full page, it continues to show up in much smaller sizes (like 1/8ths of a page), and the last couple of pages always have a couple of small ads here and there (these usually never take up more than 1/5ths of the a page). With that said, I think advertisements do not take over more than 15% of the whole publication. That said, I think that implies that Kauppalehti is more dependent on circulation profits than ad profits, which means that this publication is in a great financial standing. 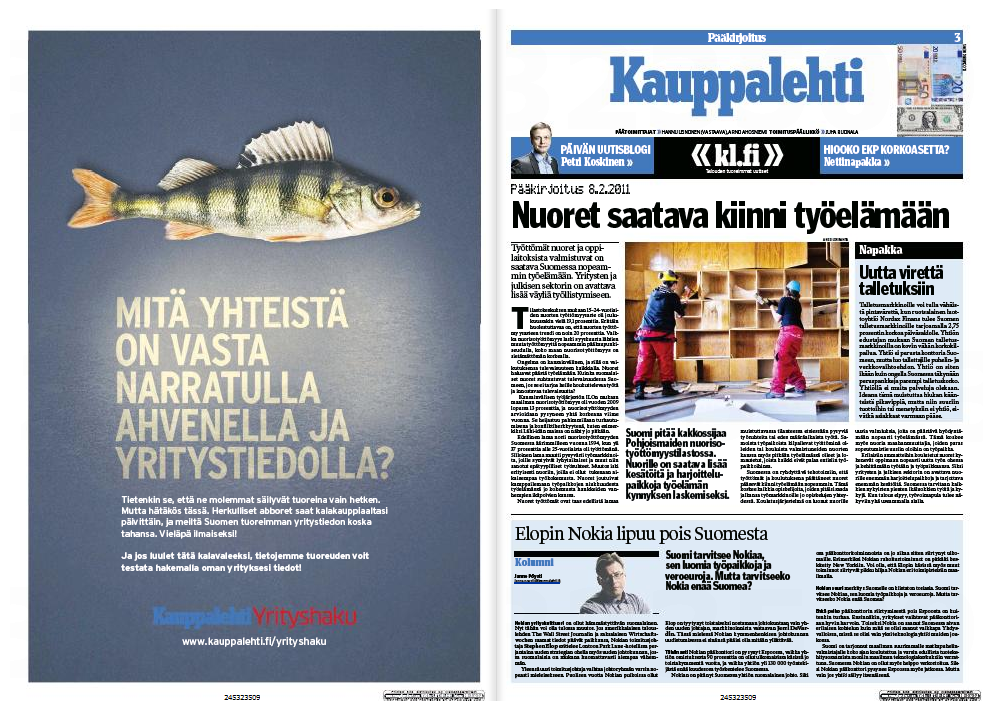 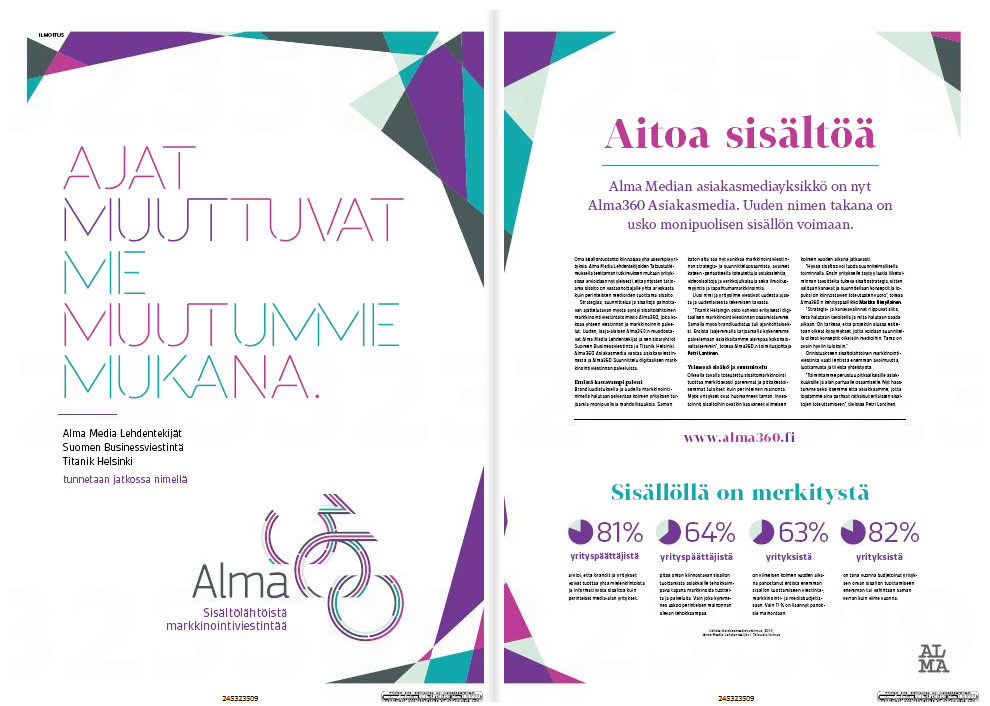 (An ad taking up a full spread is rare for Kauppalehti. This ad appeared in February 23, 2011 issue.) 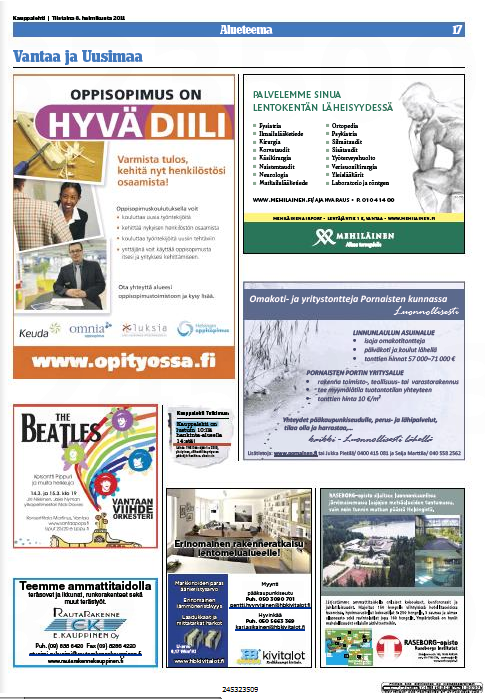 (This is an example of a page full of smaller ads.) 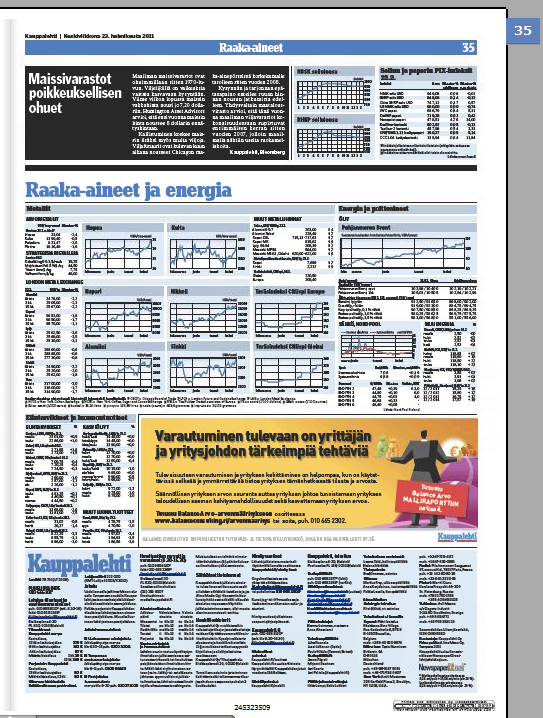 (This is the last department section of the newspaper, always the second to last page. This ad you see above appears in every issue.) 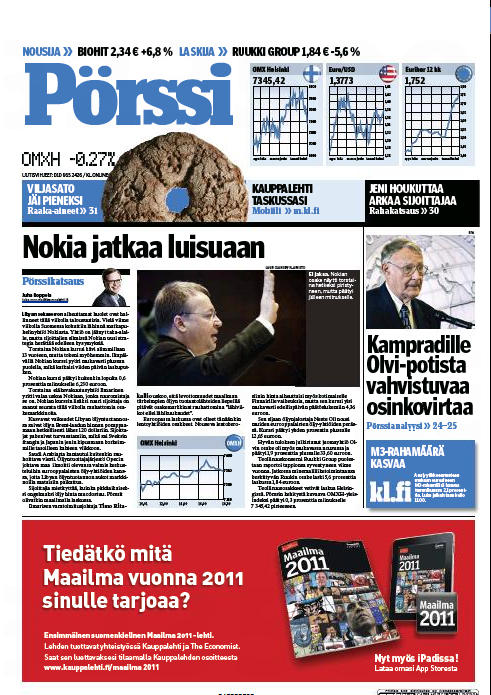 (This is the very last page that appears in Kauppalehti, this section called, “Porssi” also appears inside the issue. There is always an ad taking up 1/4th of the page, located on the bottom of the page.) 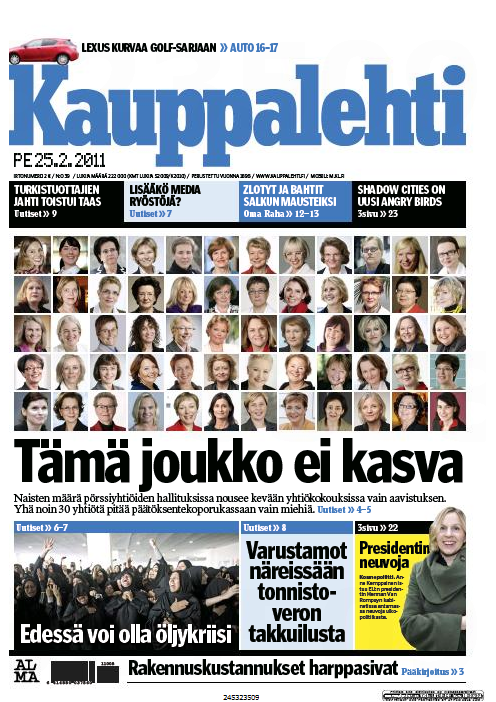 (The front page of the latest issue of Kauppalehti, February 25th, 2011)

I am almost certain that Kaupplehti‘s “local” page is only one page (p. 3) and the section title for that translate to “With Kauppalehti.” (See below.) I’m not sure what purpose this section is fulfilling but it seems like a throwaway page for me. There’s nothing really intriguing about this section in terms of photos and graphic choices. This page seems out of place and odd to me. 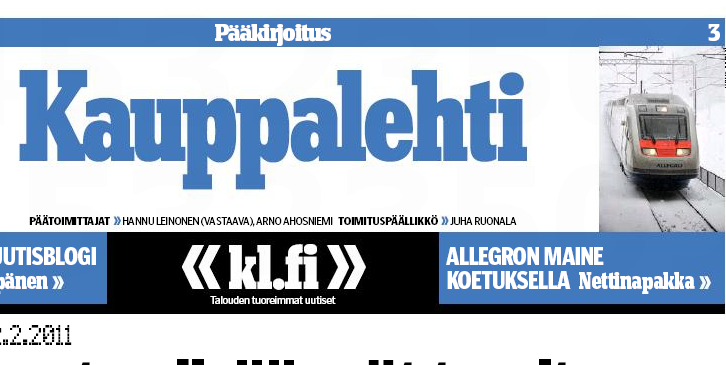 (The section title on page 3.) 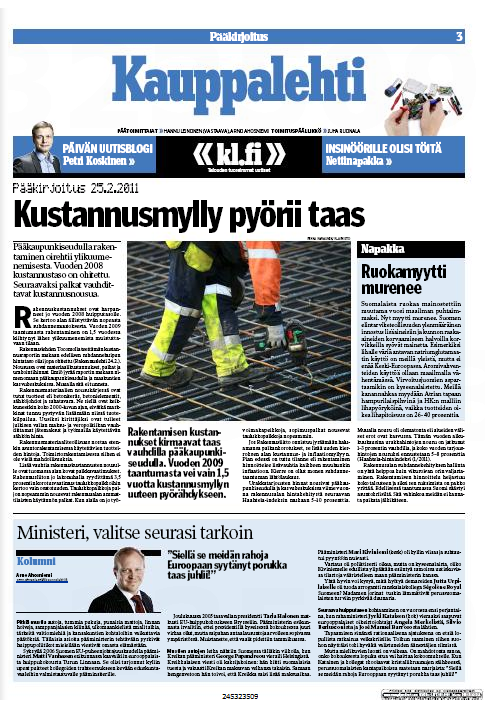 (What I assume is the “Local” page)

The sections that occur permanently in Kauppalehti are:

These are listed in chronological order in which they appear in Kauppalehti. I think it works well in that the “Reports” section is a leeway into the general business world (I guess it’s a greaser to the more specific reports on a company or any specific financial news). Next, they focus on several companies, often profiling companies. Then they get into the boring, detailed things like the stock exchange and banking information (reserves)–these are almost always loaded with numbers rather than the text heavy pages in the beginning to middle of the publication.  If you look at the sections “A Currency and — ” and “Raw Materials” side by side, they visually look similar. All it is really doing is listing numbers and almost 15% or less of the space has text. 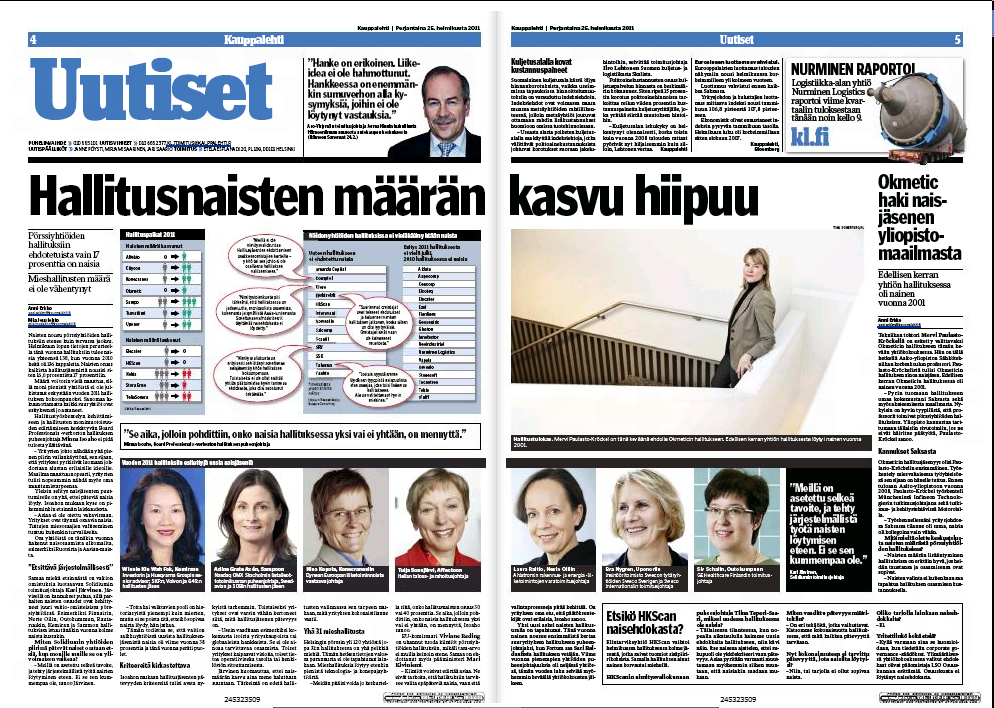 (The “Reports” section usually takes up to 8 pages or more.) 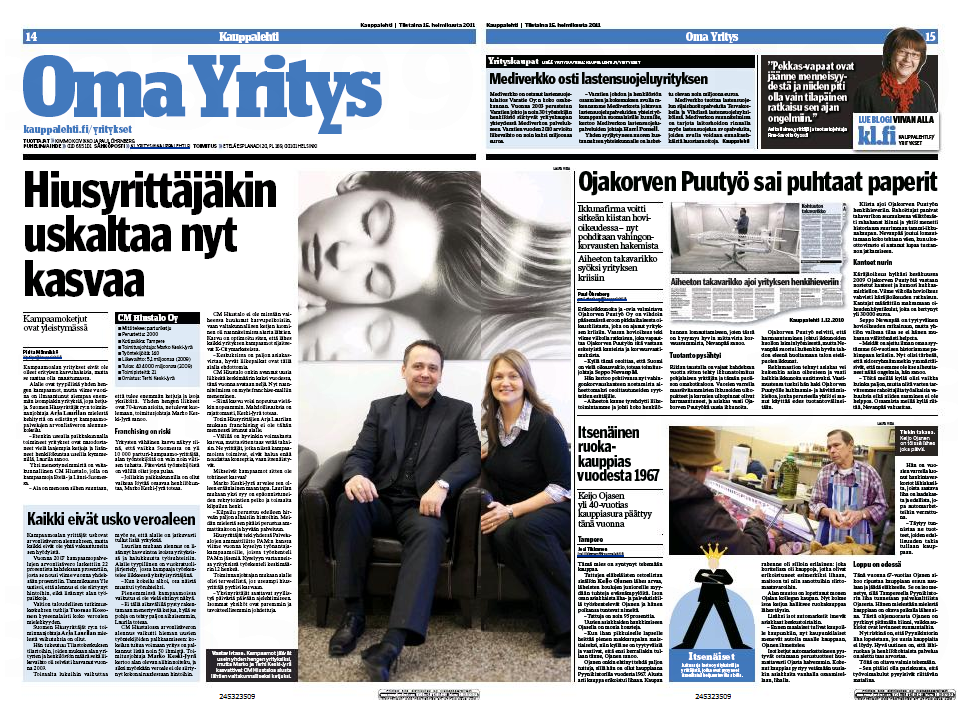 (The “A Company” section always takes up one spread and almost always on pages 14 – 15.) 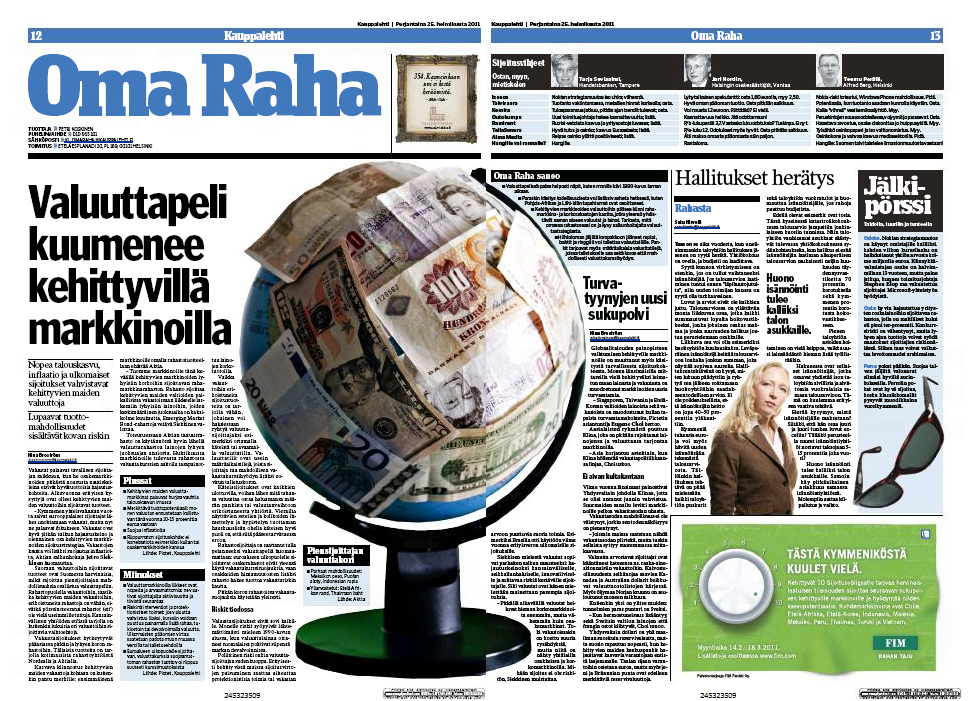 (This is the alternate to “A Company,” titled, “Its Own Currency.” The subject of currency is not a daily topic and currency flucuates only in longer periods of time than 24 hours, so it makes sense that Kauppalehti alternates between profiling companies and talking about currency, because how many companies can one profile every single day, anyway?) 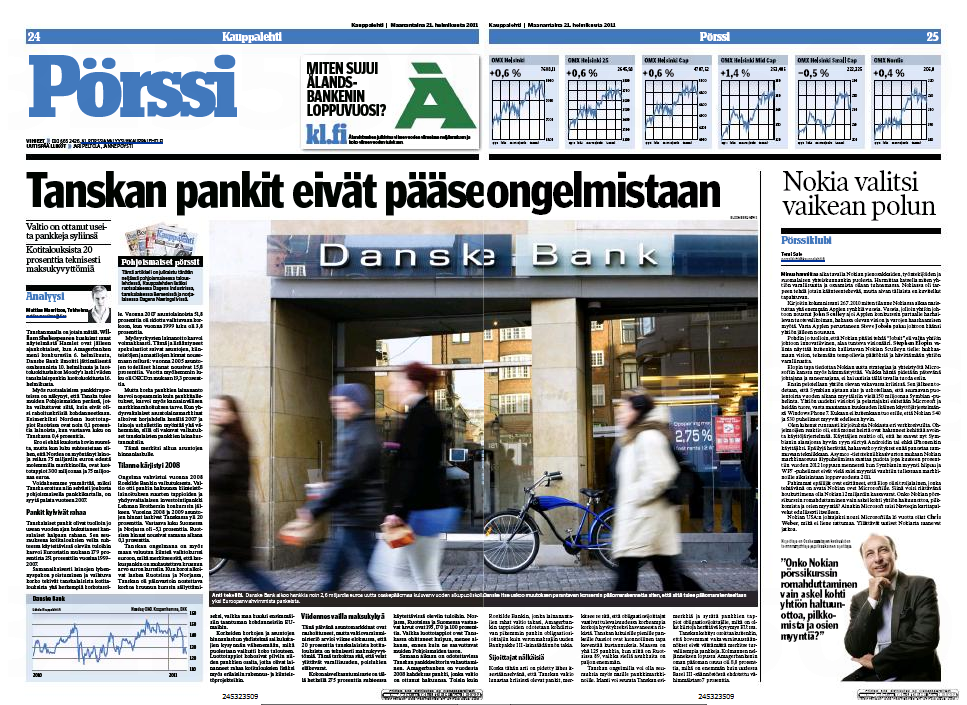 (The “Stock Exchange” section only appears on two spreads — 4 pages) 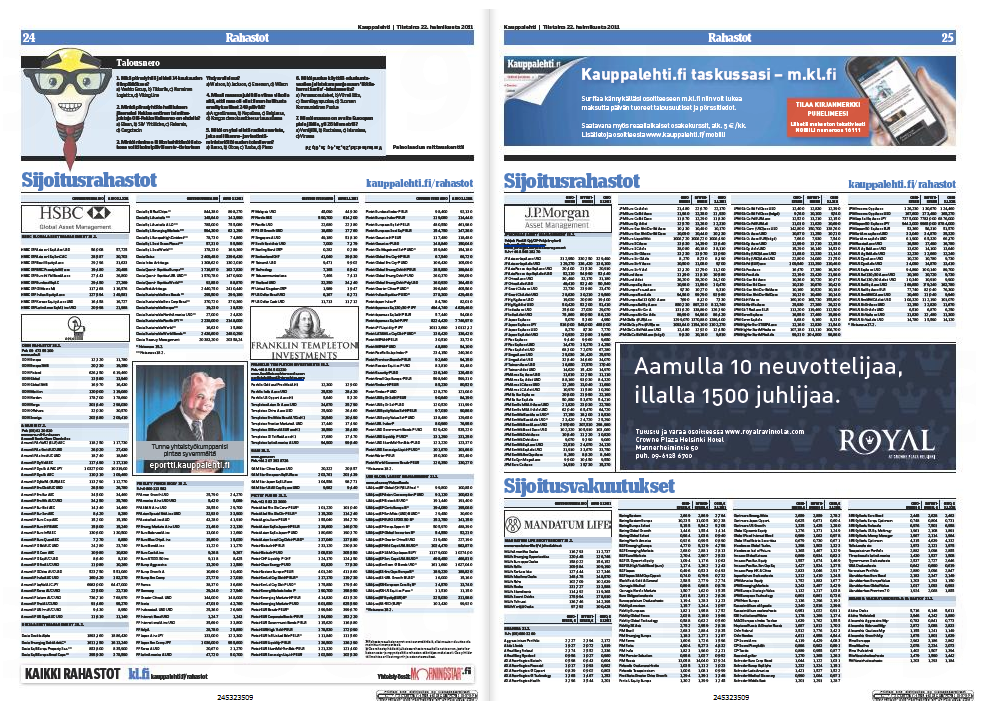 (The “Reserves” section only takes up one spread.) 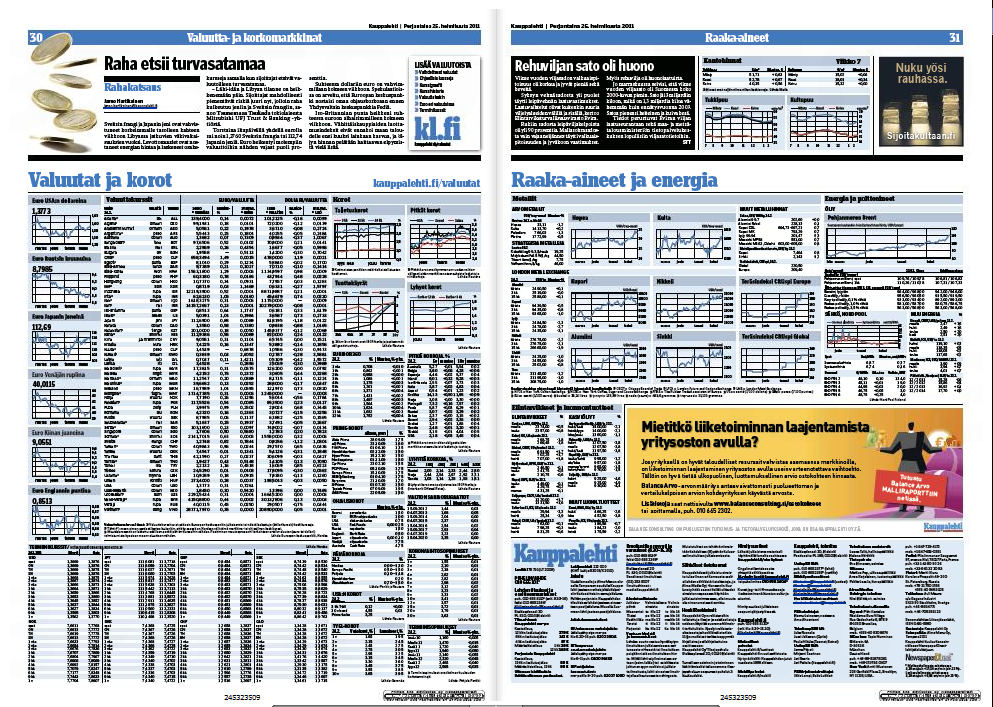 (The “Currency and —” section and the “Raw Materials” section are always put into one spread.  Which again, as you can see, is 90% covered with numbers and graphs of those numbers.)

There are sections that occasionally appear in each issue. These are usually geared toward a topic more specific and only takes up on spread. Although I appreciate this approach to a newspaper, I find it somtimes unorganized. Many people might like these “special pages” and want more of it, but if it only occurs occasionally, it not only disappoints people but makes the publication unorganized and a way to “fill up space” (even if this isn’t so.) I think that if these special pages work well with the general public readers, they should keep these on a daily basis. 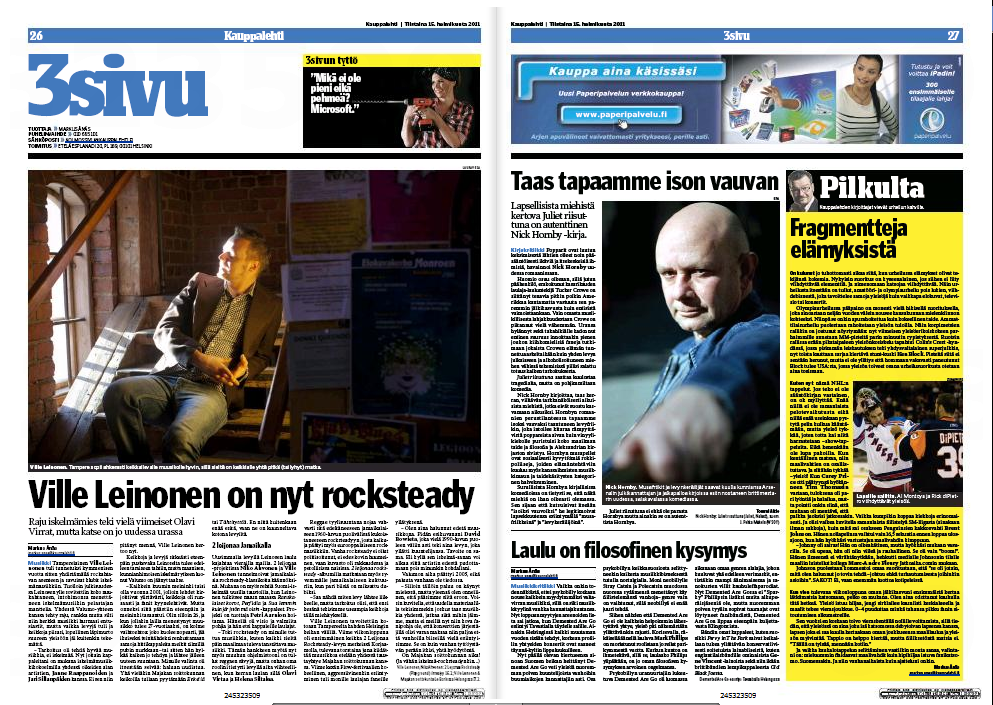 This literally translates to “3 Pages.” The main story says, “Ville Leinonen is now rocksteady.” The man pointing’s story says, “We will meet again a big baby.” The story below it says, “A song philosophical question.” And the hockey story is probably a commentator writing about a hockey game (I couldn’t not translate this.) I have a feeling this special section is similar to New York Times‘ Thursday Styles, in that this is a section devoted to entertain and arts rather than fashion. It’s definitely NOT a business/finance/economy-related section, which is a breath of fresh air for me. 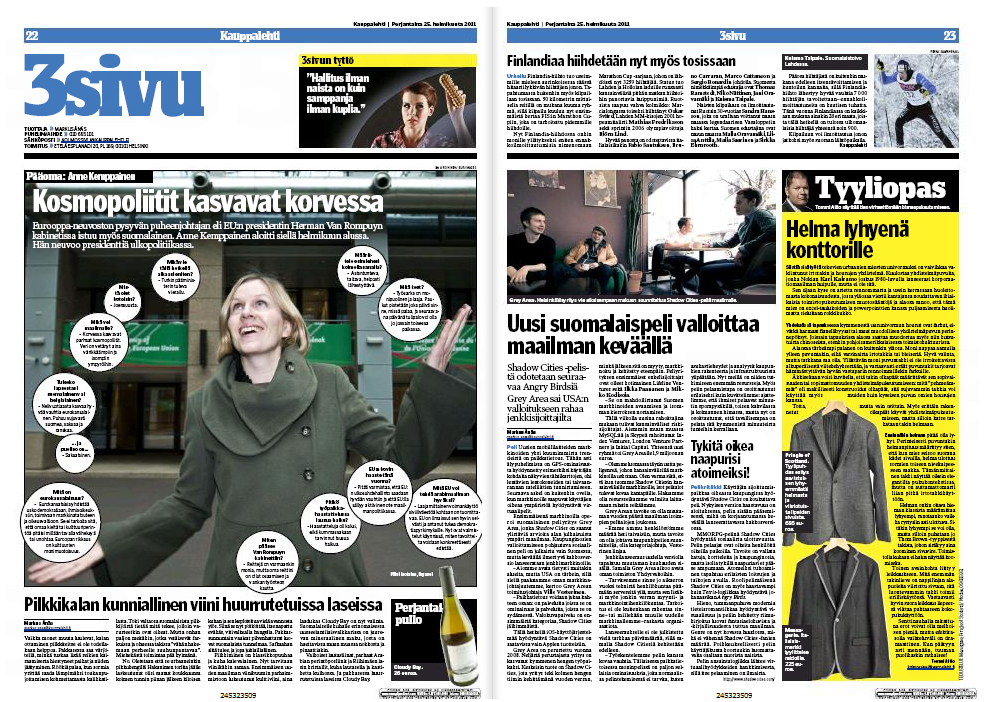 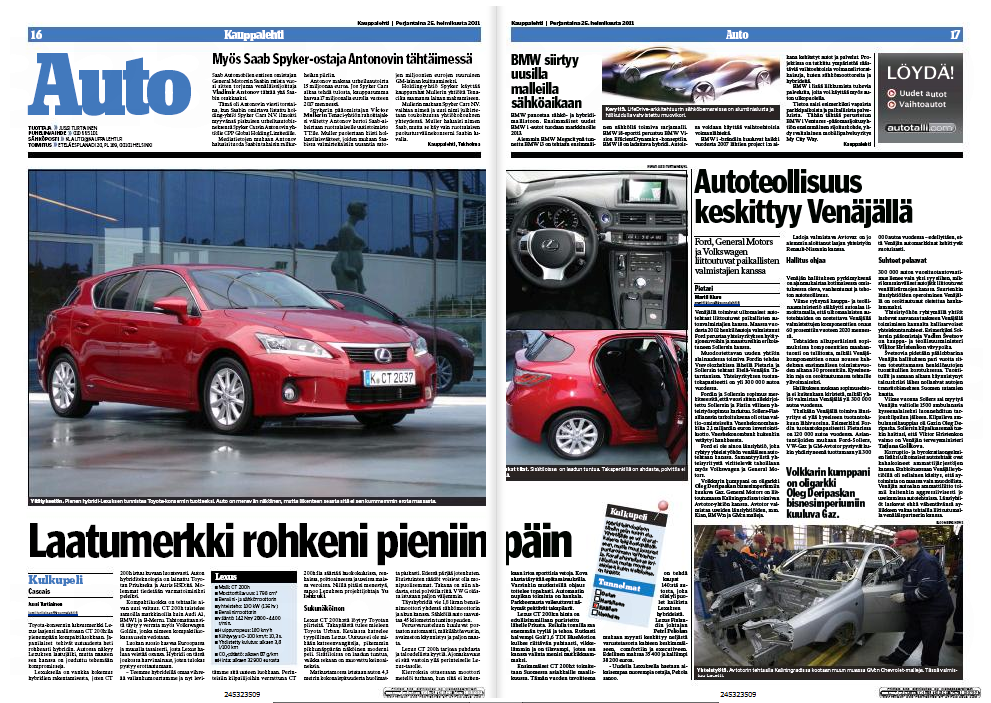 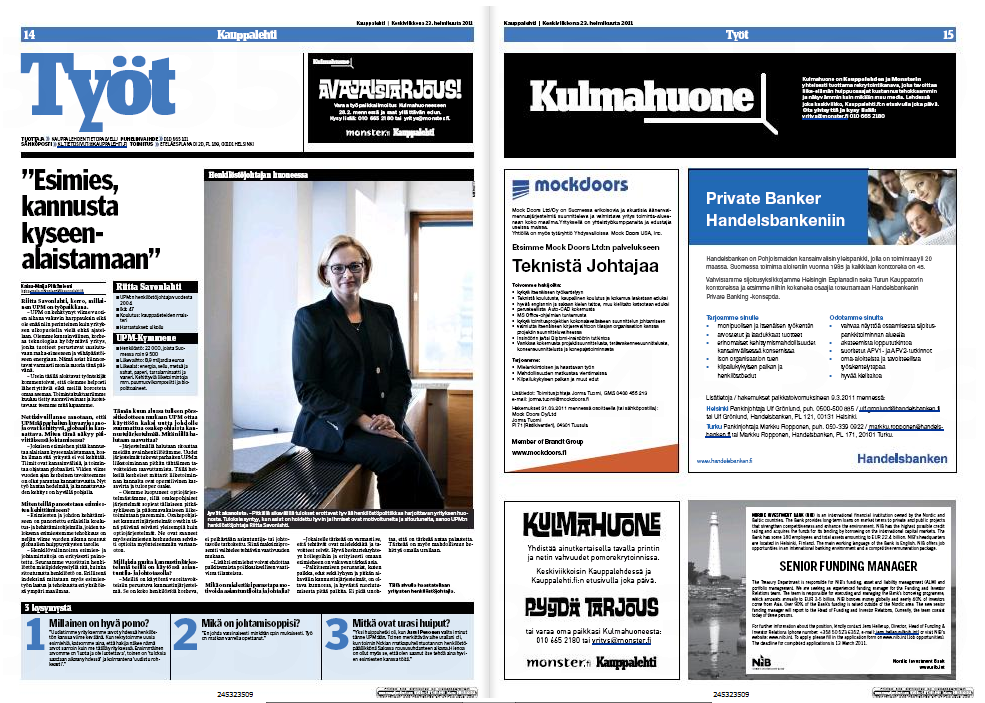 (This section translates to  “Work.”  I think this is a personal profile of someone in a company.) 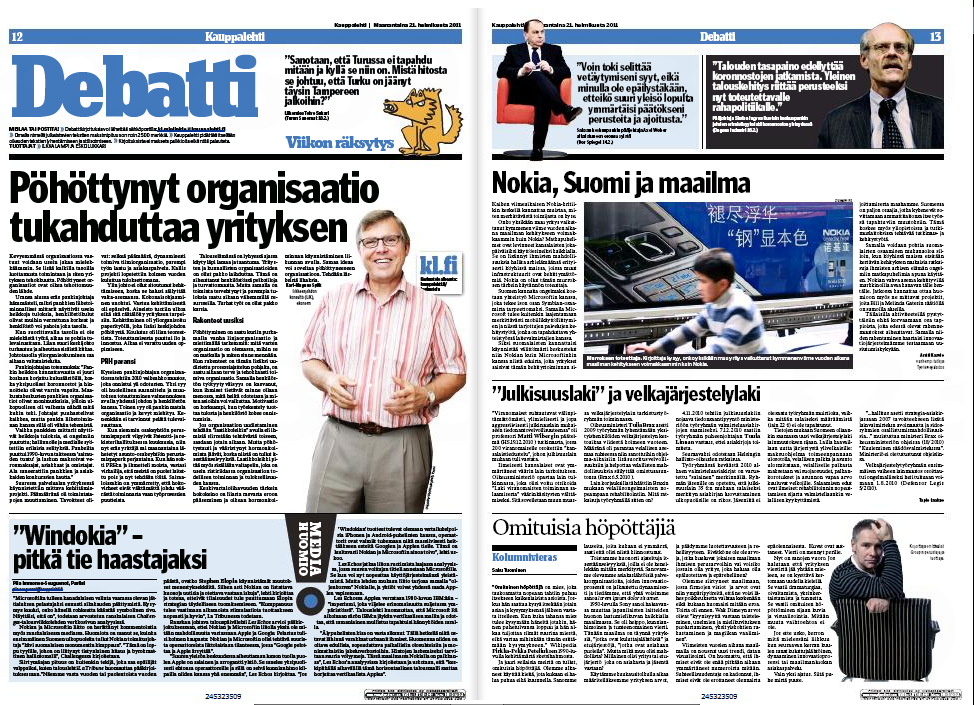 Last Thoughts on Inside

Kauppalehti’s structure and organization is very similar to many American newspapers in that it covers the occasional departments but also provides special sections in certain issues during the week. What’s special about this publication is that it is gear specifically toward the business world and deals with a lot of numbers, something general newspapers don’t do. Yes, NYTimes can have a business section, but Kauppalehti has sections that relate to business and the world of finance within its issue, and I think that’s what I really like about it. It makes sure to cover not only companies but things going on with the stock exchange and any currency changes. The advertisements are scarce and its placements don’t bother me. I think Kauppalehti uses its tabloid space fairly well and keeps me hooked on the articles depending what section they’re in. But I questions some of the choices they make in what information they put in the beginning and middle of the publicatin. FOBs are suppose to be the fun stuff, and I don’t see that in Kauppalehti. The well and BOB of this publication is fine, I think Kauppalehti needs some fine tuning for its FOB pieces, especially choice in photos.