Let’s start this field note with a famous Finnish proverb:

“A man is valued by his work, not his words.”

I’ll let you ponder that throughout my findings.

Overview: Founded in 1897, Kauppalehti is a tabloid-formatted newspaper owned by Alma Media. Its headquarter is located in Helsinki, Finland — the capital and largest city in Finland. According to its media kit, as of 2009, its circulation is at 78,731. Its political standing is “independent right” (thank you Wikipedia). And since I can’t read Finnish (obviously), I went to Kauppalehti’s media kit and chose the “in English” option. Kauppalehti provides latest news in business, topics in various industries and news in the financial world. It claims readers are most likely entrepreneurs, influential professionals, opinion leaders, large purchasing power given their power roles, and private consumers who appreciate high quality and good service. I think it’s important to keep this in mind as I investigate the basics of Kauppalehti. (Side note: this project makes me want to learn Finnish.)

Also called nameplate, “Kauppalehti” is the news publication’s name; often times, it can be seen as its logo or a wordmark. Based on the limited resources online, it seems that Kauppalehti hasn’t changed its flag too much over the years. I’ve found on Google that the Kauppalehti wordmark used to have a red underline; however, I’m not sure if that is just its logo or if it was ever incorporated in the newspaper. It is a bold typeface with serifs in mauve medium blue — very professional and business-oriented characteristics. The color blue is said to be worn to show a position of authority and power (hence, policemen tend to wear blue, professionals wear blue suits more so than black, the Union forces during the American Civil War wore blue). This captures the supposed-businessmen readership fairly well. I posted three flags from the past two weeks to show a signature Kauppalehti style: overlapping an image(s) over the flag. The person or image that overlaps the flag seems to be carefully chosen — the Droid is a technological device that is growing steadily over time since it was first introduced, and the other men are in suits and thereby making them look important, intelligent and professional.

Also known as promos or skyboxes, these are the titles or very brief teasers of the best stories inside the paper. They are the ones with the page indicators, for examples, “8-9,” “22-30,” and “14.” Kauppalehti is very particular in the way they place teasers both above and directly below its flag. This is a great way to grab the readers attention as soon as they look at the paper, but I believe there is a hierarchy in which stories they choose to place above the flag and which ones they choose to place below the flag — the story or stories directly above the flag should be the most important, aside from the front-page story.

Reverse type are white words set against a dark background. Kauppalehti consistently uses reverse type throughout its publication, but only used when it is a standing head. A standing head is a label used for packaging special items (graphics, teasers, briefs, columns, etc.) In this case, reverse type was used for a teaser and a brief on the story.

A headline is the story’s title or summary in large type. This headline is located directly above the text of the story as well as the main photograph. Judging from the past issues, the headline is always black, sans serif, bolded and a different typeface from Kauppalehti‘s flag. Inside the issue, there is a hierarchy of stories, too. I observed other headlines within the same spread to be at least two or three font sizes smaller than the “main” headlined story. 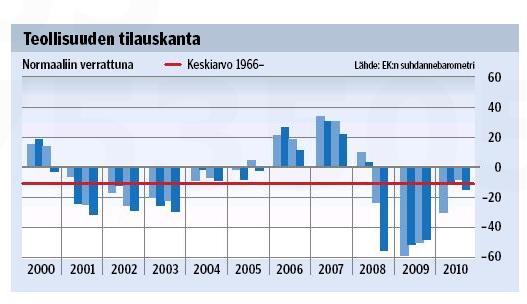 A infographic (lucky for those who were upstairs for these during SND!) is a diagram, chart, map or list that conveys data pictorially. I have no idea what this infographic is depicting, but I assume it has something to do with the average of some kind of business industry since 1966 — “keskiavro” is Finnish for “average” (yes, I Googled that). If you look through all of its infographics in several issues, you’ll see that Kauppalehti always uses it’s trademark mauve blue, deep red, and white in its design. It’s a great way to replicate that Kauppalehti-feeling as you read through the articles inside the publication. 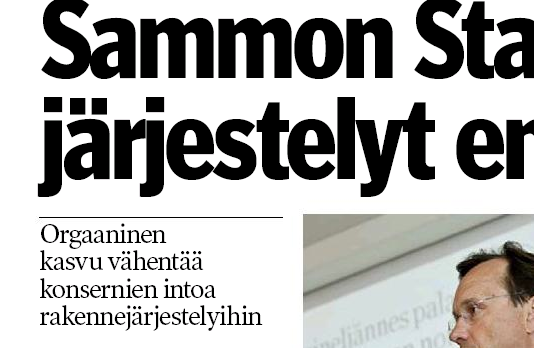 A deck is a small headline, I’d like to call it the sub-head, below the main headline of the story. It may summarize the article, but it should never rehash what was said on the headline. New York Times actually has great examples of decks for all of its articles; it usually says something that is mentioned deeper into the article, but enough to help readers get the gist of why the article is important to read. Again, I wish I was fluent in Finnish. 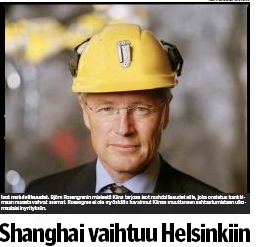 (Hahahaha, how funny looking does this guy look in a yellow hardhat…Anyway…) A mugshot is a small photograph of someone in the story. Hence, mug shot, it is usually just a portrait of the person featured in the article. I’m assuming this story is about business in Shanghai versus Helsinki, Finland.  Kauppalehti posts a lot of mug shots throughout its papers a majority of the time. I would say that most of its articles have more mug shots than it does scenic shots. This makes sense since this publication caters to businessmen/women and authority figures. People who reads this either wants to see his/her own face, or wants to see the faces of his/her competitors. 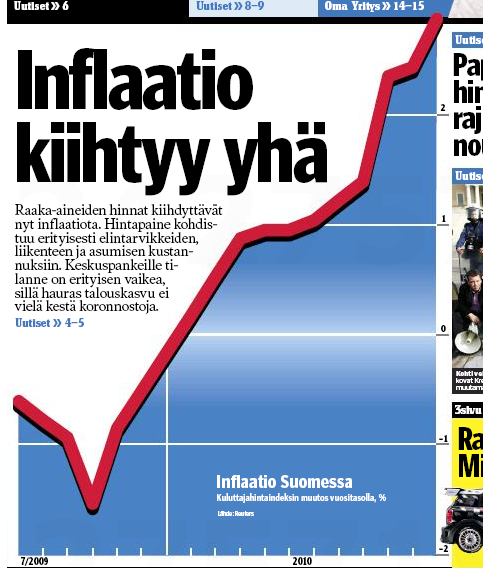 Display heads are fancy headlines that are manipulated to make the stories stand out more. This is probably a bad example of a display head since the actual headline’s typeface hasn’t been manipulated…but the graphic featured next to the headline adds that flair to the story that will attract a reader. And since I couldn’t find a term to define this type of relationship, I chose to call it the display head. Please correct me if I am wrong Professor Strong! 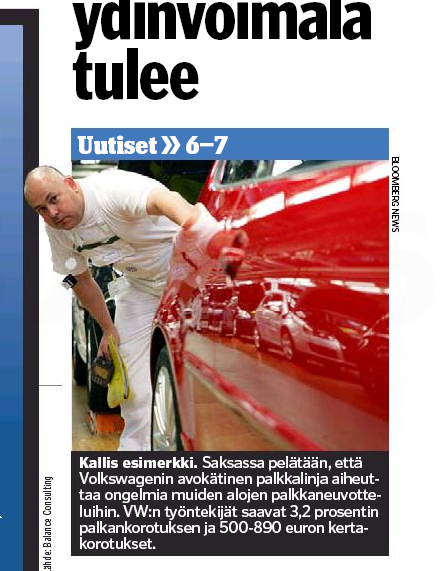 A cutout is also referred to as a silhouette, it is a photo in which the background has been cut away. Kauppalehti uses this a lot throughout its paper, especially to place atop the flag or when featuring a main story inside the issue, or when it is a teaser for other stories inside the paper. It’s a great aesthetic approach to making its paper stand out from the rest. Kauppalehti has so far used a lot of signature stylistic approaches that breaks away from the way classic and traditional newspapers use photos and images. (Sidenote: Is anybody as curious/bothered as I am that a Finnish paper uses Bloomberg News? Does Bloomberg know about this!? — look to the right of the image.) 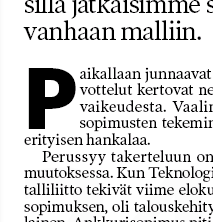 Initial Cap, also called drop cap, is a large capitalized letter set at the first sentence of a special feature story. It is important to note that it is only used for a special feature story, because this holds true throughout an issue. Kauppalehti will not have drop caps for any other stories in the paper unless, I assume, it is considered a special inside story they are covering. The drop cap is usually bolded and four sentences longer than the rest of the text of the story, as shown in this example.

A cutline, popularly known as caption, is information about a photo or illustration that is a part of the story. In this reverse type, Kauppalehti sets a caption for some kind of alcoholic beverage. In fact, all of Kauppalehti‘s captions for its photos and illustrations are presented in reverse type. Again, another differentiator in the paper’s signature style approaches. 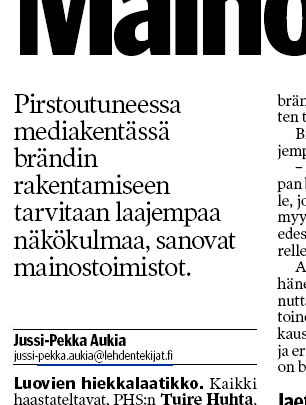 The byline is the conveniently named term for a writer’s name of that article. Our text book states that it is often followed by key credentials. In Kauppalehti‘s case, it is followed by the journalist’s contact information, Jussi-Pekka Aukia’s e-mail. Unlike other publications, Kauppalehti does not state “By [name].” The Daily Orange has great bylines with the writer’s quote directly below his/her name. But, I guess e-mails work well, too. 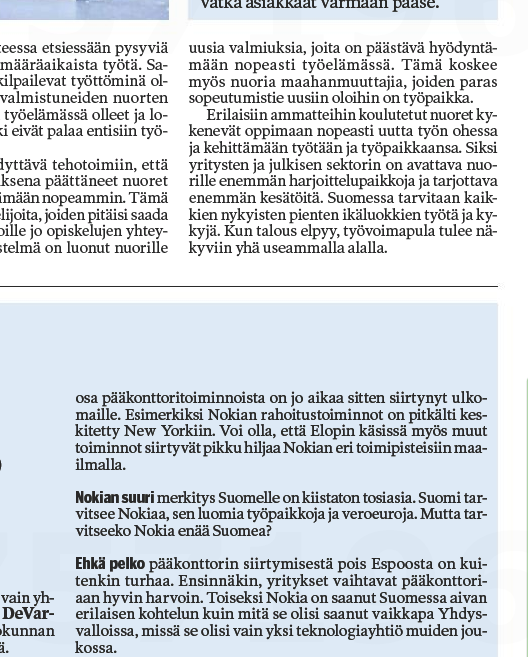 Bastard measure is the inappropriately named term that needs to be changed so that future news designers do not become vulgar individuals who freely use profanity. Just kidding. It is a type set that is a different width than the standard column measure. If you look at the column below the two columns above, you’ll observe that this paragraph is significantly wider. This is perhaps a way to separate two distinct stories within the same spread. You’ll also see that another way to separate stories is using a rule, a straight line used to either create boxes or separate stories. 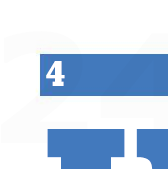 Folios are the page markers of a publication. It usually, but not always, shows the date, paper’s name, etc. In Kauppalehti, folios only show the page number and is in reverse type, located on the upper corners of each page. Nothing special or superfluous — the perfect style for a business/financial world-oriented paper. 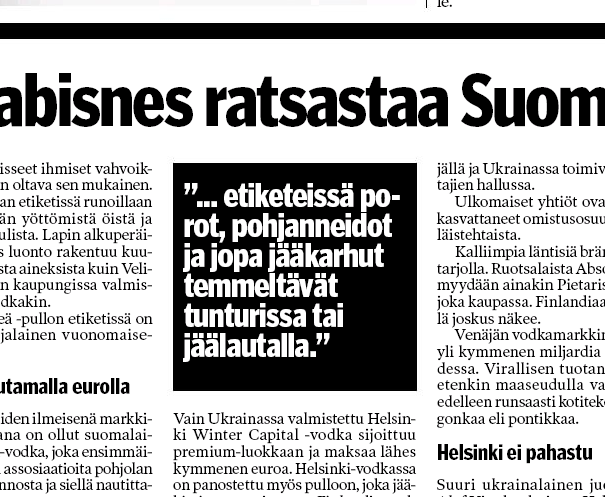 Also known as pull quotes or breakouts, are quotations from the story that break out from the story text. It is often times used to add graphic emphasis and freshen the eyes from reading heavy text. Kauppalehti hardly uses pullquotes, and when it does it’s either in reverse type (they like using this a lot) or a part of its deck. 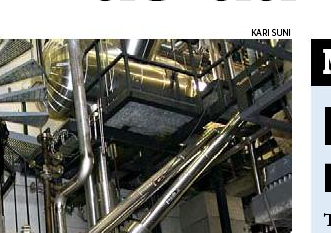 A photo credit is a line showing the photographer’s name of the photo featured on the spread. Here, this photographer is Kari Suni. Kauppalehti always puts its photo credit on the top right corner of every photo in very small font size, capitalized and very light type weight. 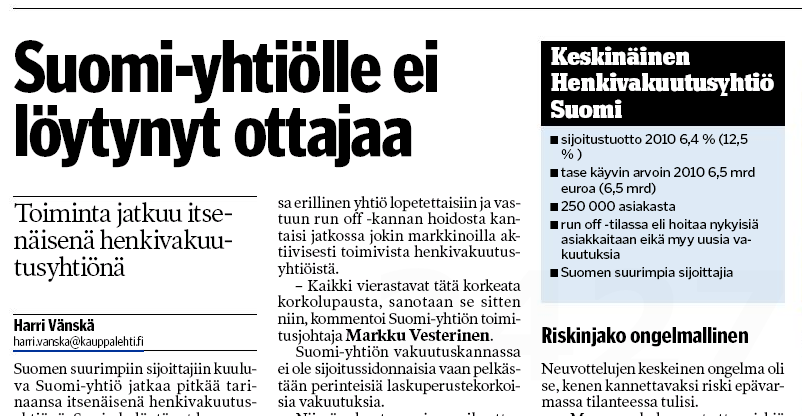 A sidebar is a side story, often boxed, that accompanies the story. It usually offers information related to the main story and can be represented as an infographic, statistics (as this example shows,) or just paragraphs of other related information. In this example, the sidebar is also incorporating a screen. Screens are colored boxes, generally water-downed colors (this light blue) that have a graphic separation element. Kauppalehti uses this a lot throughout its spreads and different issues, all the time. 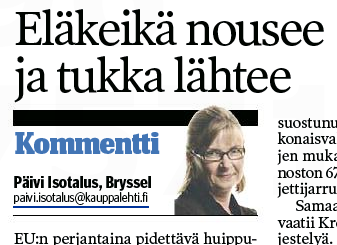 A sig is a special label set into stories giving typographic emphasis to the topic, title, writer’s name, etc. In this case, this sig gives emphasis to Paivi Isotalus, the writer’s, name. It is always in its own graphic box with a heavy rule, cutout of the writer’s portrait, and sig in its signature mauve blue.  It is also called the bug or logo.

There are many more examples of Kauppalehti that I can post here, but things like text wraps or gutters are obvious. There’s so much we can learn from these simple things…we have to really keep in mind how we treat the smallest things in our designs. 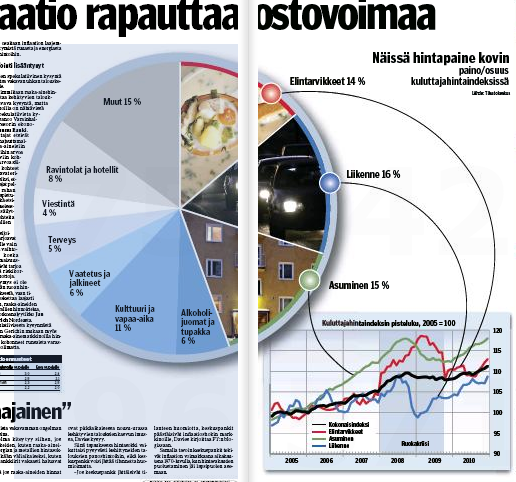