Generally, any publication will have a hierarchy-system in which certain articles (if more than one on a page or on a spread) are more important to read than others, as well as, text within one article. For example, creating pull-quotes in an article is a way to extract a piece of the body copy and make it more more noticeable than the rest; since pull-quotes are usually visually “removed” from the body copy (hanging on white space, lying in the between two columns of text) and almost always in a larger font size than the rest of the body copy, it immediately attracts the eyes. Another example would be having different font treatments and typefaces as visual cues in which story is most important on a spread, and that is what Kauppalehti does. 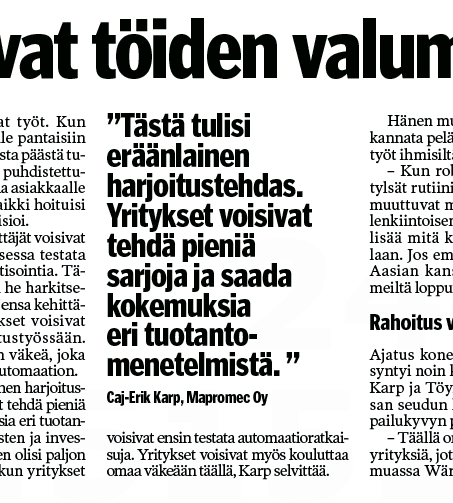 The body copy of all the stories featured on the front page, as well as, the spreads inside, uses serif type. I can’t tell what the typeface is specifically, but it looks like a more circular version of Times New Roman. The only reason I know it’s not Times New Roman is because the counters in Times New Roman “o” is much larger in space than Kauppalehti’s. 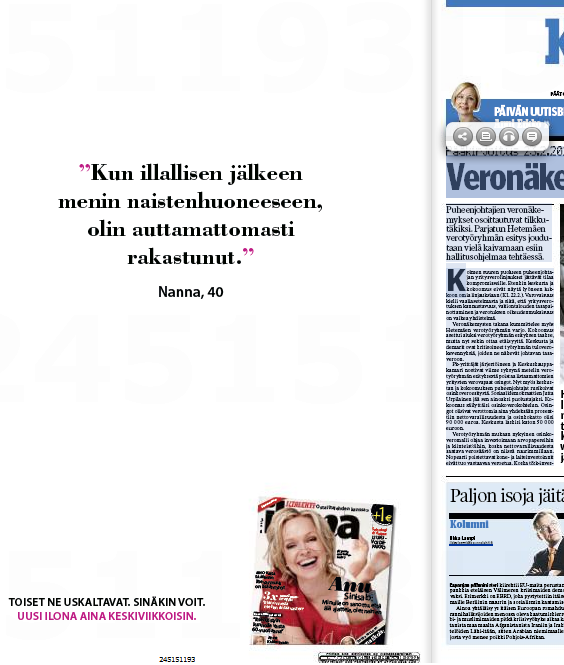 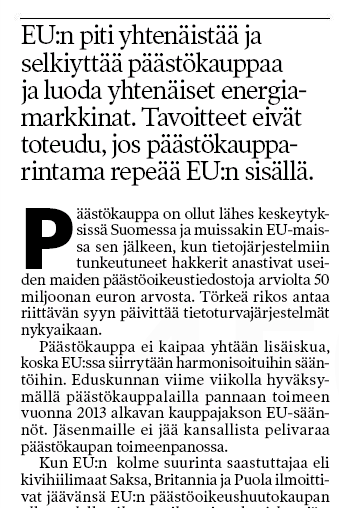 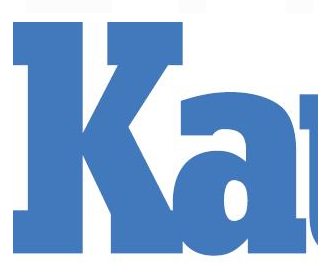 Kauppalehti‘s date of publication is always in a digital-like typeface and larger than the teasers‘ font size.

Teasers, infographics, dropcaps, headlines, subheadlines, bylines, and photo captions (cutlines) are all sans serif in what seems to be Franklin Gothic Demi Cond (but I know it’s not, this is just the closest I could find in comparison to it). This would leave me to believe that the most important information should be in sans serif, and all else that is serif is secondary. However, it bewilders me because the flag and sigs are in serif–these I would imagine are very important entry-points. The folio is also in serif, and that’s not really important since jumplines do not exist in Kauppalehti. This confuses me not only in a super analytical way. However, I do believe they are consistent in that they always have  sans serif headline and serif deck and body copy–unless it’s a special column, in that case, the headline is in serif.

Kauppalehti‘s classifieds page (that’s what I think it is…) and its stock market page uses a sans serif typeface. As Professor Strong has pointed out, serif typeface is much easier to read in bulk than sans serif. As for shorter copy, using sans serif is fine. 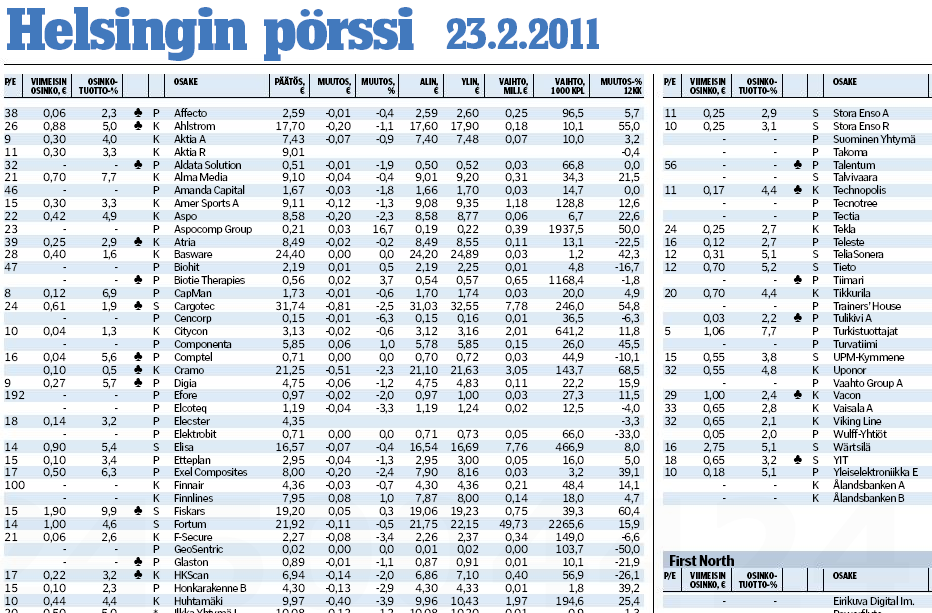 Sizing, and other font treatments

As observed, the A1 cover for Kauppalehti is very unique compared to other newspapers. The flag is obnoxiously large, as is the headline (just not as large, of course), and the deck is larger than the decks inside the spreads. The teasers on the right of the cover also use sans serif font, but the front size is somewhere in between the headline and the teasers. I think there’s way too much font size differences scrambled across the page. It seems like the news designers had too much information/articles to place on the front page that the only way they could differeniate each of them (in terms of importance) was to manipulate its font size. I’m just glad they didn’t italicize or whip out novelty type…although, the front page seems a bit like a circus already. But I think the correct word is “unconventional.” Which I don’t mind. 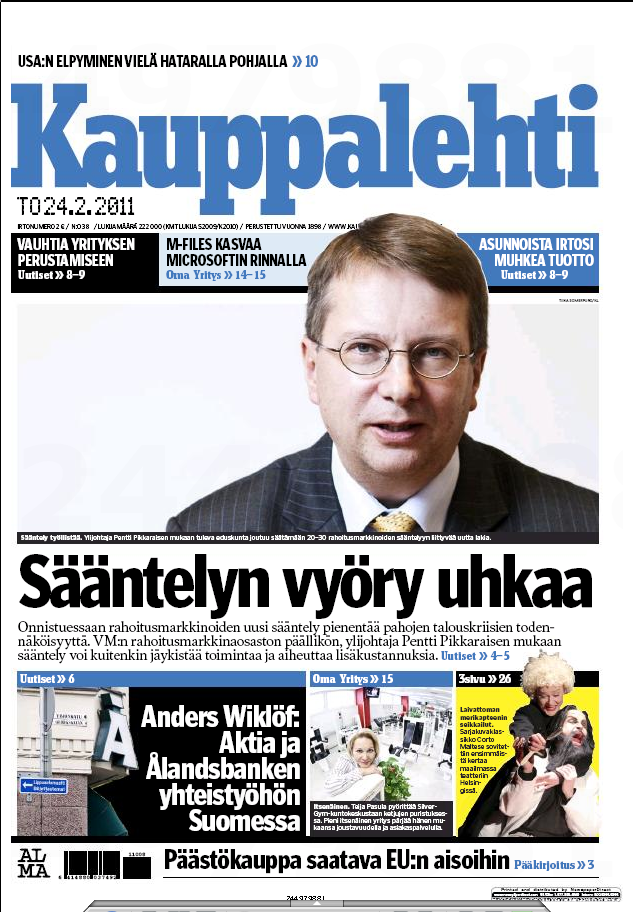 Inside the issue, the sans serif large font headlines (1st largest) work well because it’s clean and not much to read. Again serif typeface is much easier to read in bulk because the serifs guide your eyes from one letter to another. Other features’ headlines are in smaller font size (2nd largest) than the main one (and that can be differentiated by the large photograph taking up a little less than half the spread).

Much smaller (3rd largest) font size are headlines of stories featured above or to the right of the main feature. 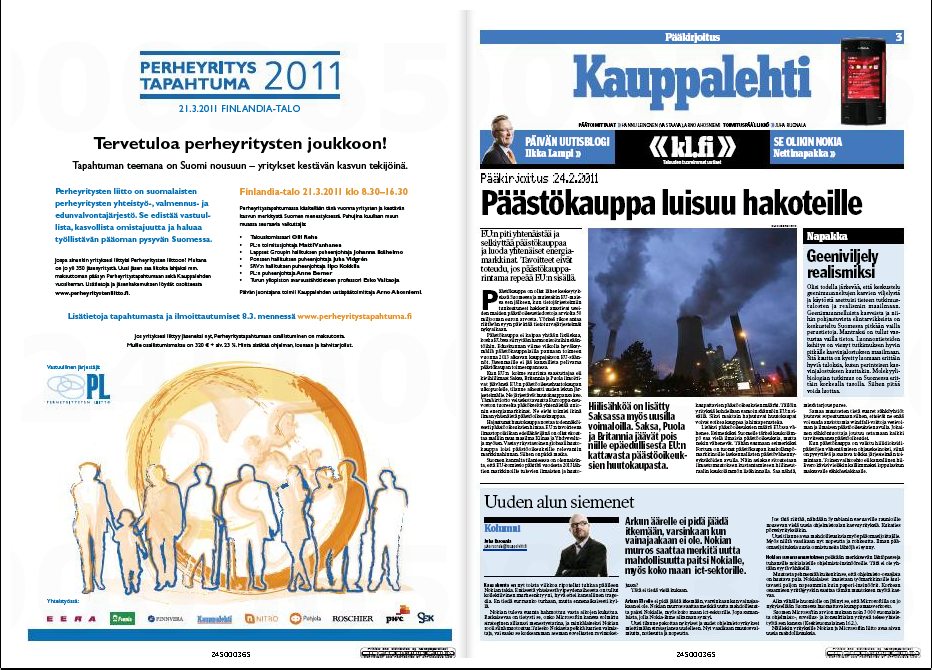 Yes. For a tabloid-sized newspaper, the typography is digestible and clean.

Bring in any criticism on design choices and execution…and what would you suggest?

After reading about what Kauppalehti is about and who it caters to, I became very disappointed at its lack of professionalism (design-wise) and its sharplessness. I do appreciate that it has fun with design treatments like using cutouts, text wraps on images, and fun infographics. But maybe this is what Kauppalehti is trying to express: business IS fun. Maybe the unconventional ways of presenting business information and news is attracting more readers.

I also really like that they take liberty in plastering faces of writers and business professionals into their articles–this is a great way to get faces out there to the rest of the business world. There was a pull-quote that had a cutout of the man’s face facing the quote against an inverse type (black background and white font)–that’s great. As a reader, that would be the first thing I want to read when looking at the article. Also, they need to watch out for widows they leave when text wrapping.

The reconstruction is attractive, but at the same time, loses its professionalism when compared to another business newspaper like, The Wall Street Journal. I guess it’s not fair to compare a broadsheet to a tabloid newspaper. I think that if Kauppalehti turned into a broadsheet, it would be the hip and fun version of WSJ; and I’m convinced it will increase readership/circulation. 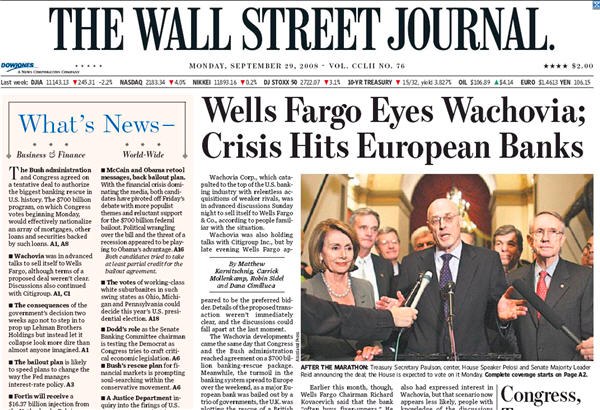