Kauppalehti does not use a varied of headlines, rather, it almost always uses the banner type of headline in which the headline is followed by a short deck directly below it, and left-aligned of the article. Kauppalehti limits its headline word count from 2-5 (sometimes just one, but hardly). A majority of the time, major headlines as well as other nearby articles only use three Finnish words as its headline. Longer headlines with five words are usually the main feature of the spread. The front page’s main headline is never longer than three words, and always accompanied by a deck. This is perhaps a great strategy for readers to get a quick glimpse and headlines therefore must be witty and well-thought out. This is a stylistically different approach from American papers like The New York Times, but also similar to those like The Daily News.

Kauppalehti occasionally uses other forms of headlines such as raw wraps for enclosed stories within a spread, and sidesaddle heads for shorter (and syndicated) blurbs or articles. These often times do not have accompanying decks. 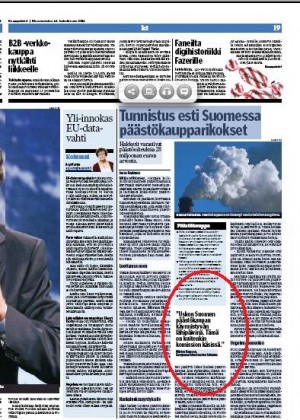 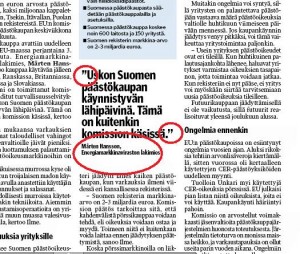 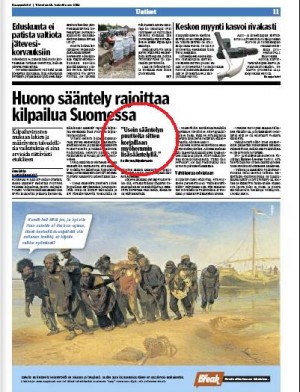 Kauppalehti rarely uses pull-quotes. When it does, it is usually two or three times throughout the paper. It is very particular in that it always uses two of the same apostrophes facing the same way (tails to the left). I’ve made two circles around those quotations. It is always attributed under the quote itself. It will state the person’s name and position, or just the name if the position need not be in the equation. It’s very plain, and there’s nothing design-y about how it’s placed and formatted. It’s quite boring, actually–which I feel does not fit Kauppelehti‘s voice and character.

While both cut lines and captions accompany photos (and sometimes the terms are used interchangeably), I see cut lines as shorter and brief versions of captions, more descriptive information about the photo. 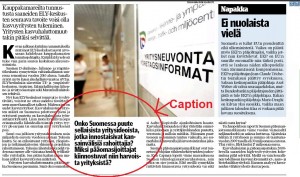 Captions like the one shown above appear only once, twice or three times at most in an issue. It is always designed in this matter: in between text of an article and below the photo it is accompanying, bolded and boxy. Not much design thought into this. 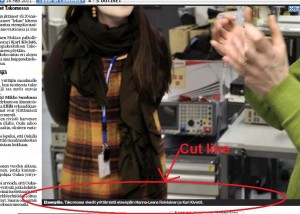 Cut lines to photos are always located below the actual photo and is using inverse text; the font color is always white and the background a light gray. Rarely does it take up two lines of text, it is usually just one sentence. 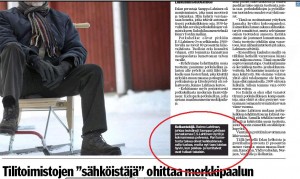 Occasionally, I observed Kauppalehti will combine both cut lines and captions together. To me, visual-wise, it’s not quite a caption and not quite a cut line. Thus, I combine them together. It follows the rules of both, a lengthy caption, but also a cut line in that it accompanies the photo.

Here are the following examples of section heads and department names in Kauppalehti. Simple, inverse text (blue the background, white the font color), ribbon-like and bleeding across the pages, and the page number is always located at the ends. As you will see below, the department name will show up on the left side of every spread in an extremely large font size before it appears on the top line in the spreads that follow.

The department name on the right is titled, “Uutiset.” It means “Reports” in English.

Another department name is called, “Oma Yritys.” It means “A Company” in English.

The bylines contain the writer’s full name and e-mail contact. In some cases, it is also accompanied by a photo of the writer. It does not say, “By _____.” It simply shows the name and assumes the readers will know that is the author of the article. This is a clean way of presenting bylines. I think the “by” is unnecessary as the name itself is obvious of the author’s name. It is also a matter of design whether or not readers realize that is the byline. If it were not place directly below the deck, then it’d be questionable otherwise. 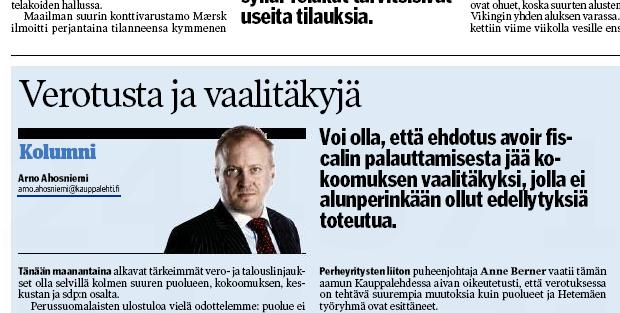 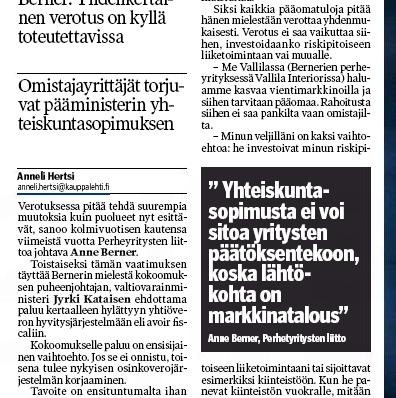 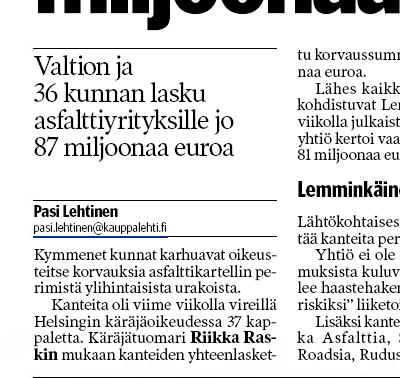 The promos and teasers are never conversational. They are short and brief, and looks similar to headlines (not in words, but in construction and length). I personally find this unattractive and unprofessional. It shows no fine line between what should be a teaser but could also be used as the headline of that story. Some teasers that may seem short, are in reality a semi-complete sentence when translated in English. The teaser on the right side of this example translates into something about this guy bringing Europe…and prevailing (sorry, freetranslation.com does not correctly translate this). I guess, because this is not a broadsheet, there must be less letters and words to a page. At the same time, keeping in mind the audience, it is important to make sure headlines and teasers are short but attractive (businessmen have very little time).