The main sections of Libération include: Evenement (Event), Monde (World), France, Economie (Economy), Terre (Earth/Land), Sports, Rebonds (Rebound/Recovery), Vous (You), Culture, Ecrans & Medias (Screens & Media), Grand Angle and Portrait. Among these, the sections that occur most frequently in the editions are Evenement, Monde, France, Economie, Vous and Culture. Other sections may appear depending on the issue.

The overall layout of the publication is that hard news stories appear at the beginning of the newspaper. It starts out from global news, then local news (within France), and then culture and entertainment towards the end. 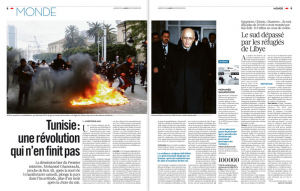 Most of the time, Libération does not have a single local front page; it usually includes a spread. In fact, it looks more like a regular inside page than a front page. This is completely different from a traditional newspaper local front. 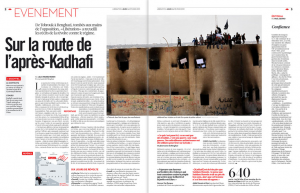 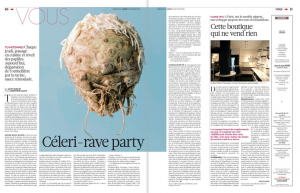 Libération’s local fronts have a lot of dominant images compared to the other inside pages. They usually set the tone of the type of stories that are going to be covered in that section. For example, in the Evenement section shown above, the photo reveals the gravity of the situation. On the other hand, other local fronts, such as Vous or Culture, may include an illustration or an image that is much less serious that will fit the personality of the section. Moreover, the headlines on the local front page are usually really big. 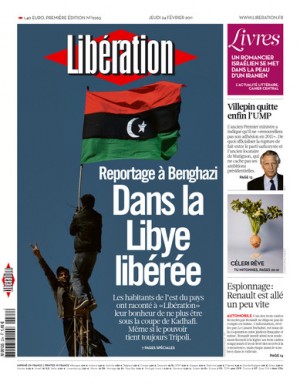 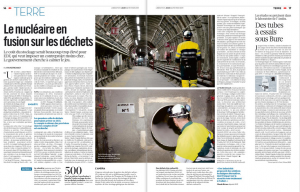 Overall, the local fronts are similar to the A1 in that it is very photo oriented. In addition, they both use bold sans serif typefaces to make the headlines or decks stand out. However, the headlines on the A1 are in general a lot shorter than the ones on the local fronts. Also, because the local front pages are more of a spread rather than a single page, the A1 definitely has a more cover page feel to it. Also, while the A1 does not contain any advertisements, some local front-page spreads may include a small ad.  In addition, despite the consistent use of the publication’s signature colors (red, white, black, blue and magenta) on the A1 and local front pages, they have a completely different look. 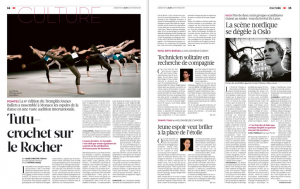 As for the content of the local fronts, it has a nice mixture of both hard news and soft news. As aforementioned, the publication starts out with hard news stories, such as current world news (i.e. Egypt, Tunisia and Libya). In the France section, it reports various stories ranging from politics and science to coverage on different regions of France. The rest of the local fronts cover stories that may be of interest and entertainment for the readers, such as featured stories on celebrities, arts and media.

Libération uses several techniques to create hierarchy on the inside pages, such as photos, colors and text. 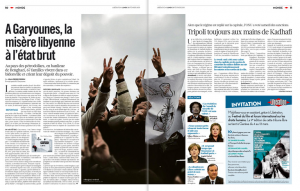 It uses a lot of images/illustrations not just on the A1 and local fronts, but also on the inside pages. Like the local fronts, the images set the tone of the stories. There is a visual element/image on every single page of the publication. Usually there is one dominant image on a single page or a spread or a couple of medium/small sized photos. 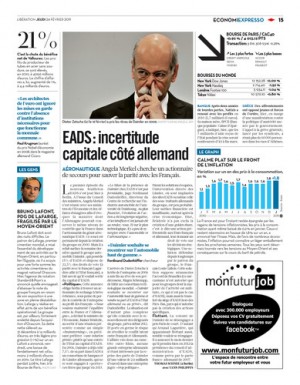 In addition, it effectively uses colors to create hierarchy on the pages. There are colors on every single page of the publication, and each is done purposefully. Sections, sub-sections, pull quotes and infographics are usually the colors of the section flags (red, blue and magenta). But colors also include the white spaces on the pages. Although the dominant images and various colors can seem a bit overwhelming at first, the great usage of white space creates a nice balance between filled and empty spaces on the page. 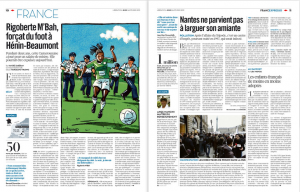 Both serif and sans serif typefaces are used on the inside pages to create a nice contrast. All of the body text and pull quotes are in serif, while the headlines are in either serif or sans serif depending on the story. Usually, the body text are placed towards the bottom half of the page, while the dominant image is placed on the top. The images capture the reader’s attention and lead them to read the story below. Furthermore, the inside pages have alternating grid systems. As shown above, some pages use the 5-column grid while other pages use the 6-column grid. It can be confusing at times, but because of the effective use of white space, it is not distractive to the reader. 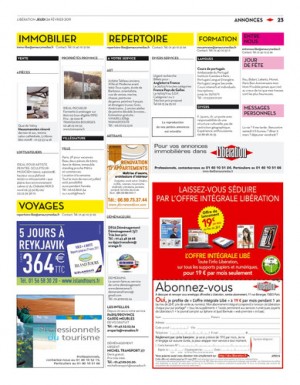 As for advertisements, it varies from day to day, but approximately 10 percent of the inside pages have ads. Ads usually take up the whole page or the whole spread. There also may be tiny ads in the corner of a page. 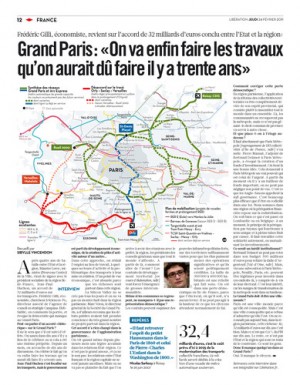 Other visual elements of the inside pages include charts, cartoons and illustration. These usually complement the stories and allow breaks for the audience from reading a heavily text-based page.

Overall, I personally think that the inside pages of Libération are designed much better than the A1. It is clean, readable, consistent, sophisticated and innovative. The A1 tends to be random because the nameplate shifts positions, and sometimes a single dominant photo covers the whole page. On the other hand, the inside pages have lots of white space. For the most part, it has a pretty consistent look, while it still leaves room for innovation.