Serif Central. Where the serifs as? All over Publico (Portugal), not to be confused with the Spanish newspaper under the same name. At first glance, Publico is just a sea of serifs waiting to be read. This choice to use a serif typeface throughout the entire paper was a bold choice and definitely didn’t go unnoticed in my book. I think it provides a specific sense of being elegant and timeless, while also traditional. And it doesn’t seem like too much especially because the ads on some front pages use sans serif typefaces. 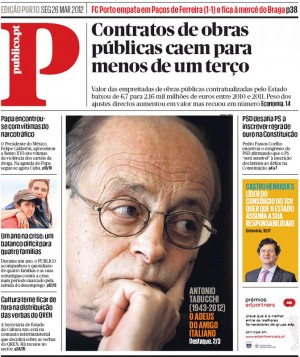 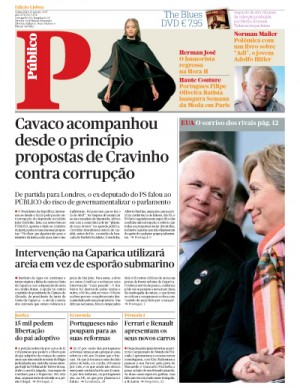 In my research, I found that Publico uses a custom typeface called… Publico. But this typeface’s journey had a long road ahead. Publico first adopted this typeface back in 2007 during a major redesign of the paper. The typeface was originally thought to be Haçienda. But after some slight modifications, Mark Porter and Esterson Associates were on to something. “We increased the sharpness of the serifs, to play against softer ball terminals, and kept the contrast high as the weight increased,” the Publico biography states. I think that it’s a bold decision for the publication to rely on one typeface for the entire issue. Designers must have to get extremely creative in order to work within a single typeface. Fortunately, there are many options within the single typeface. The headlines vary from Light, Roman, Medium, Semibold, Bold, Extrabold and Black weights, with italics, while the text size uses Roman, Semibold and Bold weights, with italics.

Personally, I really like the typeface. I think using the single one creates a strong level of consistency in the magazine. It also presents a strong front towards the reader. Looking at the images of the magazine brings me back to when we discussed what we wanted for Front Page Africa a bold design. And I think that Publico brings forth a consistent and strong design. And with consistency comes trust. The red color accents the strong theme. One thing that I noticed is that the navigation titles on the website publico.pt uses a sans serif typeface. I was unable to figure out which one it is, but I think it was interesting for them to make this decision. I’m not sure why it was done, but I think that it may deal with that fact that reading on the web is a different experience on the internet than it is on paper, and all that serif may come across a bit overwhelming.

I also noticed that the print version has a color palette that includes dark grey, blue, yellow and orange, while the web version sticks to only red and black. Again, I think that this is an attempt to keep the web version simpler as a way to prevent web users from being overwhelmed.