Mother Jones, a bimonthly politically left-leaning news magazine, has a trim size of 8 inches wide by 10.5 inches high. While it features a non-modular construction, it does contain a few recurring elements that seem to appear on every cover.

The very top of the magazine cover often contains two or three teasers that are sometimes accompanied by a small graphic that pertains to the story being promoted. These teasers often contain provocative phrases such as “Sex and Silicon Valley” or pose engaging questions such as “Does Raw Milk Kill?” The Sept./Oct. 2012 issue uniquely features a more irreverent teaser, stating “Wham, Bam, Sonogram!” which seemed to contrast with the more direct and to-the-point nature of the teasers portrayed on other issues.

Underneath the row of teasers is the magazine’s flag, which spans the entire width of the cover. The logo’s serif typeface is simple, yet powerful and dignified. Although it is often unobstructed by any other design elements, there are   exceptions to this rule: The cover of the July/August 2012 issue in particular bucks this trend by featuring an illustration of a middle-aged man firing two guns while standing behind the ‘M’ in the flag. 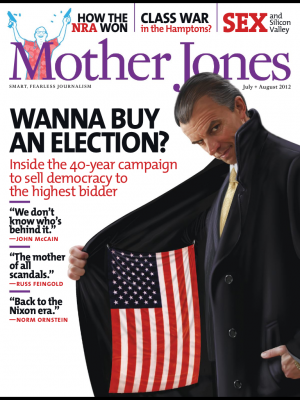 Aligned to the left immediately underneath the logo is the magazine’s tagline, “SMART, FEARLESS JOURNALISM.” Stated in all caps, it succinctly states the magazines high-bar for journalistic quality, allowing any passing reader to know that this magazine doesn’t peddle in lightweight, fluffy coverage. The issue date is aligned all the way to the right of the tagline.

Below the flag and tagline, the magazine always devotes the rest of the space to spotlighting the main feature of the issue. These headlines are typically in a bold, sans-serif font, which gives them a dominant weight on the cover. One exception to this, however, is on the most recent issue (below), in which “WITH THIS?” is in the sans-serif bold typeface, preceded by a serif-font headline that reads “Lower Crime. Raise IQs. Cut the Deficit.” 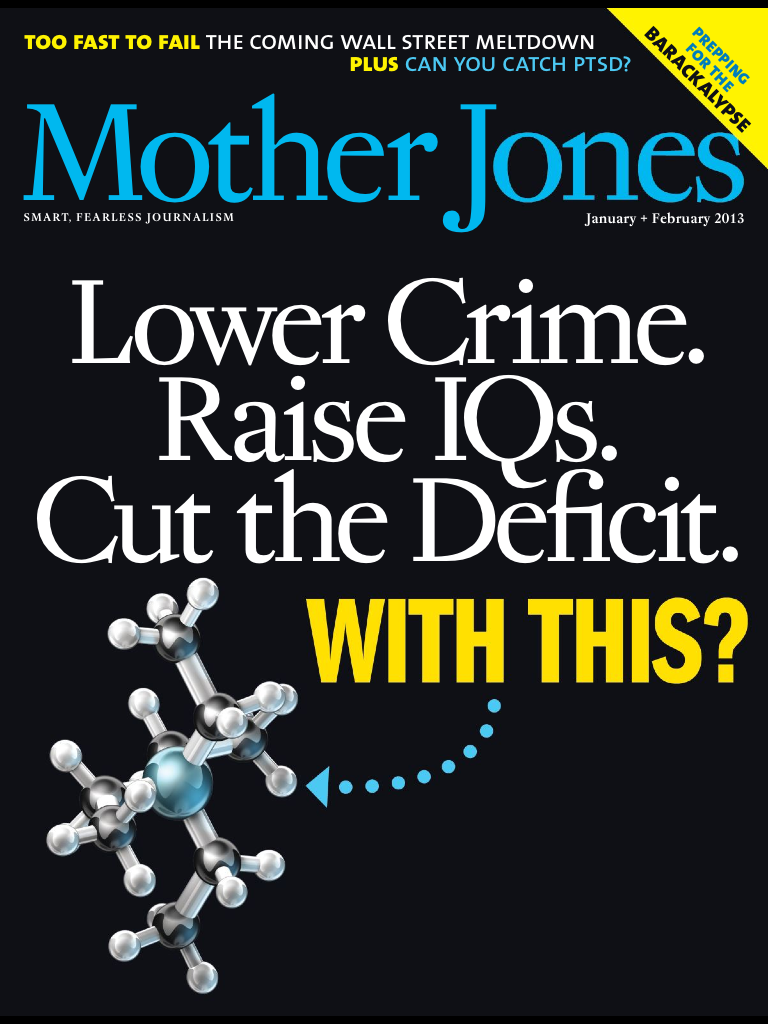 Mother Jones exclusively uses illustrations on their covers, a unique and unusual approach for a modern news magazine. On the ‘Illustration Submissions’ page on their official website, the magazine rationalizes their use of cover illustrations by stating “Mother Jones sees powerful, smart illustration as an essential part of serious journalism.” This quote further reinforces what was already expressed in the magazine’s tagline: knowledgeable, well-regarded journalism is of paramount importance both within the magazines content and its brand identity.

The cover images are simple and eye-catching, yet aren’t as obviously dominant on the cover as images usually are on other magazines such as Time, Rolling Stone or Vanity Fair. The most recent issue, for example, features a black background and a simple three-dimensional construction of a molecule in the lower left corner, an element that is dwarfed by a headline that takes up close to two-thirds of the cover space. Previous covers follow suit in a similar fashion, with headlines and illustrations often vying for dominance on the cover.

With all of the elements of the cover taken into consideration, Mother Jones clearly opts for a simple, legible and elegant layout. The magazine’s cover design can almost be described as minimal; they are never garish or overcrowded. Instead, the magazine chooses to attract readers with engaging headlines and cover illustrations that cleverly convey the feature story. Rather than use photos of celebrities or other public figures like most magazines, or employing provocative, controversial covers like Newsweek, Mother Jones lets its content step to the forefront; the feature story itself acts as the magazine cover’s primary draw.

For their Nov./Dec. 2012 issue, Mother Jones decided to move forward with a bold idea they’ve only tried a few times before: a split run cover. Subscribers and newsstand buyers were each offered a completely different cover story and image from that particular issue. A lighter, more accessible story is featured on the front cover of the newsstand edition, whereas a more comprehensive investigative report on challenging subject matter is given the cover space on the subscriber issue. Although magazines such as Entertainment Weekly often employ the gimmick of multiple covers, the concept of creating different visuals for different buyers allowed the magazine to promote different features in an issue that would appeal to the sensibilities of different readers. 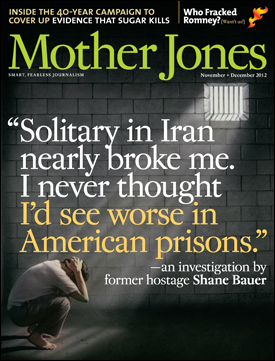 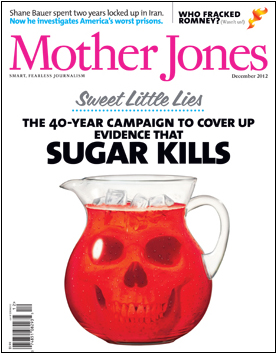 Many magazines would simply run headlines for both stories on the cover. However, Mother Jones chooses instead to highlight only one feature underneath the flag, even if it means printing up two separate editions of the same issue. The magazine chooses not to shatter the simple elegance of the cover presentation, especially when certain heavier topics such as gang rape in Haiti are the stories being promoted. This simple layout gives the magazine a dignity well deserved for a publication that consistently offers journalism at such a high-caliber, a sentiment the magazine’s well-educated and highly intelligent readership would agree with.