At first glance, the overall design of Mother Jones’s website looks very clean and simple, which enables me to navigate all the materials from the top to the bottom in the website. As the nameplate, which is also used in Mother Jones’s print version, is placed at the top of the website and the navigation bar is placed right under the nameplate, it gives viewers a sense of what this (website) magazine is about. 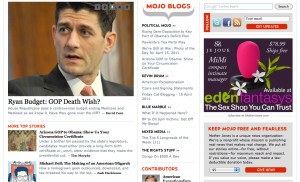 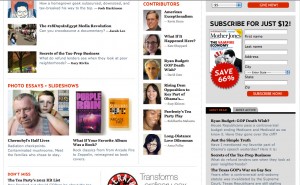 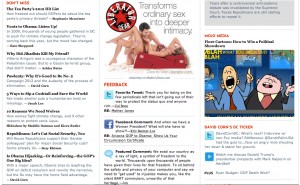 However, one thing that disturbs me was the way that the website displays advertisings. The two advertisings, which are about sex, on the main page seem too large, and I didn’t understand why Mother Jones placed such advertisings on its main page. If I saw such advertisings on Cosmopolitan’s website, it might be not awkward. However, what does Mother Jones do with such advertisings containing sexual materials? I think that even though all magazines depend on the revenue generated by their advertisers to stay in business, it is also important for all the magazines to consider what advertising they will place on either their prints or websites. Mother Jones should have picked advertising, which reflect its personality—a news magazine.

Until I scrolled down to the bottom of the website, I wasn’t able to figure out its grid. Because just like other websites, its columns are not evenly divided. But, Scrolling down toward the bottom, I see the three evenly divided columns. So, I would say Mother Jones’s website presents 3-big-colum grid with use of half columns. Rather than having five or six columns like newspapers, the three columns make me easier to follow all the materials displayed in its website.

Overall, Mother Jones uses two colors—black and red—on its website. The nameplate is also written in black, section names displayed in the navigation are also written in black with colored little boxes. If there were no such little boxes next to each section’s name, it would be very difficult to recognize the navigation bar because they are all written in black. However, once colors are added, it makes every section name distinct. Words written in red such as “More Top Stories,” “Don’t miss,” and  “Photo Essay + Slideshows” categorize materials on the website. So, under the “Photo Essay + Slideshows” part, viewers will see only photo stories. I believe that red and black look very classical and sophisticated at the same time. However, since it is a website, it would be more visually appealing to viewers if Mother Jones used more dynamic colors, rather than red and black, which are traditionally used by many publications. Furthermore, Mother Jones needs to find a particular color, which symbolizes the magazine itself. Like Time magazine, which has its own color—red and black, Mother Jones needs to have its own color so that viewers can recognize the magazine only by color.

Under the nameplate and the navigation bar, the website displays a slideshow. This is the only one that I found as in terms of multimedia. The slideshow displays five different photos and five different headlines. All the pictures are relevant to the stories, but I’m not sure they are compelling enough to attract viewers’ attention.

For the typography, Mother Jones uses Cambria and Calibri, which are also used in its print version, but different patterns are found. In its print version, there is a certain pattern: articles’ headlines and decks are written in Cambria, bylines are written in Calibri, and body texts use both typefaces. However, in its website, the headlines are also written in Cambria, but decks, bylines and body texts are all written in Calibri. The website doesn’t use both Cambria and Calibri for body texts. I think it was one of the most interesting I found here: using the same typfaces for both print and website, but a different pattern.