While I was initially skeptical of spending two full days cooped up in Drumlins being a glorified chip counter, once I got there I realized the value of SND.  News design really is its one unique field in journalism, and it was amazing seeing all of the different layouts and spreads.

I think the most important thing I learned about news design is that in order for a layout to be successful, it needs to instantly grab the reader’s attention.  Many of the designers I talked to said that they only gave positive votes to the designs that instantly caught their eye and inspired a visceral reaction.  Ones that did not meet those requirements were immediately met with a red chip.

I also learned a little something about myself: I never use to quite understand the significance of white space.  A lot of my previous design attempts were very cluttered and had a lot going on, almost to a fault.  But many of the works at SND heavily featured white space.  Now, I understand that white space lets the page “breathe” and allows the reader to stay focused on the page without being over stimulated.

Perhaps the most rewarding part of the weekend was having lunch with three of the judges.  At first I was a little nervous to join them at the table, but once there they were extremely friendly and helpful.  They told me what they look for in a design, how they started out, and why they feel design is so important.  It was also interesting to get the perspective of someone from a different country, as many foreign countries have actually seen newspapers prosper in recent years.

They also gave me some insight into what may be in store for papers down the road in America.  While they all seemed to think that papers will be around for at least a decent amount of years more, they also realize that online is the future, as well as tablets.  The problem, however, is that they don’t think either mediums are being used to their full potential and that there eventually will be better ways for publications to monetize online and tablets.  When they do, it will allow for more freedom for online page designs, and I am excited at that prospect. 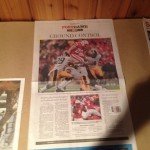 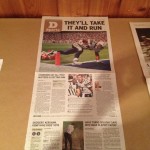 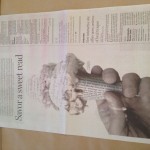 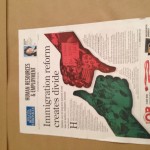 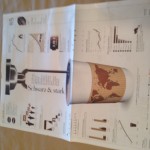