The first story I found deals with the launch of the iPad-only newspaper, called The Daily, coming in early February. The app will include content by journalists from The New Yorker, AOL, The Atlantic, and The New York Times combining multimedia and print, bringing an interesting conversation about how to design newspapers for an app. (http://read.bi/ijIfZn)

My second story deals with an interview that the Society for News Design conducted with the editor-in-chief of the Russian newspaper Akzia. Her newspaper always has innovative designs, and she encourages young designers to think outside of the box. The article can be viewed here (http://www.snd.org/2010/09/breaking-out-with-russias-best-designed/) and examples of unconventional design from the newspaper here (http://akzia.ru/pdf). 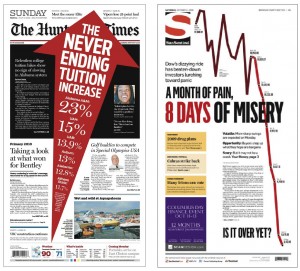 These two newspapers used large, eye-catching infographics for their A-1 page. They also used red, a bold color usually not found in newspapers, and designs that go diagonally across the page, breaking up the usual column structure of newspapers. This and more at http://www.spd.org/2010/10/cool-daily-newspaper-designs.php#more. 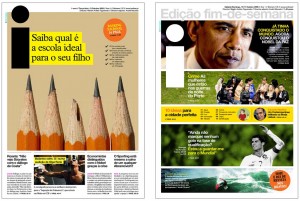 These two examples came from the Newspaper i. It is designed as more of a magazine, using graphics and illustrations along with photographs, bright colors and creative layouts. These and other i layouts can be found here: http://www.spd.org/2010/10/portugals-i-newspaper.php.