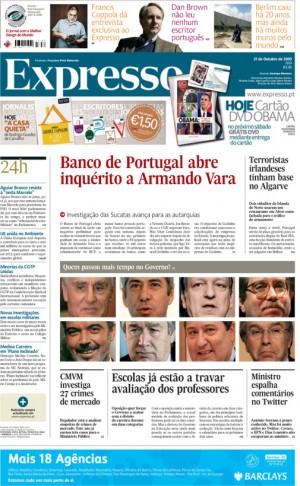 Nameplate: This is the name of the publication and how it is displayed on A1.  Expresso has a well thought out nameplate for several reasons.  First, it is timeless–it may have a modern feel to it, but not so much that in 10 years from now you will say, “Oh, that was created in 2010.”  Second, it is simple.  The typeface is easy to read and the name is clear.  It does not appear cluttered nor too spread apart–it could easily be read from a distance.  Finally, it stands apart from the rest.  While many nameplates use a dark, bold typeface against a light background, Expresso does the opposite.  Which brings me to my next concept…

Reverses: This refers to using a light typeface over a dark background.  In this case, the typeface stands out because it is opposite of what the majority is on the page.  Expresso uses reverses successfully throughout the paper, especially in their nameplate special section titles. 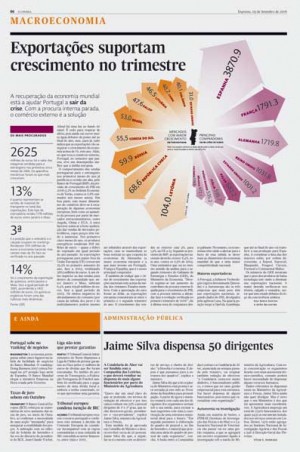 Sidebars: A sidebar is a great tool to use in newspaper design to break up long stories and to give readers another opportunity to get introduced to the story.  Sidebars tend to be a small or short story that is meant to be a supplement to the main story.  Expresso uses sidebars in longer stories, but doesn’t always put them into paragraph format; instead, key facts or numbers are taken from the story and used to create an eye-catching sidebar, like in the example above.  In my opinion, Expresso does this well because it is easier to notice a bulleted list rather than paragraphs.  So, if the goal is to get readers’ attentions, then I think the paper does this successfully.

Folios: A folio is the type at the top of all inside pages acting as a guide for readers.  Folios tend to include information such as the paper’s name, section, date and page number.  Expresso uses a standard simple folio on their inside pages, with the typeface being the same as the nameplate.  The top outside corner of the inside pages states the page number on the outside and section name next to that. (So, for example, on the left page it would read “2 Business”  on the top left corner and the right page would read “Business 3” on the top right corner.)  The inside top corner always has the name of the paper and the date.  Because of its simplicity, the folio easily blends with the rest of the paper. 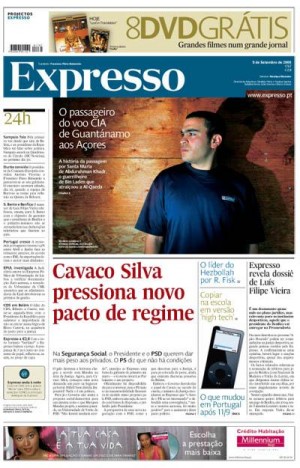 Section Flags: A section flag is a label for anything that is reoccurring on a regular basis in the paper.  Everyday Expresso features the major events that have happened in the past 24 hours in the furthest lefthand column on page A1.  This is clearly identified by the “24H” section flag at the top of that column everyday.  It is always in the same color, size, typeface and place.  This clearly works because I started to expect it there just after seeing two or three covers.

Boxes: Boxes are exactly what they sound like–a box around a story, picture, graphic, etc.  Expresso actually shies away from using boxes in their layouts–there may be rules, but they are never closed off.  I think this is a good decision on the part of the paper because boxes look and feel bigger and heavier than rules just leaving the corners open.  This gives the pages a more spread out feeling. 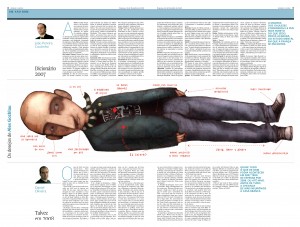 Bylines & Credit Lines: A byline is where the name of the story’s author is written.  These are typically found after the headline and before the story.  However, sometimes they may be placed at the end of the story.  A credit line is the name of a photo’s photographer.  These tend to be either underneath the photograph or running vertically beside it.  Expresso tends to use the typical placement of bylines.  However, in feature stories they change it up a bit, as in the example above.  Here, two well known authors have their picture and underneath that is their name in a matching typeface color.  The word “by” is never used, but it is not necessary–the reader clearly knows that each man is the respective author of the article.  Also, this gives more emphasis on who the author is–it is not your everyday writer who threw the story together on a short deadline–rather, it is someone who spent considerable time and effort on the piece.  These bylines emphasize the importance of the feature. 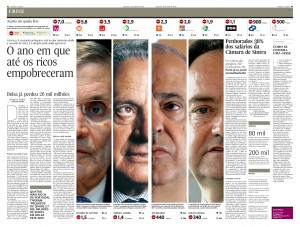 Pull Quotes: Pull quotes are a quote or sentence taken from the story and made into a more graphic element.  Pull quotes need to be important to the story, not just some random sentence pulled because the designer thought it would look nice to have a pull quote.  Expresso has used pull quotes in the example above, but again have put their own spin on it.  Often, pull quotes tend to be center justified and/or radically different color and typeface contrasting the rest of the text in the story.  Yet, these pull quotes are right justified, still black, and just bold.  The paper has continued to simplify what we are used to seeing, but it still has the same impact, if not more.

Rules: Rules are straight lines on a page often used to separate stories or pieces.  These can vary in width or stroke size.  If a rule is running horizontally it is called a cut off rule.  If it is running vertically then it is a column rule.  Expresso uses both cut off rules and column rules a lot in their designs.  However, they are all different widths.  Normally, I would think this would make the design look cluttered or unorganized, but it actually doesn’t.  The rules do a nice job of separating pieces, but they are not distracting.

Screens: A screen is a box that is filled in with a light background color that still uses a dark typeface.  From what I have found, Expresso doesn’t use screens in their layouts except when it comes to advertising.  This is helpful to the reader because it easily differentiates content from advertising.