I learned so many things about design at SND that a blog post is probably not enough room to share everything. I loved looking at the international publications. It was an eye-opener to me that newspapers in places other than the United States are fun, interesting and daring in their approach to the news. I liked how they experimented with sizes of newspapers and also how papers open. The Tiempo example below opened in the middle like the lady was unzipping her jacket. 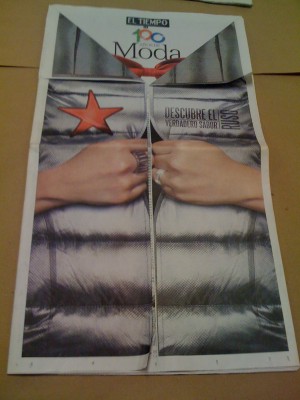 This A1 opens from the middle, as if the illustration is opening her jacket.

Another thing that I liked (and the judges did too because they voted for many of them!) were the fantastic graphics in the newspapers. One of the best I saw was a World Cup spread by a newspaper called Al Bayan. It was upstairs as well, so I am sure that many people saw it. In my section it was in discussions for a gold medal, but there was a fact error (gasp!) so the judges decided to give it a silver. Overall, I was amazed at the colors and illustrations that appeared in the papers. 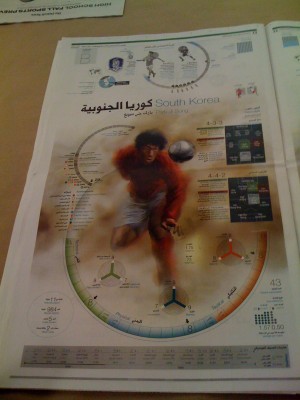 Along with innovations in special sections, the miscellaneous section was absolutely amazing. One of the standouts here was a life-sized poster of a basketball player. A different part of him came out each day and people had to collect them all. The description said that the poster appeared in windows of storefronts and on people’s walls. Other entries in the miscellaneous section were also meant to be kept¾a CD case for a mixed tape, wrapping paper for Christmas Eve. The idea of holding onto a publication is something I’d previously associated with magazines, but these newspapers are also keepsakes as well (as evidenced by the fact that students were digging through mounds of papers looking for things to take home). 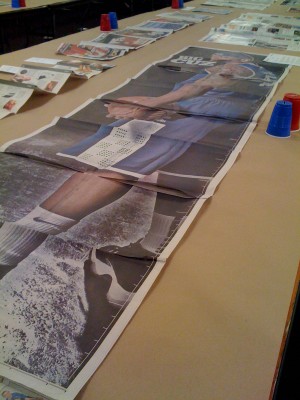 This is a life-size poster of 6-11 "Big Cuz" that readers had to collect over a span of four days.

I also learned a lot about design from watching the judges and what they voted for. There were things that I found neat and innovative at first, only to find it received a vote of 0-5. I liked the opportunity to ask judges why they liked or didn’t like something. This carried over to the medal judging, which was by far the most interesting part of SND, especially when they disagreed. It was fascinating for judges to go through why they thought something should get a medal and why it should only get recognition. I found that it is very, very hard to get a silver medal because everyone has to agree. Different designs appeal to different people. They noted that medals of distinction were very difficult to get this year.

Finally, I was so glad that I was introduced to different newspapers, especially international ones. I now really like several several newspapers, and I’ve included pictures of those below: 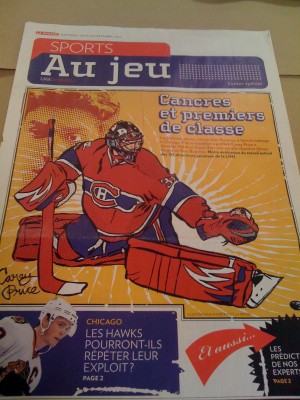 I love hockey, and I am in love with Montreal's La Presse newspaper. This sports section is a preview of the NHL season and each team was converted into comic book-like drawings. I had to fight someone for this special section. (I won.) 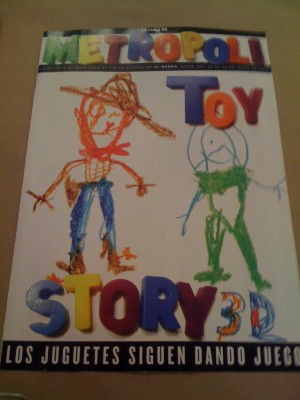 My favorite section to facilitate judging were news magazine covers. El Mundo de Metropoli had about seven entries, and I loved them all. 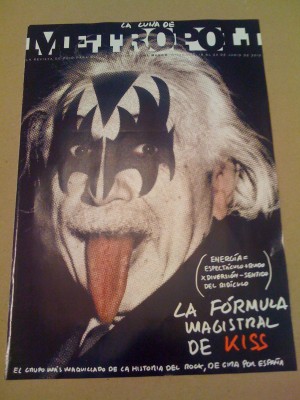 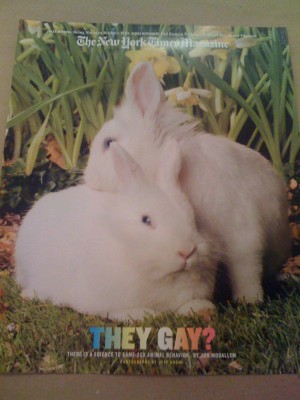 The New York Times Magazine also had some great covers. 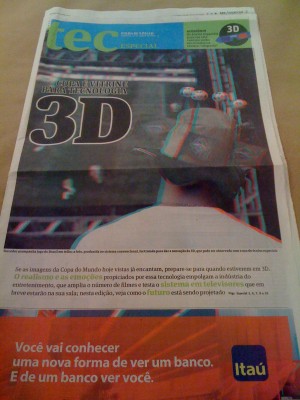 This newspaper, Folha de S. Paulo, quickly became one of my favorite papers. This is a 3-D issue they made. There were several 3D entries, and I thought it was interesting how far designers are trying to stretch the boundaries of paper.