Wow. SND was so much more than I had ever expected. Walking in the first day, I was amazed at the number of tables and entries that filled the ballroom. I was nervous to see what we were getting ourselves into. That all changed after the first round of judging. It was nice to see that these professional designers gave us the same respect as we gave them. While we were all there for a greater purpose, everyone was thrilled to talk with the students about their future plans and how they were enjoying the weekend. By the end of the competition, I was sad that it was ending. It felt like a secret society of designers and we all had the privilege of being a part of the festivities.

My favorite part of the weekend was the medal ceremonies on the first day. I was helping facilitate in the long form section. I was fascinated by the comments the judges made about all of the pieces up for a medal. Since it was the first day, I was still trying to get a sense of what a great design looked like. After the medal ceremony, it became clearer what the judges were looking for. They all had such an eye for detail. In long form, it’s important to keep those details moving throughout the entire piece. If one page looks different, it throws off the entire section of the paper.

The judges also looked at the pace of the sections. When designing one or two pages, it probably seems easy where to put text and where to put images so that readers aren’t bored. But when you have 10-20 page sections, it’s so important to keep the reader moving throughout the piece. The pace matters so much, because you want the reader to make it through then entire story.

Consistency of material is also important. One piece that was up for a medal was a story by the Washington Post on six of the Republican candidates. The page layout of each page was identical. They all provided the same content for each candidate. Everything seemed perfect, but the piece didn’t receive a medal. Why? Two of the candidate’s images were cropped differently than the other four. These two images were not as zoomed in as the others. Also, four of the headlines were set up with a “The —–“ construction. The other two were phrased differently. These two factors—the photos and headlines—were the reason this paper didn’t receive a medal. It really showed me how important it is to keep things consistent from day to day.

The most important part of the weekend for me was to see how much the design of a paper or magazine is important to the story being told. The way a designer places each aspect of a page is important and can be the difference of a person reading that story or not. It also adds meaning to the piece. Designers use images and illustrations to accompany text, and sometimes the graphics do a better job at telling the story than the text. 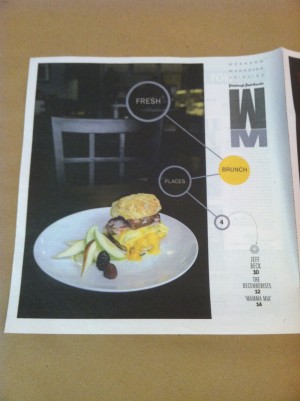 I was instantly struck by this design. The picture is so vibrant and I love how the designer brought the colors from the plate into the design with the yellow bubble. The design is clean and it uses whitespace nicely.

I’m really excited to start on projects this semester and use the knowledge we gained this weekend. The weekend has also given me a new perspective on where I might want to go after graduation. I always had plans of heading to a magazine, but I wouldn’t be disappointed at all if I had the opportunity to design at a newspaper. 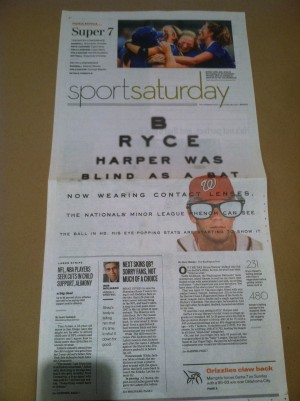 I thought this design was very creative. The article is about the athlete's eye sight, and the designers turned the headline into an eye chart. I was blown away at many of the sports pages this weekend and how creative the designers were. 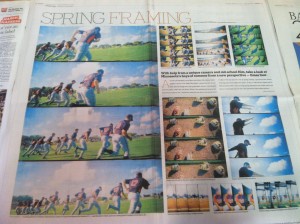 This is another sports page that I thought was interesting. The first thing that caught my eye was the headline "Spring Framing." This is echoed in the mulitple frames of each image. Many sports photo spreads have several action shots, but you don't actually get to see the action progress. This page takes you through the motions of the player and allows you to experience the same movement. 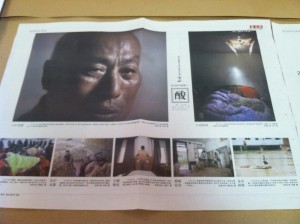 This spread is one of four submitted by a Chinese newspaper. Each spread represented a different taste. I believe this one represented sour. This spread was a silver medal winner. I liked this desgin because it let the pictures tell the stories. There is a short caption for each image, but the design relies heavily on the images and the design. There is hierarchy shown with the different sizes of the images as well. 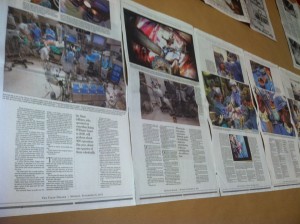 This entry was up for many medal discussions throughout the three days. The judges really like how indepth the reporters were able to get with the story. The images are just incredible in what they were able to capture. The design is consistent throughout the many days of reporting. I don't remember how many days this story stretched, but it was at least 10 different days of stories. 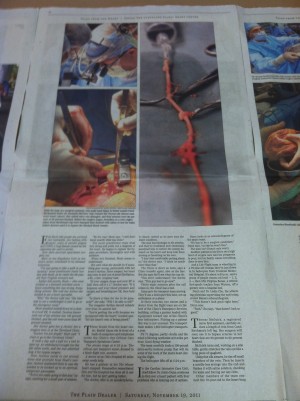 This photo shows how close reporters were able to get. One judge was amazed at how the story tells all the sides of a heart transplant and allows the reader to experience the surgery too.