My weekend spent at SND was truly an amazing experience. All the extraordinary people I got to meet and the thousands of newspapers I got to see is something that will stay with me forever.

Coming into SND the first day, I had no idea what to expect. All of the tables, newspapers and cups seemed so overwhelming to me. As I read our packet about all the awesome designers from around the world and they’re numerous accomplishments, I became ever more overwhelmed. After getting used to how SND was run and finding out how easy it was to meet and talk to everyone, I began to enjoy my weekend.

One of the cool things about this weekend is how excited and willing everyone was to find and judge good design.  Knowing that there is hope for newspapers and magazines in the future not just in the US, but also around the world is great news! (Ha).  Many of the judges and facilitators I spoke too talked about how they felt newspapers and magazines would still be around in the future, but also recognized the new technology of tablets and online resources that would be playing a major role along side print.

At the beginning of my time spent at SND, I was very curious to understand what actually qualified as good and bad design and how that could be distinguished. As I would set up the cups, I would take pictures of the ones I thought were good design. I was confused when many of the ones I thought were good design were tossed out. I began to follow around the judges to see which ones they thought were good, and then would study them to try and decipher why those ones were picked over others. As the weekend went on, I began to gain a better grasp on why ones were stronger in design than others. Learning how to pick out good design and then incorporate good design elements into my own work is hands down the best knowledge I got out of SND.  I feel so privileged being able to be in this class, as well as have attended such an inspiring event. One of the designers I had a strong connection with was Tippi. I am so thankful for all the inspiring and useful tips and pointers she has given me about design. We both walked around together looking at the different news designs why Tippi helped me to point out which ones were good design and why others were not as strong. Tippi helped me to decipher good versus bad design by putting it into a simpler way. First, the design MUST be eye catching. If it is not even exciting at first glance, why would anyone want to pick it up to read it? Second, the concept must make sense. SND and our news design class have allowed me to recognize the extreme importance it is to read the content of the article before designing for it.  The headline and text should relate to its surrounding design in order to be good design. Third, you must think about how the entire newspaper is executed. Do both the text/headline and design work well together? Does the text compliment the art or make it stand out? Does either the art or the text take away from one another? These are all important questions to ask yourself when deciding on if something is good design or bad.

Another aspect of SND that was an extremely rewarding experience and opportunity was being able to judge a section of the newspapers. Being able to compare the ones I picked out as good design to the ones the judges thought were good design was a great way to gage my personal design skills. My favorite part was talking with the judges afterwards and being able to ask them questions as to why they chose the winners and why some rejected newspapers were not picked. Our discussion with the judges helped me to explain why I thought certain aspects were good design and realize why others were not as good. I also realized I had the same thoughts and opinions as some of these amazing designers, which made me feel good knowing I knew what they knew and could potentially be as good of a designer as they are in the future! 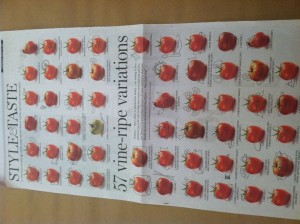 The page struck my attention due to its combination of photographs and illustration. The black line illustrations drawn on top of the tomatoes, each one so different and new were a great way to show a tomatoes variation. Using both photography and illustration is something you don’t see very often. I was happy to see this page was also very well liked by the judges and was selected as an award of excellence. 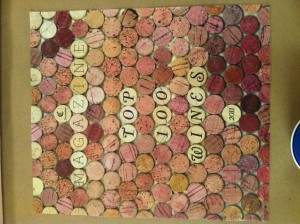 Within the features section, the use of repetition was a very well-liked theme between the judges. This magazine cover really caught my attention because of the different colors and repetition of circles. I was unsure at first from a far what all of the circles represented, but as you get closer to see all the details and read the headline, it becomes clear that the wine corks are a very different and unique way of portraying wine. In the judges discussion, some judges did not like the design as much due to the corks on the outside being cut off in an awkward way. Others felt that the corks being cut off at the edges of the page made it increase the impact of all the wines they were trying to show. Then there was the conversation about if it mattered if there were more than 100 corks on the front page when the headline read “Top 100 wines” (Yes, there are more than 100). 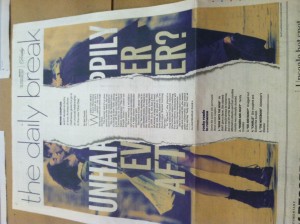 This page resonated with me on many levels. First, I thought it was very clever how the designer decided to make it look like a page was ripped in half with the words in the middle. The split image made me want to read the headline/text to figure out why this was done. After reading the headline, the designers decision to make it look like a rip not only between the paper but also the image of the two people on the paper, I thought was a great idea. I think this is a good example of how reading what the article is about can really improve the design and readability of the story. 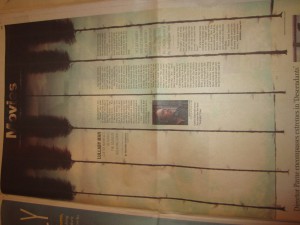 This page is interesting by the way the text is positioned within the illustrations. The way the text ends within each column is very unique because it increases as you read from left to right. The large amount of white space that is used helps the viewers to more easily read the text. 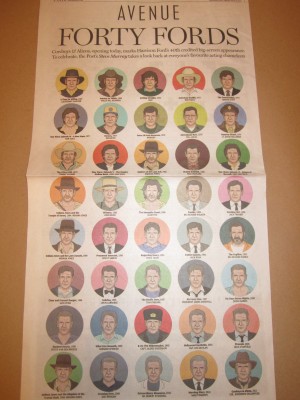 The wide variety of color in this illustration is what initially caught my eye. When looking closer to see the people portrayed in all of the colorful circles, I realized the each person was actually the same person! This page was a winner in my eyes because not only did it have a compelling illustration, the illustrator did an amazing job of connecting the image with the story in an interesting way.