Warning: ftp_mkdir() expects parameter 1 to be resource, null given in /home/customer/www/587.claudiastrong.com/public_html/wp-admin/includes/class-wp-filesystem-ftpext.php on line 560
 SND & ME – PUBLICATION DESIGN

When I woke up Saturday morning, I really did not know what to expect. I’ve never been good at waking up early, and I was whining in my head about being up before 9. A cup of coffee and cereal later, I was dressed and ready to go. Still, I was more apprehensive than excited.  I am shy. I struggle with meeting new people. However, I forced myself to acknowledge the importance of this experience: both making connections with my peers, but professional ones as well. SND would not have been rewarding if I had remained my usual introverted self.

My first interaction of the weekend was with Alejandro, the judge from Buenos Aires.  He asked to borrow a lighter, and because I happened to have a bright blue one, I obliged. Minutes later he returned to me a grey lighter. Not mine. Not the one I gave him. This initial interaction, though not educational, did serve in calming my nerves. I realized that while these men and women are far more accomplished than I, they are still just people who make mistakes and have vices. I took a deep breath, joked with the rest of my Features friends, and started my weekend with a laugh.

Saturday night I called my parents to tell them about SND. I talked so long, and with such passion, that I failed to notice that the phone call had dropped. I had prattled on for 15 minutes with no one on the other end. I told my parents about the creativity. How I had never been around a group of people who had made me feel so inspired.  How I wished I could draw, or take beautiful photographs.  All of a sudden, I had the most embarrassing crush on news design.

The opportunity to student judge was the highlight of my weekend. Terrified, we walked up and down the rows, convinced that we would make the wrong choices. The truth was: we had paid such close attention to judging that we had picked up some inherent understanding of what was “good” design. No, we did not choose the same pieces as medal winners. However, we had eliminated the same pages as the judges. All those monotonous moments picking up cups, chips, and reading translations mattered. It changed us. Although we cannot necessarily articulate “why”, I think we all began to respect our own vision of “good” news design.

In no particular order: 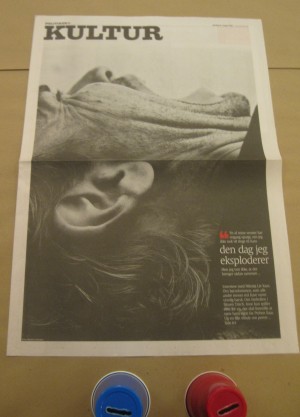 What an extraordinary way to introduce a character in a profile piece. Surpassing the tired choice of a headshot, this photograph provides emotion and personality. I actually want to read and find out who this man is. The judges thought so too, as it went on to win an award of excellence. 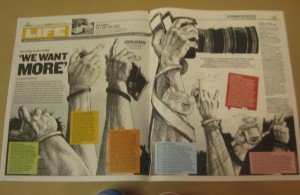 I’m a sucker for illustration. I love that the use of color is not overwhelming. it does not overshadow the hands. The arms have great detail. They manage not to look like stumps, its as if they lead somewhere. The illustration never ends. I like that the hands force your eye to look to the blocks of text. (ie, the camera brings my attention to the vertical chunk of text.) 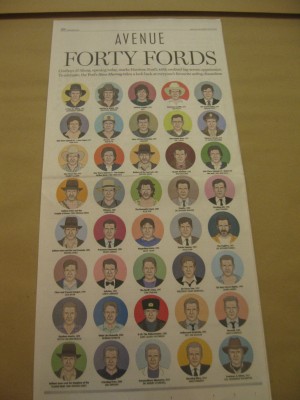 Cowboys and Aliens became Harrison Fords’s 40th big-time screen appearance. This piece was extraordinary in print, but has an interactive feature online as well. Click on the faces using the link!

This piece won an award of excellence, but the judges struggled during the awards discussion because the illustrator did not “age” Ford’s face. I’ve realized I haven’t seen most of these movies, so I have some catching up to do. 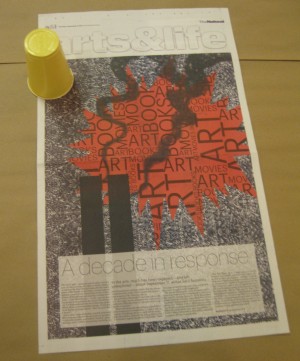 Sarah and my obsession with The National evolved into a complicated strategy to obtain EVERY SINGLE discarded page we could find. Monday, she and I discussed and traded. I love that I can tell which paper it is without even reading the nameplate. I love the modern feel. I love the use of white space (not in this piece per se). In response to this particular piece, I got tired of seeing 9/11 pieces. It was rare to find one that was unique. This one is by no means my favorite… (that honor goes to the 9/11 piece done by the Cleveland Plain Dealer,) still it embodies The National design model and I enjoy looking at it. 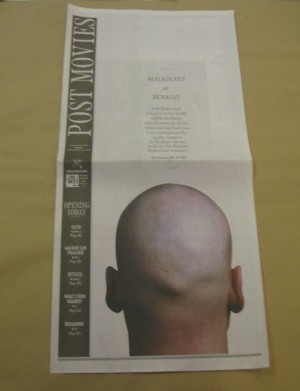 This is the front cover of a review of the Joseph-Gordon Levitt film, 50/50, about a young man’s cancer diagnosis. I was struck by the imagery because I recognized the tumor immediately. However, I was not expecting this to be a film review. It is so refreshing not to see an actor’s face or a screen shot. This is great design because it is simple, eye caching, and it made me want to read the article.