The Society and News Design Conference was an event filled with insightful critique, intended design and intensive creative knowledge. It was absolutely something I was not expecting—although I’m not quite sure I was even sure what my expectations were. Although we were only there for the span of three days, each hour was filled with a new perspective into the world of not only news design—but where design in both the magazine, and digital realm, is headed. It was stimulating, eye-opening and nerve wracking at the same time. It made me really question just how much goes into the creative process of putting together what so many of us take for granted—but at the same time pushed me to understand that the power of creativity is unmatched when really thought out. Some of the designs that I was lucky enough to come across were so awe inspiring that it left me studying what was in front of me down to the last horizontal line. The only thing I could possibly compare it to is like having a piece of candy for the first time, you want to savor it as long as possible before the taste runs out.

For me the best part of the entire conference, aside from the designs, was having the opportunity to hear the judges observe, dissect and analyze the creative decisions that were put into the countless layouts in front of them. Hearing comments like “This page works better with how they laid the pictures horizontally around the hed,” or “I just can’t put together why they thought this illustration would work,” is critique so rich with experience I tried to listen in on everything I could—in the hope that it would help mold the better designer in me. Perhaps what I think most surprised me was the openness and honesty from the judges, who despite the longevity of some of their careers, were very truthful about the shakiness of the newspaper industry. I was fully expecting them to tell me that newspaper was the end-all and be-all given the purpose of the conference, but it was quite refreshing to hear them recommend to not only focus on newspaper, but if possible, really adapt other talents and skills akin to the digital movement. It confirmed that my desire to really throw myself into iPad and online design is something that is encouraged and nurtured by such employers.

The entries themselves were really astounding, even some of the ones that were eliminated very quickly by the judges. But for a new designer like myself, just being able to see the finished product and the decisions that were put into it was a stimulating experience on many levels. Just looking at some of the simplest things like color or typeface selection, things you would generally consider so miniscule could add so much value or impact the design had on the eye. And hearing judges process of elimination for certain spreads that were would-be contenders, sometimes on the basis of a typeface or composition alone, helped me to grasp just how involved a designer needs to be with their product. It kept me on my toes throughout, just wanting to take it all in without overwhelming myself—really savor the candy for as long as I could while knowing I would not forget the taste. 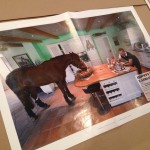 Humor. A horse in a kitchen? Enough said. This was a German magazine spread. 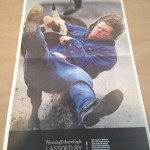 Most Compelling Image–just the emotion that is captured was so unmatched. From the Wyoming Tribune. 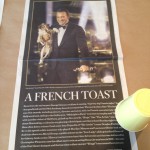 Favorite A1 from The Los Angeles Times. I think it’s hard to beat putting such an iconic event on your front page. 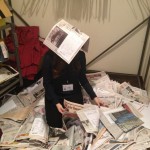 Me obviously covered in eliminated papers. 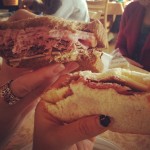 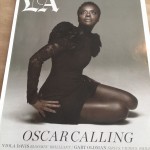 Best magazine cover. I remember seeing this spread and just thinking how revealing it is about Viola Davis. LA Times Mag cover that through use of simplicity really gave her such depth–something that led her to her Oscar nomination. 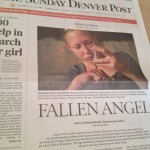 Best Headline–the story was about a drug addict named Angel so it was a great play on words. From The Sunday Denver Post. 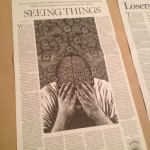 Favorite Photo Illustration. I love any illustration that forces you to do a double take–look closely on this one and you’ll see that you in fact are “Seeing Things.” From the National Post. 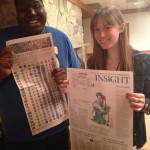 Chris and Allison–some of the awesome classmates I was lucky enough to spend the most time with! 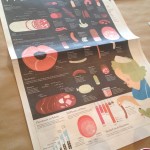 Die Zeit – Favorite Foreign Language paper. They just had a consistency with producing really great graphics. I couldn’t get enough of it. 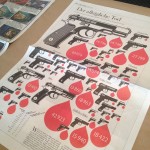 Trend – Guns!…Really? This one was from Die Zeit but there was a multitude of gun imagery in other publications. 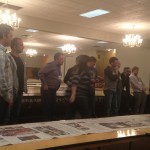 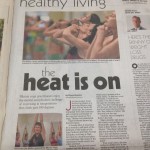 Bad Thinking — I just thought the layout was a little lazy and could have been composed with more thought and intention. It sort of just looks like they slapped it together. From The News Press. 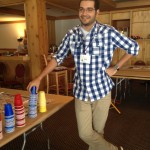 Traveled all the way from Germany! 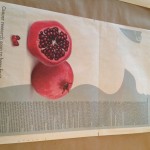 Innovative Thinking – I can’t remember the publication this was from but it was about how fruit, like pomegranates, can  help with breast health. Very creatively thought out.