So, the weekend with Society of News Design was bitter-sweet. Bitter because I basically missed every single assignment for all six of my courses that week, but it was super sweet because despite these meaningless grades, I got a chance to experience the fun/intense/design/professional side of the newspaper industry. I met people I never thought I’d meet, I’ve established deep friendships with my classmates I never thought I’d have (hi Ali, YooJung, and Julissa!), and I took home newspapers from all over the world! Can I just say that Tomaso Capuano(of The Wall Street Journal) and Greg Klee (of The Boston Globe) were my favorite people? They were hilarious, insightful, and intelligent people. I asked them if they knew each other because they seemed to act like each others’ best friends, and they said they just met this weekend. The perfect duo. I heard they sang a duet at SND Karaoke, too.

I was stationed at the Features section. I am personally very into the fashion industry, so naturally, my favorite part during the weekend was when they laid out the fashion section of the newspapers. The Gazette, of Canada, was my favorite. The way it features fashion on a spread is very simplistic, but fruitful with information that is digestible at the same time.

While the judges were judging, so was I. The newspapers that entered the competition with WIDOWS should never enter the competition. That is the number one rule in graphic design: no widows! There were several papers I thought were worthy of an Award of Excellence, but never made it. Which is OK, since I guess I don’t have that professional eye.  There were newspapers I knew would win a gold, like the Black Gold spread and the China’s Tiger spread (I’ve taken photos of these, see below).

What I learned: The newspaper industry is far from extinct. Although there are many newspapers folding (The Rocky Mountain News and the Seattle Post-Intelligencer), there is a whole society paying tribute to great newspapers all over the world. I came into SND not thinking much or less of the newspaper industry; in fact, newspapers and news design hardly interested me. I’m glad I decided to enroll into this course because SND taught me that there’s more to newspapers than just the content, just the journalist, just the physical paper. There’s a whole department dedicated to weaving both design and content together; and this will be the reason why the newspaper will not only survive, but thrive. That is to say, readers will increase so long as the design of a newspaper is attractive, modern, and innovative. There are some newspapers that stick to its traditional layout and traditional old-newspaper-feel (such as The New York Times), but if you can’t keep a loyal reader base, it’s time for a re-design and new readers. Design is absolutely nothing without content. I recalled reading foreign headlines and decks to judges throughout the process and many of them immediately put the chips in the “no” cup. That goes to show that in order for a newspaper to survive, not only do we need great journalists, but we also need great news designers.

My favorite parts of the weekend job: separating chips, cupping and uncupping, sweeping newspapers off the tables at 4 newspapers per a second, and falling asleep only to wake up with 15 people staring (and laughing) at me and David taking a photo of me. Of course, I enjoyed meeting professionals from all over the world, getting to know them and the work they do, and the free food. Also, my dreams consisted of Gayle’s (of the National Post) voice, “5-0 OUT, 2-3 Mark of Excellence, 1-4 Up for a Medal Discussion.”

Here are the photos I took during the weekend. I took over a hundred so it was hard for me to pick these out! 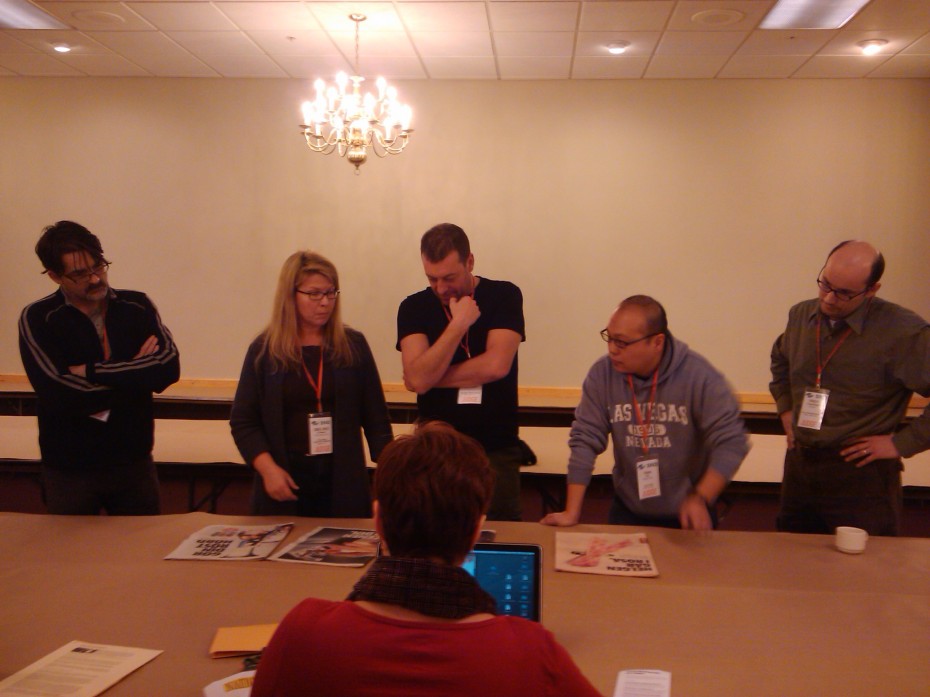 My Features judges (left to right): Greg, Dee Dee, Tomaso, Tian, and Troy. Look at how intense this “Up for a Medal Discussion” discussion is. 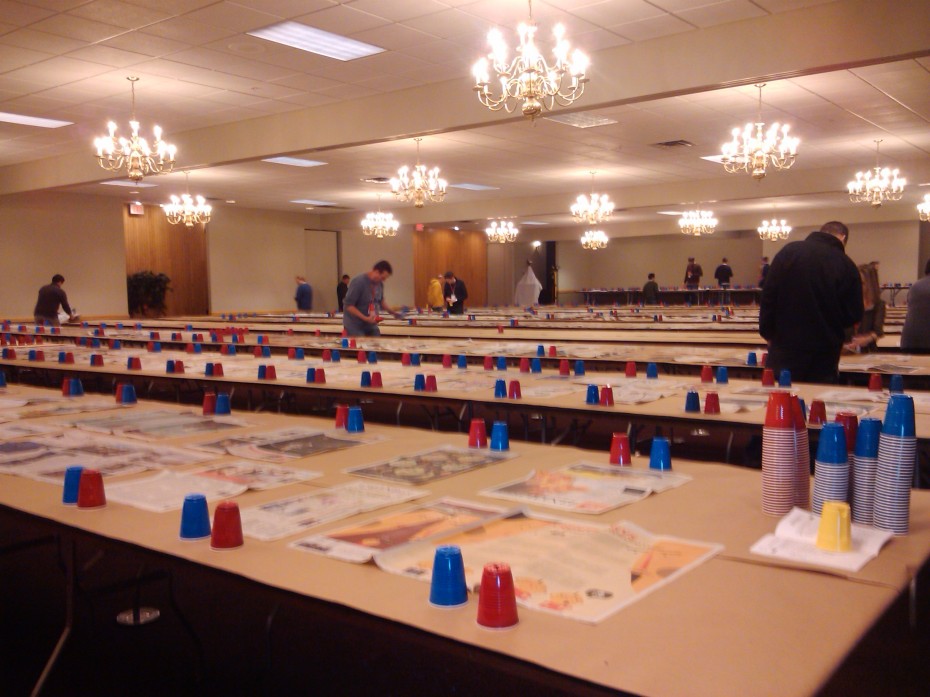 This was the Ballroom. It encompassed Features, Long Form, and News. Needless to say, the best area. Sorry Photo/Infographic 🙂 — although, I am a bit jealous I didn’t get to witness Photo and Infographic medal discussions. I MISS THIS SO MUCH! 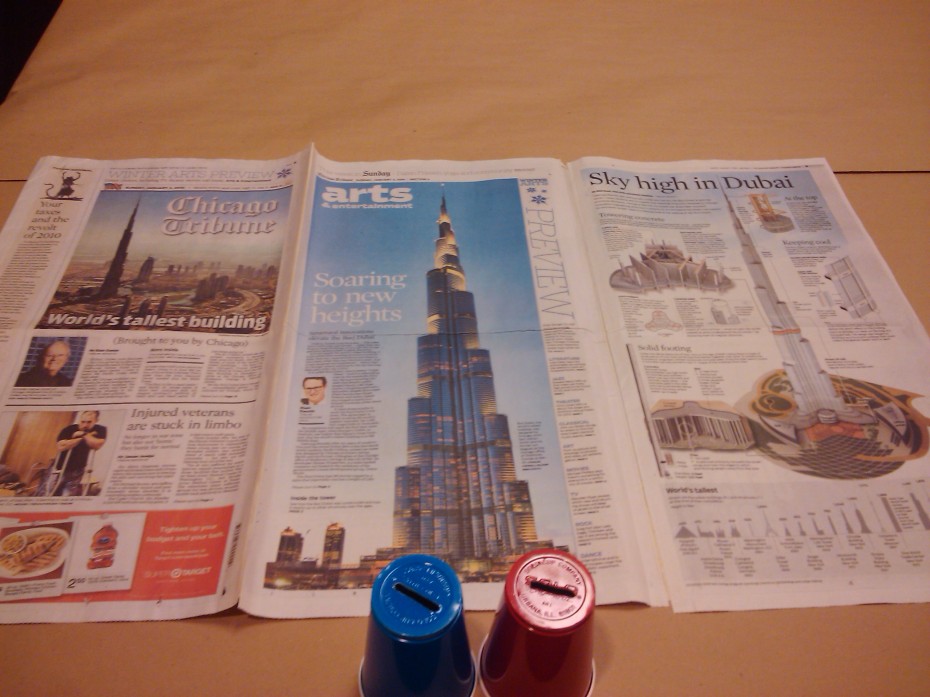 An amazing feature on World’s tallest buildings from the Chicago Tribune. Also, these damn cups with holes. 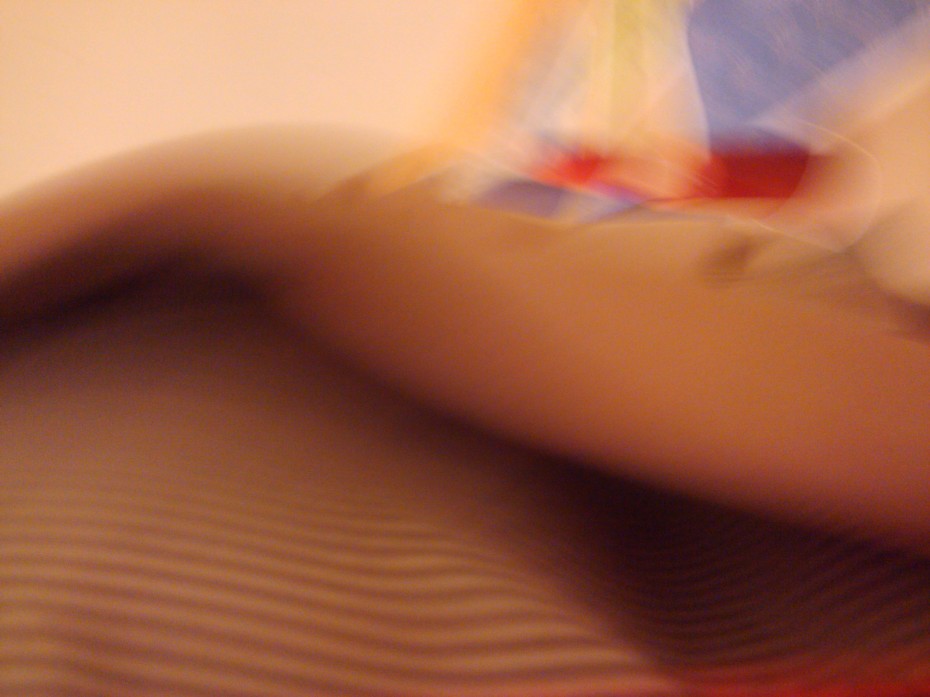 This is a picture of my mustard-colored sweater. I was in the middle of taking a picture of a great newspaper layout until one of the judges called me over to translate something. 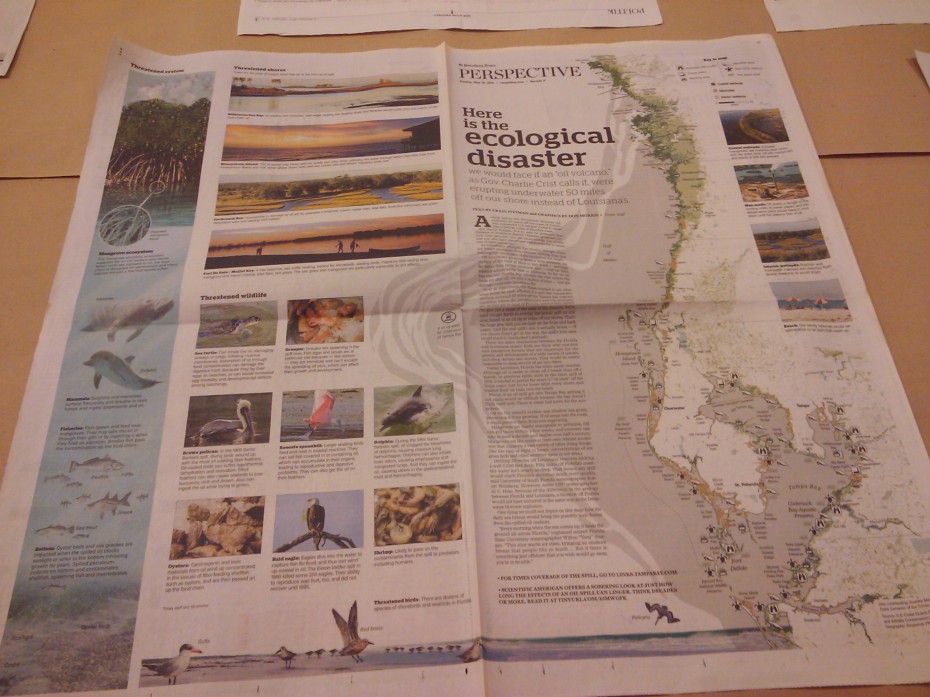 This was one of my all-time favorite layouts from the St. Petersburg Times. I think it was covering the oil spill catastrophe, or maybe just an ecological feature of a different nature disaster. 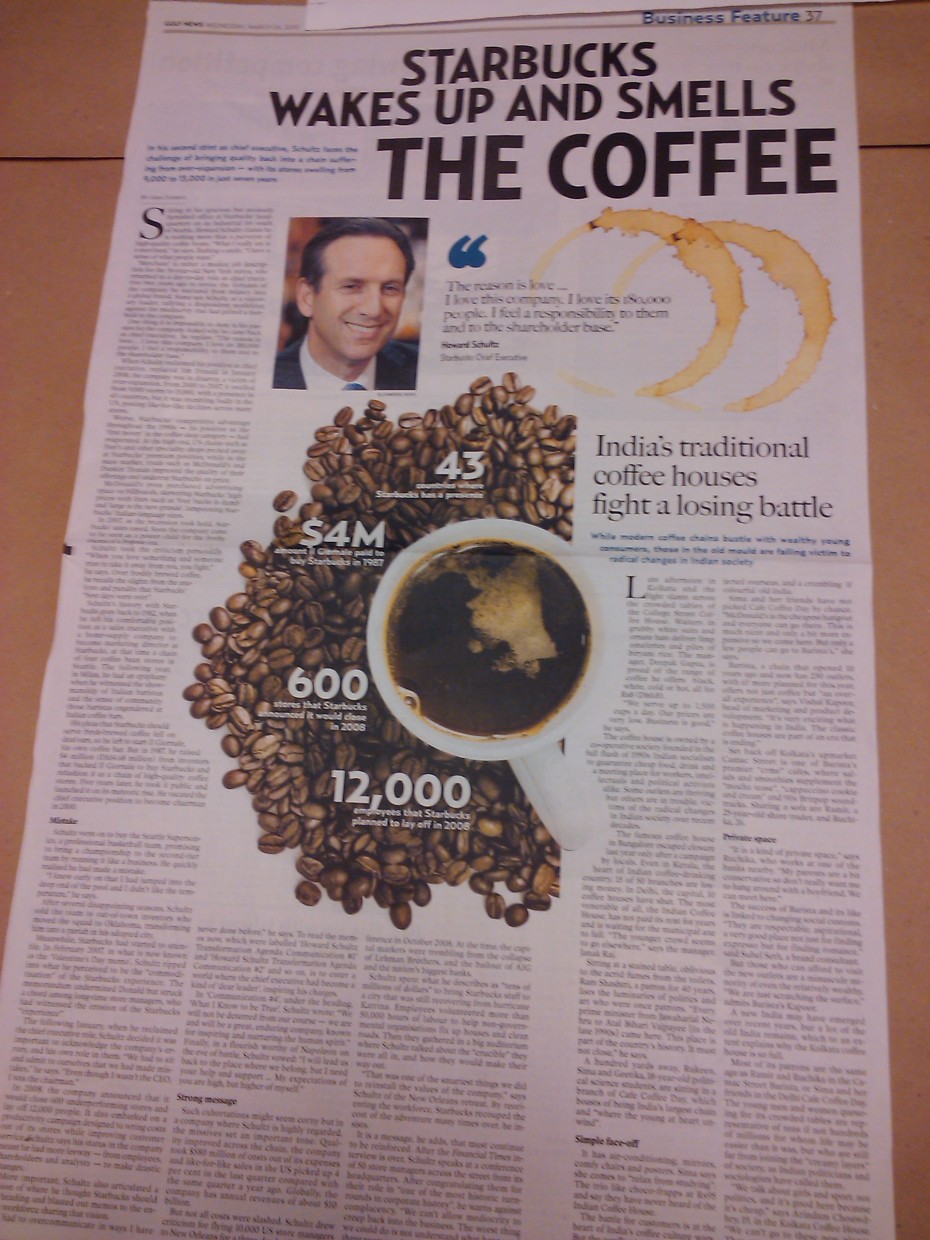 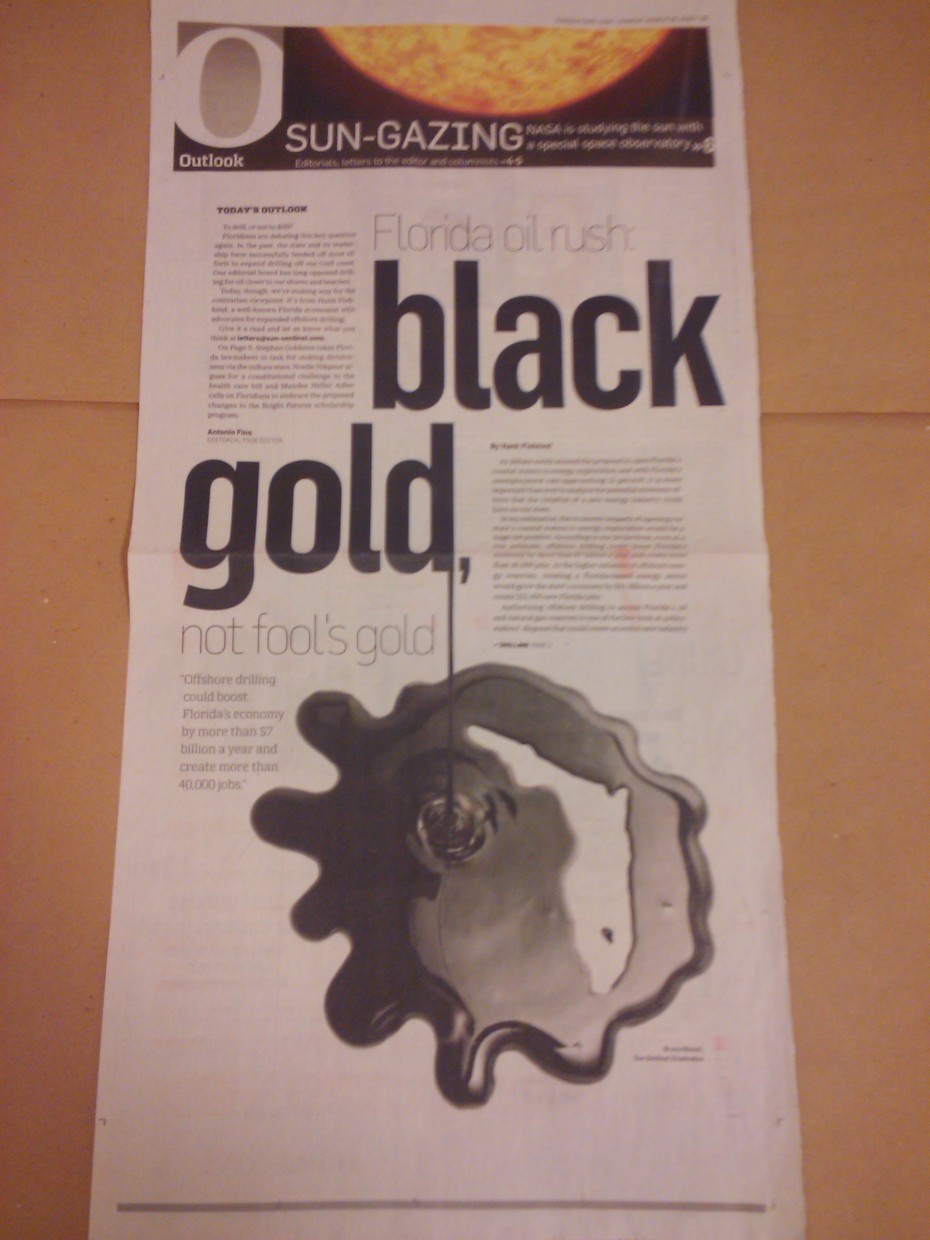 A Gold winner. I can’t read out which publication this is from. But I thought this was a clever way of manipulating and meshing text and photo/illustration. 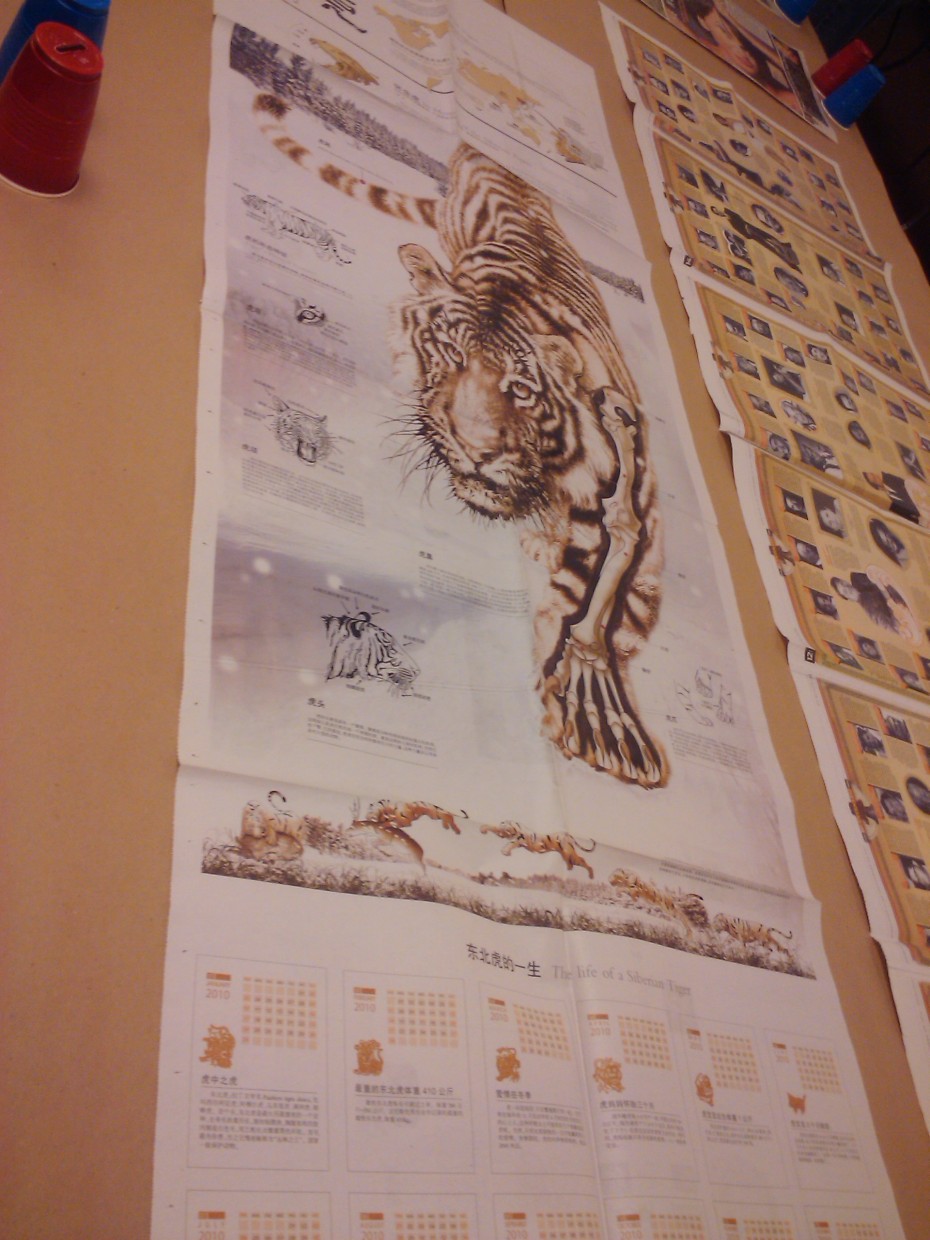 I can’t remember which publication this was from, either. But this depiction of China’s year of the Tiger was breathtaking and unforgettable. 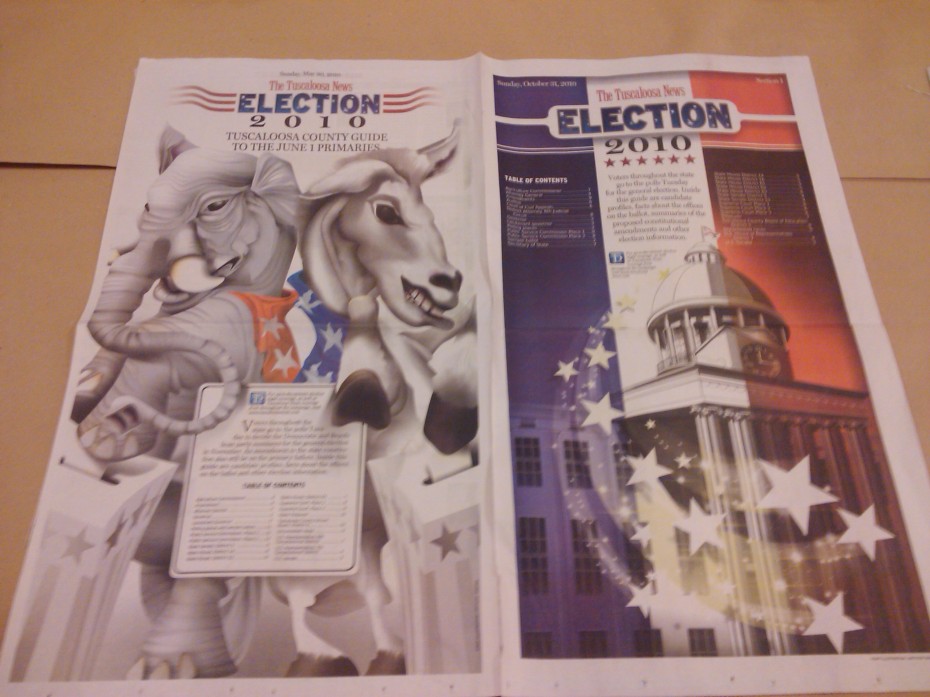 How amazing are the illustrations in this layout!? The subtle red and blue flags on the elephant and horse against one another was such a great move. And look at the blue, white, and red columns. Forget gutters and rules, they used colors of the U.S.A. to separate columns. 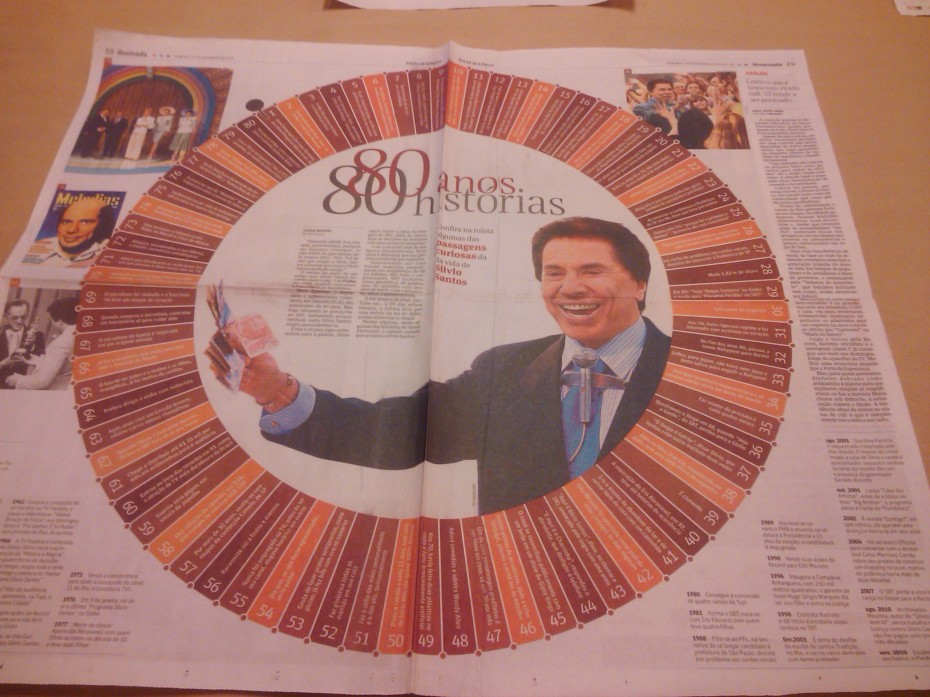 80 things in the history of this man?… I forgot the content. I loved this layout, but I remember a couple of things Tomaso mentioned that bothered him. To the left of the roulette, the images are hidden slightly, the texts around the roulette seem to clutter the whole layout and makes the eyes wander all over the play rather than focus on the nature of the roulette, and the “80” overlapping on another is too much. 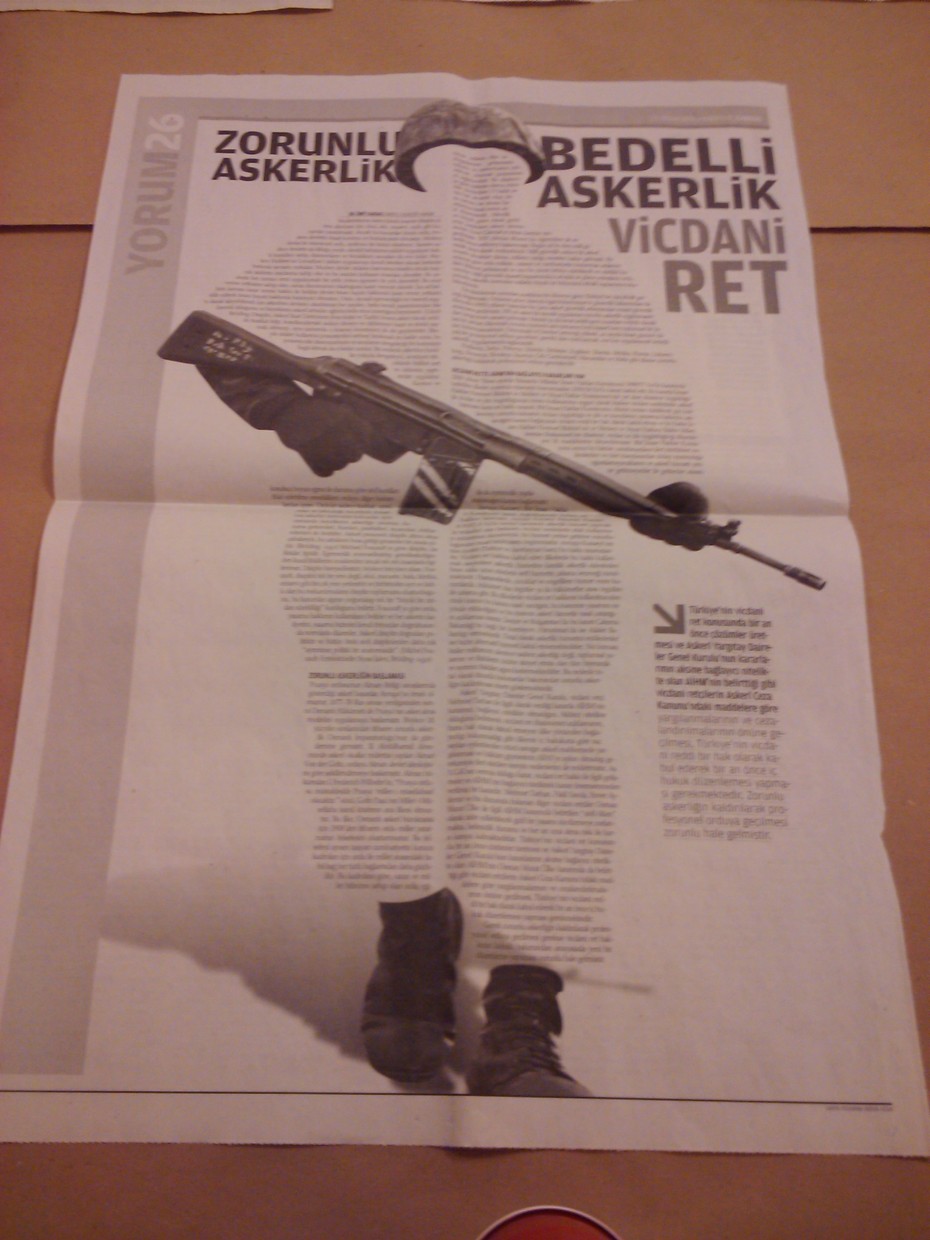 There was a Mr. Potato Head from Toy Story that was treated in this same element. 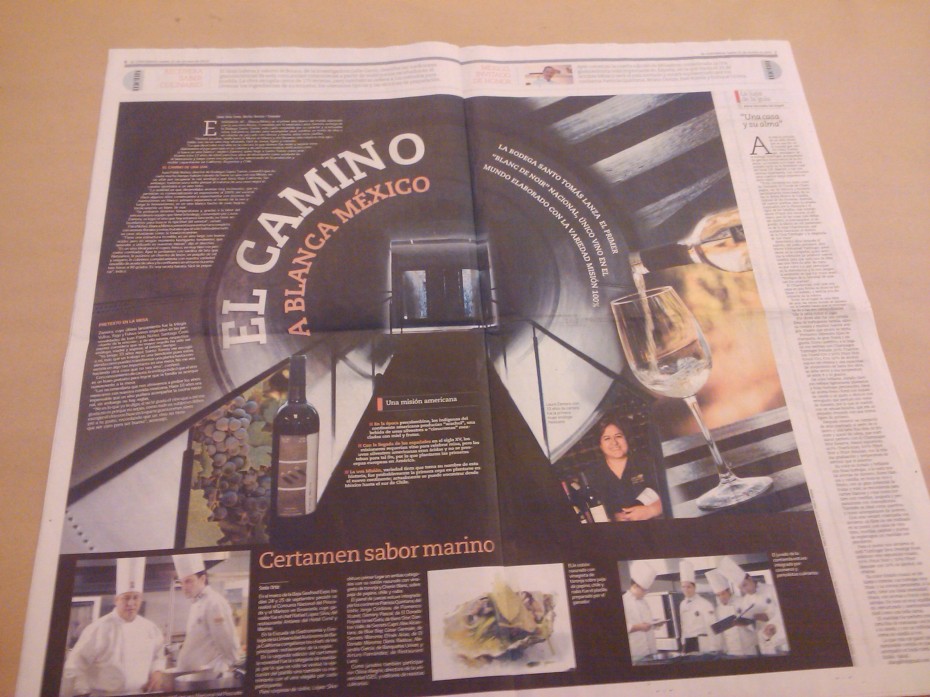 I thought this was such a clever and beautiful way to cover a wine cavern. The type works with the photo, not against it. And I really like the wine glass and bottles surround the image of this layout. The text wrap/skew is nicely done, and the reverse text technique can be tricky on newspapers, but I don’t mind it here. 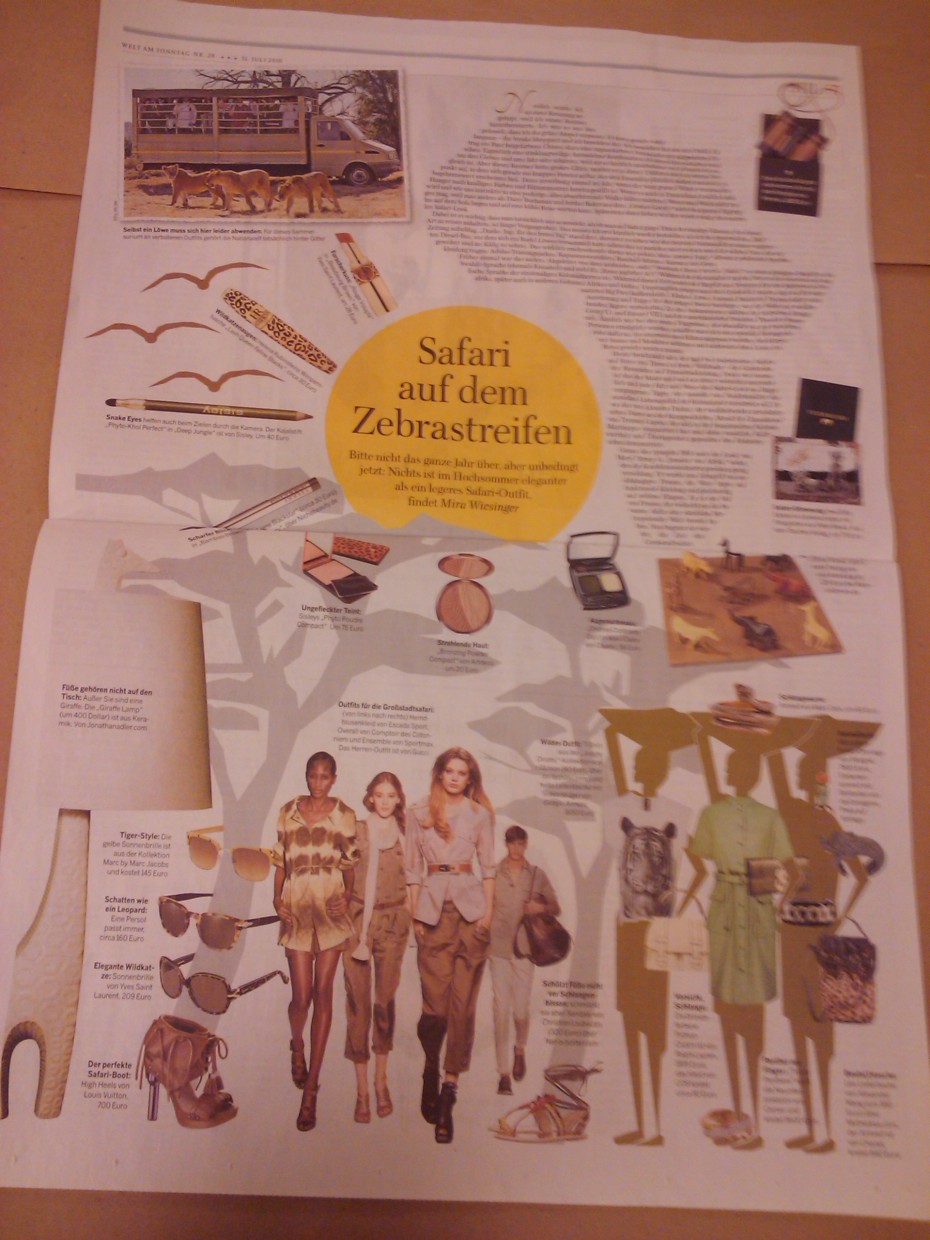 You all probably don’t care, but THIS IS THE BEST SAFARI-INSPIRED FASHION LAYOUT, EVERRRR. If I ever become the fashion editor of a magazine or newspaper, I’m going to have to take pointers from these guys. Just look at the way the text is shaped in the geographic Africa. The big yellow “sun” and these models walking toward us as if we were prey. This is GREAT. 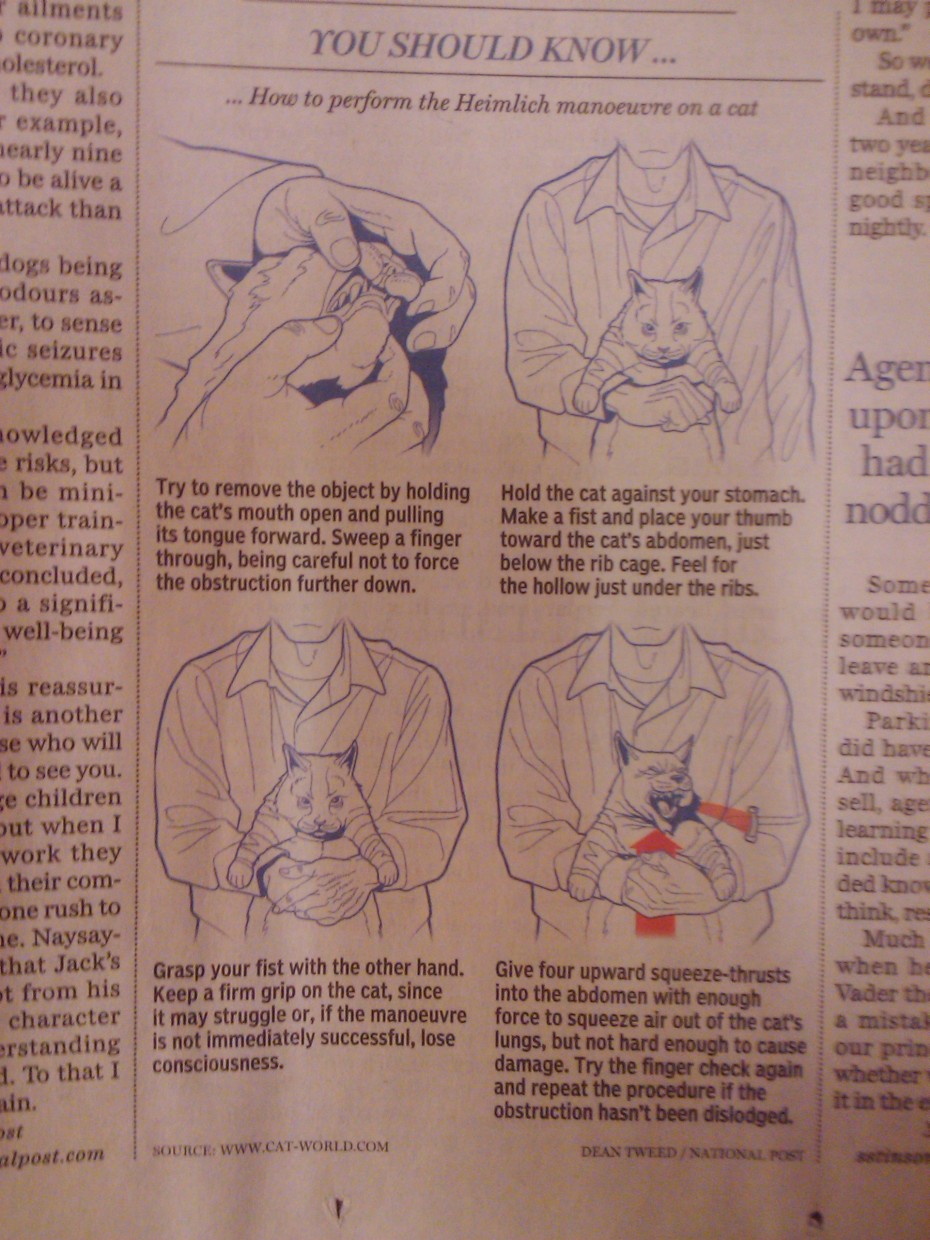 And of course, the National Post submitted this into the Miscellaneous category for Features. This is only a portion of the layout. But yes, I would love to learn how to perform the Heimlich on a cat. Thanks Gayle! This was too funny, Ali and I had a good laugh. 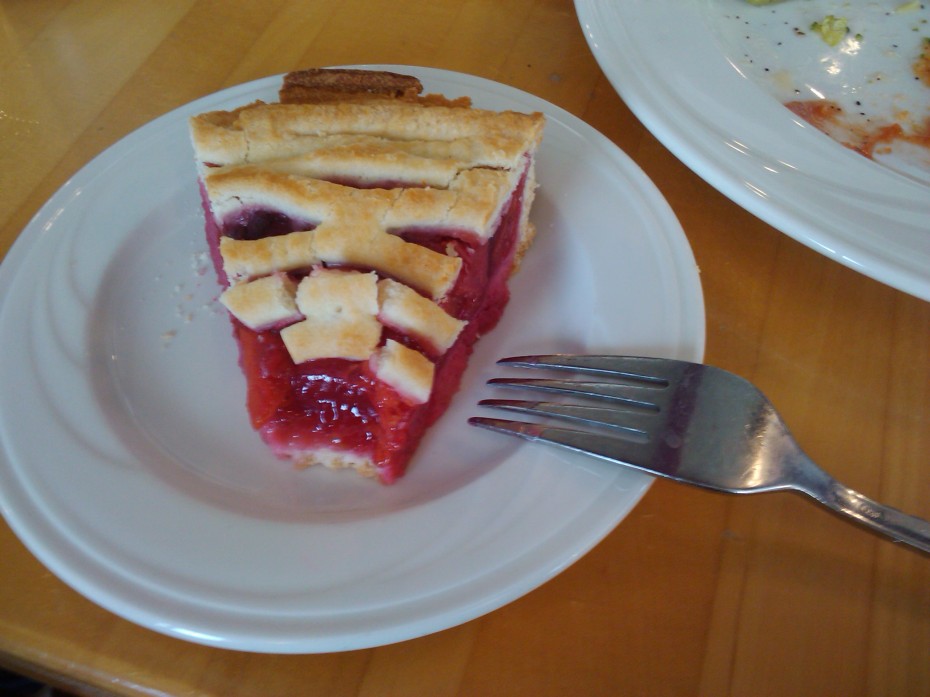 And to end it, here is my reward for SND weekend: cherry pie. YUM.

Thank you Professor Strong for inviting us! This was by far one of the most amazing opportunities and experiences I’ve had in Newhouse. The designers in newspaper industries really know how to have fun.