My first look at the enormous pile of huge yellow mailing envelopes sitting on the bar in the upstairs “visuals” judging area brought on a sudden realization for me of the size and scale of SND34. Regardless of whatever preliminary research I did before walking into Drumlins on Saturday, it quickly dawned on me that each envelope was overflowing with meticulously selected and prepared entries – surely the end results of countless hours of work, effort and dedication by journalists and designers alike – all waiting to be judged, analyzed and picked apart by a cadre of well-respected judges. Listening throughout the weekend to their deliberations, arguments and discussions of the submissions’ validity in the context of the history of news design made it very clear just how immensely talented these judges were, and just how sharp their eye was for detail.

I went into SND34 with certain notions and opinions on what made for a successful photo and illustration, but it seemed that with every uncupping, overheard medal discussion, and conversation with a judge regarding what they feel makes up “good design”, I feel that I came away from the weekend with a finer definition of what makes up an accomplished work of news design.

It was evident early on that no detail, no matter how small, went overlooked in any entry within any category. During a medal discussion for a spot news photograph from last year’s Aurora shooting, I was simultaneously amused and enthralled by how a schism in the judges’ overall opinion formed over an otherwise innocuous object in the upper-right hand side of the picture. Some judges felt cropping the background detail out would’ve enhanced the image, whereas others felt such an edit would serve no purpose, or, worse, be dishonest. It was a moment that perfectly highlighted the highly meticulous nature of the SND judging process.

Acting as a facilitator in the upstairs visuals room for the majority of the weekend, I was particularly excited to peruse the infographic entries. I have been creating a number of infographics over the past few months, so seeing such a large cross-section of work was incredibly helpful and very interesting. My initial favorites were the pieces that had a more visually ambitious, illustration-esque quality, so I was initially very shocked to see so many of those infographics receive the much-dreaded “0-5” during the competition. This irked me when I thought about it after leaving Drumlins on Saturday night, as it made me wonder if I was seeking out the wrong attributes when deciding on what makes a good infographic.

I then remembered a comment that visuals judge Michael Whitley stated, one that he echoed throughout the weekend: “at the end of the day, your design has to serve your reader.” To put it in another way, communicating the information and story at hand as cleanly and clearly as possible to the reader is should be the ultimate goal, and if a more severe aesthetic or distracting bells and whistles get in the way, it can hurt a story or visual’s core communication. I’m relieved that I internalized this rule sooner rather than later, because it allowed me to really look at the later infographics, as well as page designs, illustrations and other categories with a much more clear sense of what makes good design great.

The indisputable highlight of the weekend for me was watching and listening to the judges deliberate on whether the Washington Post’s comprehensive presidential campaign coverage or the Times of London’s groundbreaking Eureka magazine deserved SND34’s much-coveted Best In Show honor. The debate divided the entire panel of judges nearly in half, allowing for a truly spirited and knowledgeable discussion to commence. The dialogue that followed not only served to spotlight what made those particular examples of news design so exceptional, but also what makes newspaper and magazine mediums in general so important and effective in an industry that is rapidly moving in a digital direction.

Speaking with judge Rebekah Monson after the discussion, she emphasized how lucky we were to be privy to such a great dialogue about print journalism. She felt that the discussion perfectly encapsulated the pride that the judges feel for the work that they do and their fervent advocacy for what they believe to be the best journalism being created in their field. For me, hearing that from Monson was the perfect capper to SND34, effectively summing up the purpose of seeing countless pages of newspaper over a long weekend into a singular, all-encompassing statement.

The sheer number of entries, which we laid out side by side on those long tables throughout the weekend, quite possibly provided the most comprehensive snapshot of the current state of news design available anywhere in the world. I can’t think of any other opportunity I have had (or will have in the future) where I will get to see, touch and feel such a wide variety newspaper design from across the globe, all under one roof. I practically doubled the amount of photos in my phone shooting pictures of my favorite pieces, and made sure to point out a handful of trends on Twitter that I saw, snagging a few new Twitter followers in the process. I was also lucky enough to receive a copy of The Best Of News Design 33 book, which I have already begun to page through for further news design inspiration. Although having that book on hand will no doubt be very helpful to me in the future, no book will ever compare to the hands-on experience I received as a facilitator at SND34. 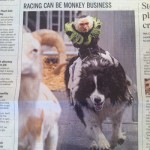 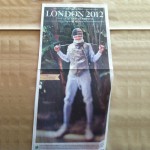 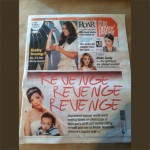 1. Humor: The monkey’s super-serious face of pure determination is what really does it for me in this picture.

2. Most Compelling Image: This portrait of an American fencer, with his somewhat aloof body language and American flag face, seemed like it contained a more subversive message than what’s just gleaned from the surface.

3. Bad Thinking: From font choices to the organization of the various elements, this page never seems to come together in any successful way. 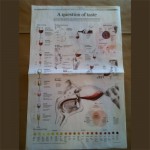 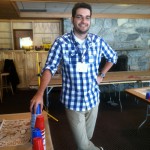 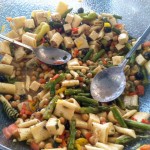 5. Judge who traveled more than 1000 miles to be here: Meet Saulo Santana, Art Director for the German tabloid Bild Am Sonntag

6. Favorite food: The carb-freak in me went for a third helping of this pasta salad on the first day. 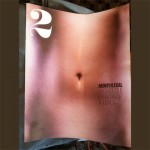 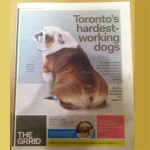 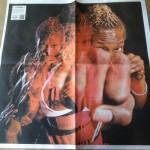 7.Best Magazine Cover: The sheer simplicity of this very effective cover design caught my eye from across the room.

8. Best A1 You Saw: This cover photo has so much personality, and also very accurately reflects the fun, almost frivolous voice of The Grid.

9. Photo Illustration: I love the kinetic energy in this piece. 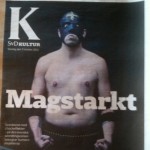 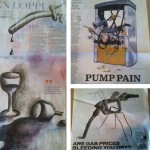 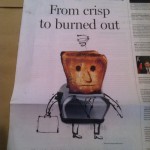 10. Favorite Foreign Language Page/Paper: This cover stopped me dead in my tracks when I was walking past it. I’d love to read a translation of this story.

11. A Trend I Noticed: Pictured here is the visual trend of gas pumps, which popped up in imagery pretty frequently in the illustration category.

12. Best Headline: The illustration makes this clever headline about being overworked that much more effective. 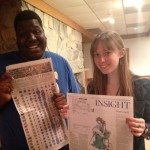 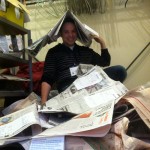 13. Classmates with whom you spent the most time: I feel like the four of us (sadly, Natalie isn’t pictured) spent a lot of time bonding over chip sorting.

14. Iconic SND Scene:  Initially, I was going to use a photo I took of the uncupping process, but this photo taken during the Best In Show discussion now defines my experience at SND.

15. Me Surrounded By Discarded Papers: Is any extra explanation necessary?!