I was unsure of what to expect from the SND judging and competition. Sure, I expected plenty of aesthetically-pleasing pages but, knowing little about the nuts and bolts of design, I entered last weekend prepared to be well out of my element.  Once the non-winning entries were cleared from the table and only the creme de la creme in news design remained, I was both floored by the quality of the remaining entries and impressed with how painstakingly thorough the judges were during medal discussions. All the entries that notched Award of Excellence recognition were near impeccable to my novice design eye and I would have been at a loss had I been tasked with choosing among a crop of such well-executed, thoughtful designs. One of the high points to during the weekend, for me, was listening to the long-form judges critique a 98 page entry spanning a year’s worth of election coverage — from the primaries to polling day — submitted by The Washington Post. After strenuous back and forth between judges, The Washington Post was eventually awarded the competition’s first gold medal as well as a judges special recognition award for visual storytelling. While a couple judges conceded that some smaller design elements could have been stronger, the overall entry claimed a gold because the design exemplified near-impeccable, innovative design that was reader-friendly. The latter point — readability — really struck me. The joint judge’s statement describing the winning entry stated, “It’s so common for something to be either just beautiful or just informative or just accessible. This is all three.” Multiple judges commented during the discussion that every page of the election coverage epic was meaningful and designed to inform without being too overbearing. For me, that was one of the biggest takeaways of the weekend — it’s not about how much information you can cram into a space, it’s about creating a design that is equal parts informative and visually pleasing without being overbearing. Because all five judges had to agree on awarding gold and only two other entries were able to claim that distinction during SND judging, I was really glad I was able to sit-in on the rarity of a gold medal conversation.

It was also fun listening to the judges debate a really, really, really good silver designs versus a gold-medal entry. Tim Ball,  who helped the long form team throughout the judging process, must have read the definition for what constituted a gold or silver medal entry at least two dozen times. One Los Angeles Times entry on the growing human population was one really, really, really good silver design that didn’t have quite enough to edge it into gold category. The judges discussed pretty much every element of the entry – from the graphics to photo sizing. An image of a ramshackle, outdoor health clinic in what appeared to be an impoverished country, was blown up especially big on a spread. The judges justified the image size, saying that it wasn’t overwhelming and coincided with the scope of the story. I didn’t realize that amount of thought and justification went into something that seems, at least to a reader, almost seamless.

On a different note, it was really refreshing to be reminded of how close-knit a network designers and journalists can be. It was nice to see all these different journalists hailing from different outlets converge on Syracuse for a mini-reunion and spend three exhausting days joking, catching up and immersing themselves in a shared joy. 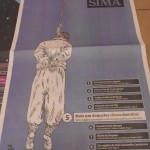 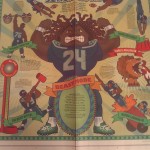 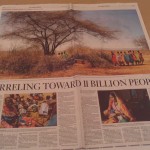 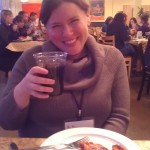 judge who traveled more than 1000 miles: All the way from San Diego! 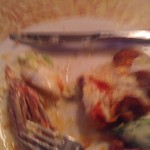 favorite thing you ate: my ravished (and blurry) plate of wings & pizza 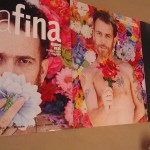 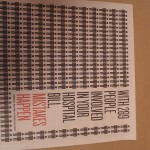 trend: I saw a few newspapers using images of people to denote a large quantity of people 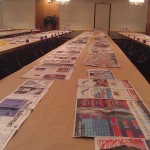 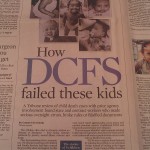 favorite headline: straight and to the point 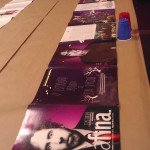 favorite foreign language page/paper: Overall, I was impressed with the look and feel of Serafina’s pages.