This past weekend at the SND competition was above and beyond my expectations. Although it was very exhausting, it was definitely worth it! Looking back, I am really honored that I had the opportunity to spend time with top professionals in the news design field and to see various newspapers from all over the world.

I was in the photography/information graphics room. The statement “a picture is worth a thousand words” sums up what I thought about during the photography session. Some of the photos were so powerful and moving that I couldn’t just pass by. Although they were still images, they seemed to be alive and communicating to me. It was also interesting how it did not require much explanation for me to understand what was going on in the photos – language was not a barrier.

There were so many things that I really enjoyed about the SND competition, but my favorite part of the competition was the medal discussion. I was amazed by the judges’ remarks. They made insightful comments that I would have never thought of. Moreover, during these discussions, I was reminded several times that design is subjective. Although one person may look at a design and think that it is phenomenal, another person may completely disagree. There were definitely times when I thought the publication should have won at least an Award of Excellence that didn’t and vice versa.

In addition, getting to know the judges was a lot of fun. At first, I didn’t know how to approach them. Frankly speaking, I was a bit intimidated after listening to the first medal discussion; they were so charismatic. However, as time passed by, I got to know the judges a lot better and realized that they are easy to talk to. It was also encouraging because it seemed as though they wanted to get to know the students.

I also learned through talking to one of the judges that the newspaper industry is going through struggle, while the magazine industry is in better shape. This helps explain why newspapers are attempting to re-design to look more like magazines. But I think as long as the professionals in the field continuously push the limits and come up with innovative ideas (just like the ones I’ve seen at SND), the future of newspapers looks bright.

Overall, I think I learned so much just by being exposed to lots of newspaper design examples within a short period of time. Hopefully this experience will help me when I design my Cazenovia prototype!

Here are some examples that really caught my attention. (I think I’m in love with European newspapers!) 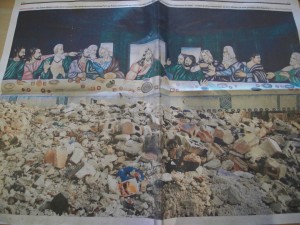 I think this is a striking image – the juxtaposition of “The Last Supper” and the ruins. 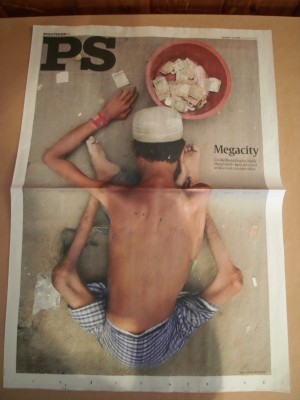 This powerful image speaks for itself; no explanation is needed. 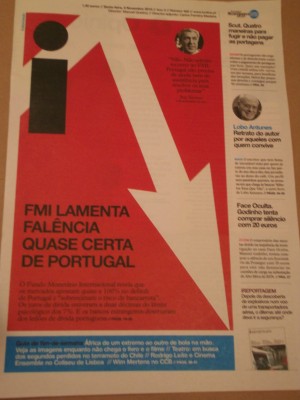 I just love the simplicity and the great use of colors on the page. 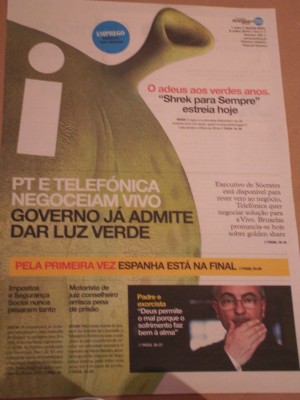 I thought this was a very cute layout with a creative way of portraying Shrek. It also has a lot of white space. 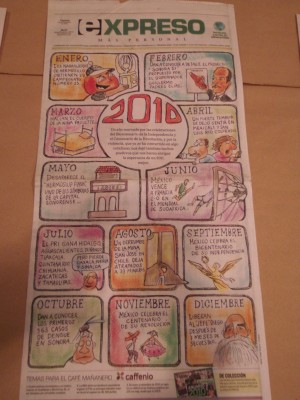 I’m not a huge fan of cartoons, but I thought this was an innovative illustration of the year 2010 on the front page.