Exploring the color palette used by ESPN The Magazine is a chore when just perusing one issue, let alone multiple ones. Over the past six months or so, ESPN has started to dedicate every issue to a certain sport or theme. This makes the feature stories and articles – especially in the second half of the magazine – differ greatly from issue to issue. Headlines, and cutlines seem to vary to match the story, though the black body copy pretty much stays consistent throughout. 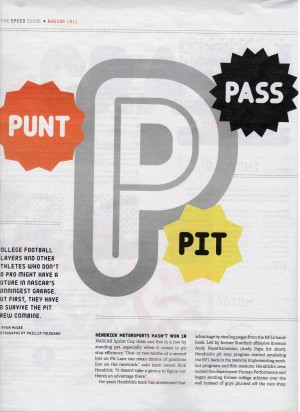 Studying the magazine closely though, this is what I’ve found so far. For its cover, as well as the featured articles inside, ESPN has been using a retro color scheme. I knew they were using something different, but I didn’t know what it was called until I actually asked my wife who is an artist. I feel like this color palette really suits them well, because it is something different than you see in most magazines these days and it makes ESPN stand out.

ESPN The Magazine, despite the variations in each issue, does have some continuous features and departments throughout. At the front of each magazine are a variety of special departments that are consistent from issue to issue. These departments are delineated by a one or two word title that have a consistent color scheme that does not change from issue to issue. I feel like this adds some familiarity for the reader and helps progress them to the feature stories later in the magazine. 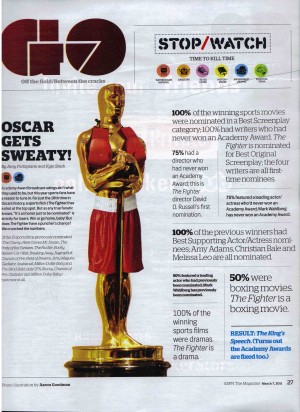 Overall, I think what ESPN The Magazine is doing right now is really working well. Though the feature articles change, along with the color palette used for them from issue to issue, the overall feel of the magazine and especially the first half of the magazine remain consistent. Also, even though the color palette changes as far as the feature area is concerned, they still work with the same type of colors, so the entire magazine ties together. When I open an ESPN The Magazine, I know right what I’m looking for at the front of the magazine. Then, as I work my way through, I’m led to the main stories and content of the issue. 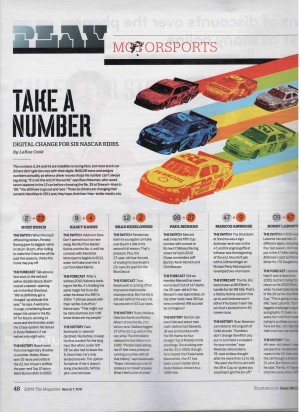