The format of The Washington Post doesn’t stray far from the norm: It’s size is a typical broadsheet, which has long vertical pages and tends to be the largest size of today’s newspapers. Specifically, it’s dimensions are 12’’ by 21’’ according to the newspaper’s advertising webpage. And it incorporates a modular layout with varying shapes of rectangles encompassing the text. Because it has a traditional format, the newspaper runs about 4-6 top new stories on the cover. Though the dimensions aren’t unusual, I think the staff at The Washington Post is making an effort to design the paper in a clean way that appeals to readers. I still think the front page tends to cram a lot of information in that doesn’t necessarily cater to readers, but this particular example shows what in my opinion is a neat design that sends a clean message and lets the content speak for itself. 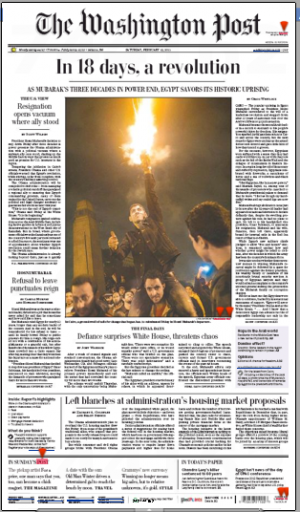 As for the grid format used, it uses a 6 column base and the front page runs content on 5-6 columns usually. I personally feel as if they front page looks best one the five column grid because 6 columns of text make the page look extremely busy. It is helpful, however, when a very large image and a large headline is placed on the page to break up the text.

The Washington Post’s front page functions much like other newspapers: This page is dedicated to the top stories of the day and it also includes teasers, which promote other great stories within the paper. I think overall the main intention of this front page is to draw readers in; however, I think there are design tweaks that could be made to do this more effectively. (For instance, I think adding some more color and white space would be helpful). Other design elements that comprise the page and make The Washington Post unique is it’s nameplate, which stretches across the width of the front page. Usually the front page also incorporates one dominant image. By using these consistent design systems, the newspaper allows readers to know what to expect. This is good because it gives the newspaper and identity; however, it can be a downfall if the newspaper begins using it as an excuse not to innovate.

In my opinion, here’s an example of how using two dominant images creates tension and static on the page. 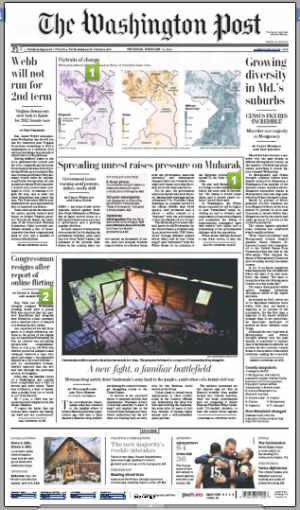 By squeezing in so much information on the front page, this newspaper organizes its content by using information hierarchy. The top stories lie at the top of the page, while the supporting stories and other news lie alongside or beneath it. At the bottom of the page lie promos of stories within the paper. As for specific elements, I’ve noticed the paper varies the design regarding where the headline is placed; sometimes it’s placed on top of the dominant image, other times below, and occasionally alongside it.

With all of these design techniques and decisions, The Washington Post sends an implicit authoritative tone with in-depth coverage. (In fact, in the past few weeks, nearly all of the front page headlines referenced the revolution in Egypt.) This shows that the paper is dedicated to its readers. But I also think the front page feels average; it’s typical design doesn’t seem to appeal to or welcome new readers.

Lastly, the images on the front page function to highlight the story using action packed images or significant people. But I don’t always think the dominant image is best designed on the page because it can be so crammed by other information that I find it distracting. 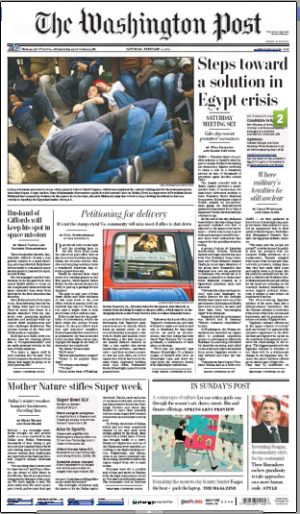