Here’s 10 definitions of terms and examples seen inside The Kansas City Star:

Refer in The Kansas City Star

Refer: A refer is a line or paragraph that refers to a related story somewhere else in the paper. It’s different from a tease in that it’s usually inserted with a story on the front page of a section, and it’s also almost always given some graphic treatment. It’s a play off the word, since it’s making reference to a future story.

It was actually sort of hard to find refers in some of the KC Star issues of the past week. A lot of times, theyload the front page with teases, but don’t have refers to related stories. When I did find one — see the photo of one from the sports front page in Saturday’s paper — I thought it worked to put the refer together with a schedule of the local college basketball games. It tells the reader where to go for more information but also provides the reader with the essential info: the date, time, location, channel. It also works to tease to the online website. 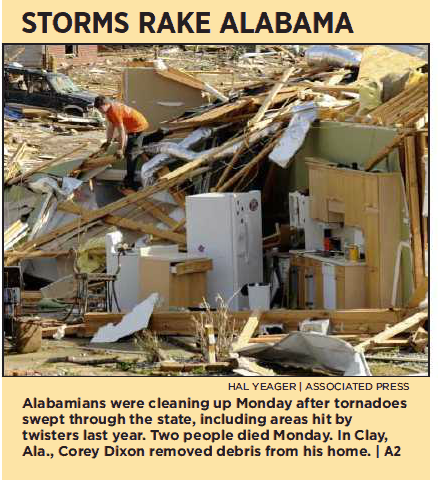 Tease on the front page of The Kansas City Star

Teaser: A teaser is similar to a refer in that it leads you to an article, but teasers (or promos) are displayed on the front page to preview the big stories coming in each section.

There is a concerted effort to place as many photos as the KC Star can with its teasers. Some days it is only one, some days it’s five. Most of them are “skyboxes,” displayed on the top of the front page. But I thought the most effective ones were the teases placed in the middle of the front page, acting as barriers in between unrelated stories. Those teasers provide the opportunity to run photos that are slightly larger than the ones at the top of the page (See Tuesday’s tease for “Storms rake Alabama.”)

Pull quote: A pull quote is an enlarged and graphically treated quotation that is “pulled” out of a story to break up a text-heavy page and to add effect to that specific quote. It’s usually much different than how the body copy looks and could add color to a page as well.

The Kansas City Star doesn’t seem to utilize pull quotes too often. There wasn’t any pull quotes in their Saturday and Sunday papers this week.

Nameplate: A nameplate is the way the name of the newspaper is displayed on the A1, also known as a flag.

The Kansas City Star’s nameplate is OK. Does it work? I think the other elements of the front page work more toward making the page pleasing than the nameplate does. It’s kind of just there. The blue background with white text, in all caps, is a distinct separation from the rest of the page with a white background. While it splashes color on the page, it seems to be overshadowed by the other points of entry on the page — the photos, headlines and teases. 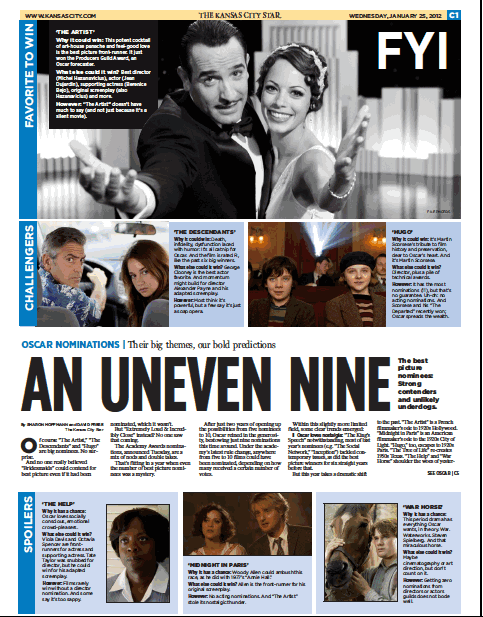 The section flag for FYI becomes part of the content on this day.

Section Flag: Essentially the nameplate for each section.

The Kansas City Star seems to do a real nice job of incorporating images into its flags. There’s always images with the front-page teases, and the section-front teases allow for some creative leeway with the section fronts. The font is a sans serif but isn’t generic, it has some sort of fresh feel to it that I don’t get from the nameplate. Sometimes, the flag because part of the story, like with Wednesday’s FYI (features) section (see photo). Other times, a photo will become ingrained in the flag (see Tuesday’s sports section).

Byline and credit line: The reporter’s name and title, usually at the beginning of the story.

The KC Star aligns its bylines to the right of the story. There isn’t much differentiation between bylines throughout the paper, they are all the same typeface, slightly bolder than the writer’s title, and aligned right. There’s usually a phone number and email address for the writer at the end of the story.

This front-page story is boxed in by the sky background.

The Kansas City Star uses boxes to the point that they lose their effect some. The paper tends to use a beige-colored box on the front page often, separating off a particular story. That color is visible again on the inside and on other section fronts, and seems to be the color of choice to prioritize a lot of stories. But there isn’t much rhyme or reason to the choice of stories that is made beige/yellow, so I wonder why it is used so often.

The paper does make boxes work when it comes to graphic illustrations. Twice in the past week, the paper has had alternative art for its front page, and signals it with a colorful box, even using a reverse on one of the headlines.

Cutline: A line or block providing descriptive information about a photo.

The Kansas City Star is consistent in its cutline typeface, a sans serif type that is clearly different from the body copy. The paper seems to run a lot of feature photos — both on the section fronts and inside — and uses boxes to include a cutline and a mini-mac headline with the feature photos that don’t connect to a story. Blue and a beige/yellow seem to be the primary colors the paper uses, and they are used to connect cutlines as well (notice how in this feature photo/extended cutline below, the color of the box around the cutline is the color of the text in the mini-headline). 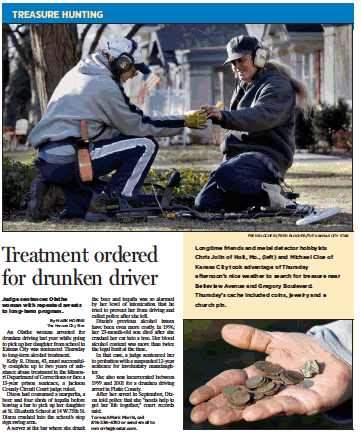 Two feature photos, with a cutline.

Folios: Type at the top of an inside page giving the newspaper’s name, date and page number

The folio for a page in The Kansas City Star's sports section.

The paper continues its consistency of using two primary colors in its folios. The strip across the top remains a yellow/beige, with a blue square in the corner of the page, indicating the page number in white text. For black and white pages, obviously this doesn’t show. “The Kansas City Star” typeface from the nameplate seems to be used again here, in the center of the folio; the date, page number and website are also included. One thing I think works here is that when the page is part of a section, or even if the page holds all of the same subject matter, the section’s name is also included in the folio (see The NBA | The Kansas City Star).

Reverses: A printing technique that creates white type on a dark background.

Reverses, in order to work, need to be saved for important stories, in my opinion. The Kansas City Star utilizes boxes to make stories unique on a page, but they seem to save reverses and use them sparingly, which works. Reverses with colorful art can make a page really pop. Take the paper’s Sunday Arts and Entertainment front, which features a story about the Norman Museum of Contemporary Art. There are five colorful photos on the page, and placing them on a dark background really gives them some shine. The white drop cap also has greater effect. The page is completed by the stories not part of the dark background, as the colors of the arts and entertainment section flag are used to provide headers on those stories. 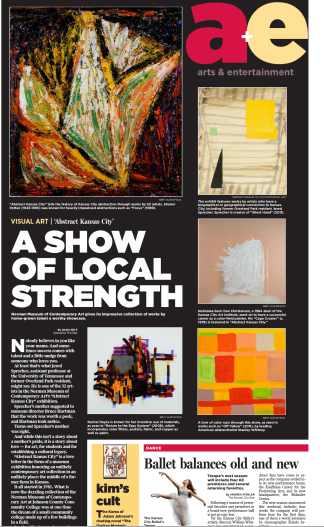 The cover of Sunday's Arts and Entertainment section uses a reverse to make the photos pop.