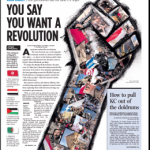 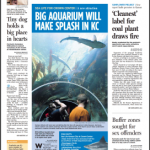 Though it’s one of the older broadsheets in the country, The KC Star has taken steps with its front page to bend the traditional methods used in designing most newspaper covers. Here’s a look at how the paper uses its front page to convey its modern style.

The Kansas City Star is a broadsheet, with different sections for news, sports, arts and culture and other revolving sections. It is published on a 48-inch web, and averages 76 pages (150 on Sunday), according to The McClatchy Company’s website.

The newspaper generally does not stick to a specific daily grid on its covers, usually using 6 columns. In fact, it often uses different widths on its columns on a day-to-day basis. It uses sidebar-like boxes that are colored differently to separate some stories as well.

The newspaper generally sticks to a modular format, but it does make some exceptions. On a few front covers it wrapped text around graphics and photographs, changing from other days when rectangular articles and pictures dominated the front page. These choices help highlight Sunday feature articles or divert attention to graphics that enhance stories.

The page is supposed to highlight what’s big in Kansas City news by providing large, bright pictures and different colored backdrops to features and news stories. Its large teasers, attached to the flag, instantly provide the reader with important stories and events they can read about in the paper. The KC Star allows its front page to flexible as well. For Sunday features and big news stories, such as the snowstorm last week, they’ll break from traditional modular format to convey the uniqueness of the article.

The front page runs large teasers connected to its flag, with multicolored fonts and large pictures. The KC Star uses many refers, sidebars, and graphs as well. A drop cap is used to highlight important stories or feature articles. Bold font is used to give some words a louder feel, specifically in its deckheads and major headlines.

The most consistent organization in the KC Star lies in its teasers, which usually point to local news or sports stories in the paper. The newspaper is not afraid to use large images, however, to change up routine and give the cover a more magazine-like feel. This Sunday a large graphic took up most of the page for an analysis on Americans’ view of the Egyptian revolution. The numerous refers and sidebars are located within or near bodies of articles.

As I mentioned before, the teasers are treated very importantly here. The paper also seems to value its deckheads, which are bolded and usually 4 – 5 lines long. Photography has a large role as well. Large photographs, or graphics, are common, and some even partially cover the flag.

The KC Star emits a modern feel with its white space, creative grid format and unique flag. The page is usually extremely colorful, with both articles and the flag/teasers filled with different shaded backgrounds, reverse type and large pictures. It makes the page jump out at you, and gives the newspaper a much warmer and contemporary feel compared to other broadsheets.

By using inconsistent grids, large pictures, a colorful flag and bold graphics, The KC Star clearly wants to break the traditional mold of broadsheets. By staying inconsistent, the paper gets the feel of a website, as it changes drastically on a daily basis. It still implements many widely used grid formats other broadsheets use as well, which lets the paper maintain a partial traditional news and dignified feel.

Photos and visuals play a large role here. The paper is not afraid to print pictures across the entirety of the front page with text wrapped around them. As mentioned before, photos routinely block part of the flag as they extend from teaser skyboxes. Large, colorful graphs and graphics are used as well for major stories.

Bright colors, large photographs and the consistent unique methods taken in with the flag/skybox maintain the modern feel The KC Star is going for. The use of white space gives every A1 story some breathing room, which also allows the paper leeway with using bold text.