The New York Times is not necessarily known for their use of color, in fact most of the publication is black and white or on a variation of the gray scale, so the use of color is limited to either promo section heads or the photographs themselves. In my last post I spoke about how The New York Times is a grandfather and a precedent in how news design and publications have been created. They set the standard of what headlines originally were used for and how they should read. How bylines should be on a page. How photo credits should appear. How pull quotes should be placed. Arguably there are some new publications, perhaps not entirely news heavy like TNT (i.e. Mother Jones) that can have creativity as far as color because their publication is more dependent on it. However, The New York Times is a publication that is there to tell the news, so you have to wonder how much color the public actually wants and if the content is reliant on it to get the point across. 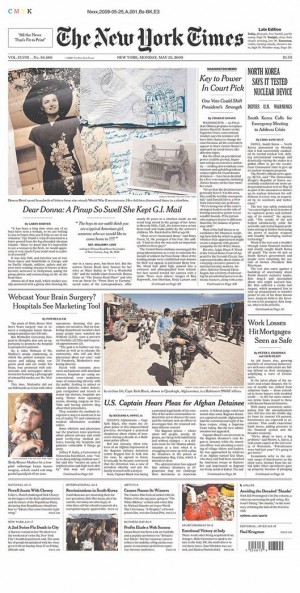 You can see that the use of color on this front page is strictly limited to that of the photographs–though TNT has really maximized the uniqueness of each photograph to give a variation of color so that you don’t feel bored or contained. It gives a sense of freedom and perhaps fun that the monotony of black and white can leave the reader with. The point of it is while TNT may be synonymous with black and white, they don’t want to strictly rely on it because readers need a bit of variation during their experience. This is accomplished through photos. 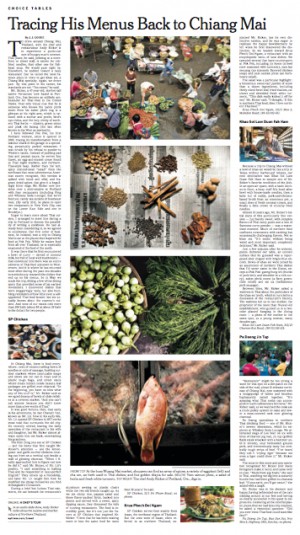 This Travel piece you can see is more drawn by the color in the photographs than the story itself. The New York Times is aware that color will draw a reader into a piece. The green, pink and other colors ignite curiosity so that you actually go in to read the story. Whereas if this were all black and white you might be tempted not to because of the lack of color stimulation. 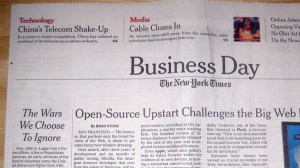 In this example you can see pretty much the only other time The New York Times will use color, aside from photographs, is in their promo section heads. Both “Technology” and “Media” are used in red to draw the reader into the rest of the black and white text. It’s an interesting mechanism because again, you don’t want to be entirely reliant on one color scale or else you’ll lose the reader.

The New York Times may predominantly work on black and white, but they know how to maximize the use of color they restrict themselves to and how to stimulate the reader to go even further into the publication, even though it may not be inundated with creative use of color–which could be a good thing.