The New Yorker is a magazine that encourages the readers to think, specifically about social issues and the world around them. As a mostly word-driven magazine with the visuals being mainly illustrations, it seems book-ish.

As for the front cover, the purpose of it is to give a sneak peek of what’s to come inside in terms of content and overarching themes. However, at times the front cover’s illustration is also it’s own story, something that will resonate with the readers. For example, the Martin Luther King Jr. edition of the New Yorker featured stories about social justice and the cover was a timely illustration depicting children painting a mural of MLK. As stated in my previous blog post, it could represent the larger issue of carrying on an important legacy or message throughout generations.

For the Oct. 7 issue, the New Yorker used an illustration of Donald Trump pushing Uncle Sam, a symbol of America’s freedom and loyalty. This was timely because it was a caricature of the impending impeachment accusations and spoke to the larger American audience as Trump threatened many foundational principles. 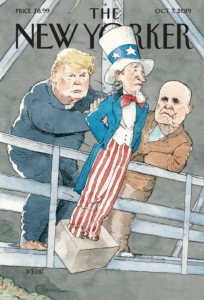 In the New Yorker, they mostly use illustrations, and it’s a great technique for the magazine because it keeps with their book-ish nature, as a word-heavy publication. They typically are at the beginnings of big feature stories, or are used to break up poems or shorter narratives that share a page, much like a graphic. 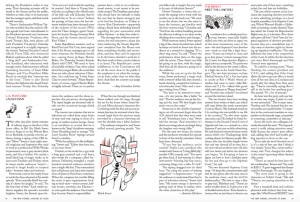 The nameplate on the front of the cover, as well as the date and cost of the magazine, are in the same, classic, New York font, similar to that of an older publication. It’s regal and elegant and fits well with the illustrations, but is a stark contrast with the modern digital age. The words are all at the top of the page, which serves the reader so they can see the cover illustration more.

There aren’t any cover lines on the front cover, and that’s probably because they don’t want to cover up the illustration. Instead, the readers must turn to the front of book to see the table of contents, where the stories are listed. They are divided into various sections: “The Talk of the Town,” “Personal History,” “Shouts and Murmurs,” “Reporter at Large,” “Fiction,” “The Critics” and “Poems.” The list is structured in a way that puts current events first at the forefront as most important, then profiles and long form stories as secondary, and the rest of the stories are shorter, like poems and opinions pieces.

All of these aspects of the New Yorker are consistent throughout every issue and in each individual issue as well, so the readers know what to expect with every new issue that comes out.