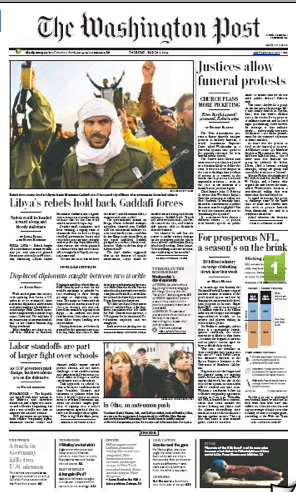 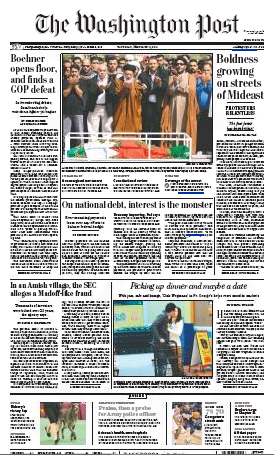 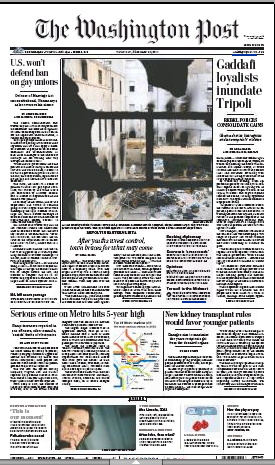 The Washington Post tends to maintain a muted tone on its front page even though it incorporates splashes of bright colors. I think the intention here is to continue the authoritative identity of the paper, but still attempting to modernize and appeal to a younger audience. Ultimately, the front page stands out as black and white because the text is black and this page is still heavily devoted to written content. Though the above examples don’t show it, I believe the newstand issues of the WP include teasers at the top of the page. And these images and use of text include different colors as well. This furthers the idea that the WP is interested in slowly using more bright colors to grab the eye.

Since clearly the A1 is such an important part of the paper’s identity, I understand why they choose to keep the paper from feeling too young and flashy. But as you flip through the paper, the special sections throughout the week are the parts of the paper that experiment more with a brighter color scheme. Here’s a few nicely designed examples: 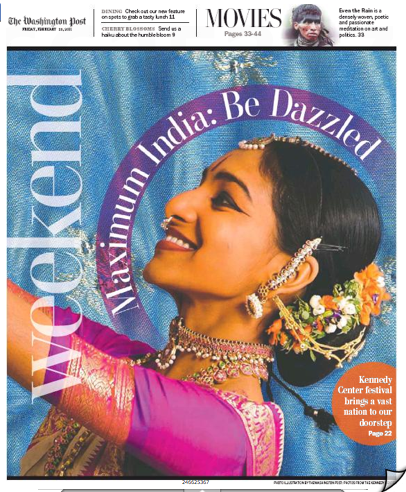 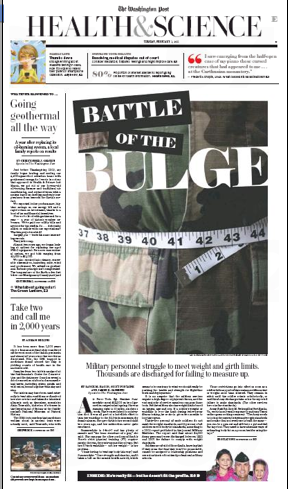 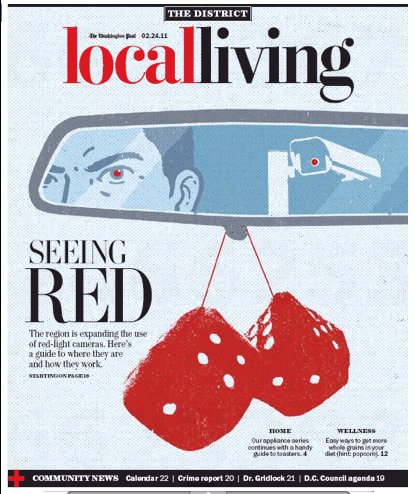 I think this is definitely an appropriate change in pace regarding color of the paper because these sections signal content that is more feature-like. Unlike much of the other news articles throughout the paper, these parts include evergreen articles, entertainment, food, and living articles. All  in all, they’re intended to give the reader a break from the heavy, black and white, dense content. And it not only gives them a break from the daily, hard news, it also gives them a color break. It’s nice on the eyes to have variety, and they way these pages are designed, the WP relies on the color to tell the story in some cases. This helps the reader along even more.

The only thing I might add that criticizes the paper is that in some instances, the color differences might make the paper feel less cohesive. But I say this with caution because I ultimately feel that these decisions were made intentionally to break up the paper, to modernize it, and to still give readers a sense of consistency overtime because these are regularly appearing sections. And they set an expected mood each time they’re released. Thus, it make diverge from the rest of the content throughout the paper, which could maybe make it feel separate occasionally, but it can also be seen as meaning to be separate.

As for use of color in the photography choices of the newspaper, the WP tends to use patterns of red and yellow, at least throughout its front pages. And since over certain chunks of time the front page covers the same story from new angles or with new information, many of the photographs end up looking similar anyway. But this works because it gives readers something to expect each issue.

Overall, the color palette throughout the newspaper maintains the sophistication of the WP. And the inclusion of brighter color scheme within the special sections allow readers to slow down and enjoy the paper more as if it were a magazine. I think it also gives readers something to look forward to because each paper has a different recurring section, and these sections come with interesting compositions and moods.