In Mother Jones’s February issue, the headlines of every story tend to form as hammer heads, which mostly use a big and bold words, and it seems to stand out more with illustrations. Also, each story has a deck under or over its headline so that I could easily recognize what the story mainly talks about. Every story seems to have its theme color, which reflects the topic of the story and the photographs used in, so the headlines and the decks always tend to go along with the color assigned in each story. 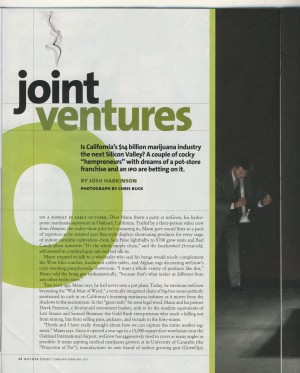 For example, the article above is basically talking about California’s marijuana industry. Its headline is written in green color, which I believe green reflects weeds, and its deck is written in black color, which reflects the main photo placed in the story’s cover page. Its drop cap seems to be too big, which overlaps almost half of the article; I feel that it little disturbs readability. However, I think that these visual aids highly attract the attention of the readers. Regarding the magazine’s tone of voice, the headlines and decks of most articles seem to be very straightforward and easy to read, since Mother Jones is widely known for an investigative journalism. 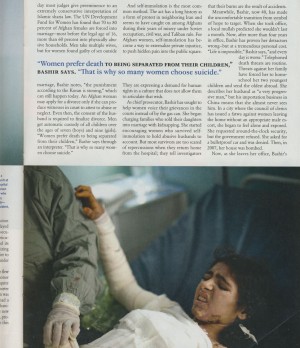 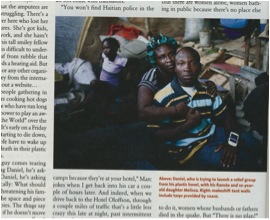 Every photograph and even illustration in Mother Jones has cutlines. In each story, the magazine displays the cutlines in the same color used in its headline and pull quotes. Most cutlines are found under the photographs and illustrations, and they are distinguished by margins displayed. In the entire magazine, only one cutline is placed over the picture, which uses the reverse technique to make it stand out. All in all, different colors, typefaces, margins and sizes of the cutlines help the readers to understand information of the photos and also separate them from the main articles. 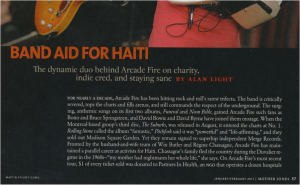 All the bylines found in Mother Jones seem to be simple and ordinary, written in bold capital letters. Also, every byline begins with the word, “By,” always coming after the deck, which helps readers to figure out who wrote the story. I like its simplicity, which reflects the personality of the magazine. 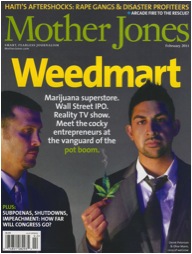 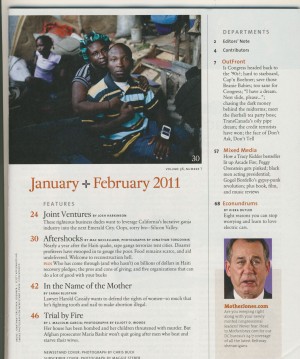 The magazine’s sections seem to be very straightforward and traditional. The sections are displayed in the first page of the magazine, divided into two parts: features and departments. Features take more space than departments, and they are all vertically written on the same page. The sections seem to be well organized with page number. Heads are relatively larger than decks, and the magazine displays only two colors here: red and black. The page numbers make it easier to find the articles that I want to read, and its overall design well reflects the personality of Mother Jones: a news magazine.