Headlines: On the front page, The Washington Post tends to summarize the stories with the headlines and decks. After the front page, you can find a mix of stories that begin with either just a head or a head and dek, but the A1 does a great job of serving readers who only have the time to get the gist of the story. Specifically, this particular example shows three descriptive phrases for the story: Bahrain, Yemen open fire on crowds (the main hed); Obama to Allies: Respect Rights (acts like a secondary head); and Britain, France announce suspension of arms sales. Though I think it’s still hard to understand the title if a reader hasn’t been following the story, it gives enough detail to let the reader know what’s involved. And even throughout the paper when deks aren’t included, it seems this paper strays from punchy, short heds and prefers longer, more newsy ones.  I think this adds to the papers authoritative tone. 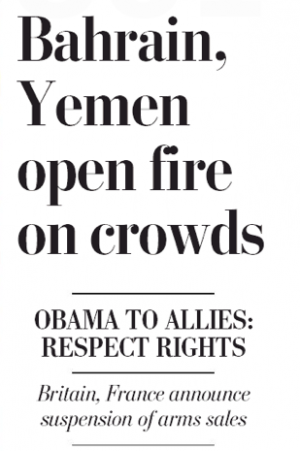 Pull Quotes: The Washington Post uses pull quotes sparingly, but when they are incorporated, they’re always attributed with the name and title of the person. After looking through the paper a bit more, I don’t think the quotes are always the most catchy, although they do add a touch of curiosity toward the story. This particular example of a pull quote doesn’t reflect the point of the story in my opinion (“ She delegates a lot. That’s what executives are supposed to do.”) Because if a reader just scanned the quote they wouldn’t have ever known the “executive” the quote refers to is a dog. With that said, if the story was fully read, I think this quote adds some humor to the article.

Cutlines and Captions: The cutlines used throughout the paper vary quite dramatically. The inside pages typically include succinct cutlines that either just reflect the obvious on goings of the image or they echo the information in the article. Some of the captions are longer, but the information shared doesn’t really add anything new to the story—but they do assist readers looking to scan for the more important information. And occasionally, the paper uses the cutline to direct readers to the website, kind of like refers.

Bylines and Credit Lines: The use of bylines in The Washington Post are pretty typical of most other newspapers, too; the authors of the article are named at the top of the article with the simple word “By” in front of them. Sometimes the articles are co-written, so in this case the byline says “By X and X.” Lastly, related to the byline, the article with a line that lists who else might have contributed to the story and the email addresses of the main writers. I think this is an appropriate approach because it’s inconspicuous enough while still giving credit to the writers. As for the credit lines, the photographers are named below the photos with their organization like this: Jane Doe/Reuters. I think this is a bit less appropriate than the writers approach because it doesn’t specifically say Photo Credit.

Promos and Refers: I really like how The Washington Post uses promos and refers, especially on its front page. The language used in these parts is more conversational and catchy. This is effective because the goal is to get readers to flip through and get past the front page. The quick descriptions of the refers and promos are also presented with active verbs and reads much like a magazine. Here’s an example of he promos put at the bottom of the front page. (Even the look of it resembles a magazine). 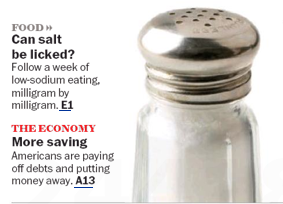 Section and Department Names: The words used to describe different departments and sections are not especially creative; however, they’re effective in the sense that they do not give readers any question about the content that’s included in each part of the paper to cue them about the information . (For example: Politics and The Nation, The World, Economy & Business.) Because I think overall, The Washington Post has positioned itself as an authoritative source, it makes sense to use these types of phrases and words; however, I still think they could tweak the words a little bit to be less generic.