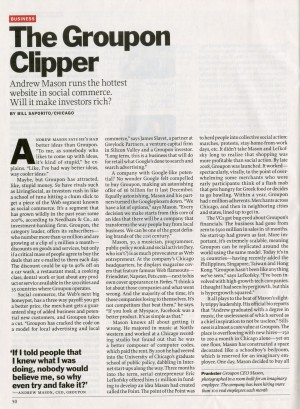 An example of Time's headlines, decks and bylines 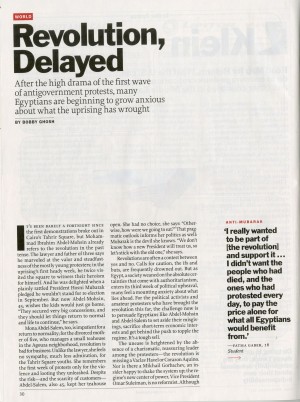 Another example of Time's headlines, decks and bylines

Time’s headlines are typically quite short, usually between two and three words. The magazine likes to use catchy titles that are a play on words of familiar sayings. In the Feb. 7 issue, such examples include “The Escape Artist,” and “Grace Under Fire,” and “Where’s the Beef?” The headlines are therefore straight to the point but not boring. They are pretty typical of magazine headlines rather than newspaper headlines; they draw interest to the article without telling the point of the story.

Time, however, does give a preview of the piece in their decks. Every feature story has one. These decks are about a sentence long (or two short sentences), averaging between 12-18 words. The tone of the decks is the same as the written copy. They are conversational and serious but not haughty or difficult to understand. There is no attitude (as one might find in a magazine such as Wired or Rolling Stone), but instead just a simple response to the question, “What is this story about?” 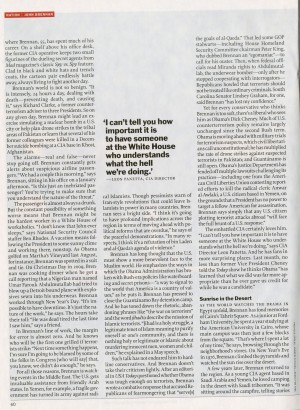 A pull quote with attribution 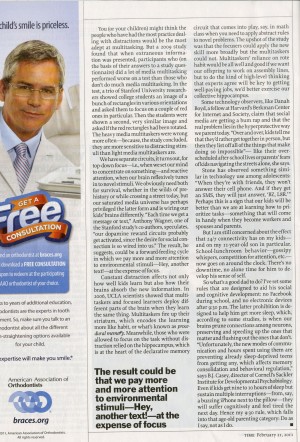 A pull quote without attribution

Pull quotes are used in a majority of the feature articles. Most of the time the pull quotes are simply a fact or interesting line from the story that the author wrote. These have no attribution. Occasionally there will be a quote, which are attributed to the speaker. They again follow the Time aesthetic of simplicity both in tone and appearance. 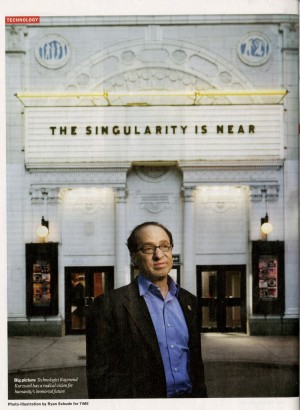 An example of a Time caption

Bylines are the traditional “BY ___________” that works with the Time design. The byline is always in the same place in the same font. They do not get in the way but are easy to find in case one is curious about the author. Credit lines for full page or spread photographs or illustrations are sometimes found at the bottom of the page in bold type (the same typeface that headlines are in but with a smaller font). They are more prominent than the credit lines for smaller photographs or images so the artist/photographer gets more credit. Credits for smaller illustrations or photographs are found in light type in the inside gutter. 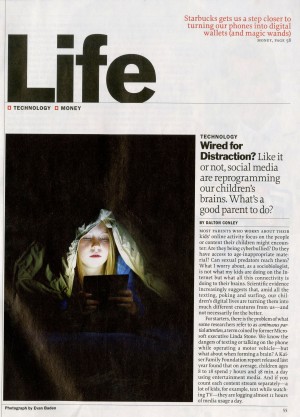 A credit line and a refer

Time rarely uses refers, mostly because magazines rarely use them and Time is a short magazine. On the occasion when they do, the refer is phrased almost like a deck found in a different color type at the top corner of the page. It is simply a 15-ish word explanation of the article and the page on which it can be found. The magazine will occasionally use a refer to point the reader to the website for more information. These are found in the middle of an article and denoted with a dingbat in the form of an eye.

The magazine does not use creative section or department names. They are consistent from issue to issue, however, and appropriately label the section so the reader automatically knows what they are reading. The magazine is organized into four clearly defined sections—Briefing, The Well, Life and Arts. An article that discusses the magazine’s redesign says, “The sections are sign-posted through the use of bold headlines. The front of book section, formerly called Notebook, has been renamed the more active title ‘Briefing’ and is designed to contain an easily ascertained roundup of the previous week’s events, short news items and the popular Milestones and Verbatim sections.”

I like creativity and innovation, but it is sometimes confusing flipping through a magazine or newspaper with unusual sections. It’s like going to an international restaurant and not knowing which is the women’s restroom. Time makes it easy for the reader to navigate the magazine and find the news that is most interesting to them with ease.