Wired is a very interesting publication, stylistically speaking. It jumps out at the viewer from newsstands among the more “toned down” publications. But why? Is it the colors? The amusing cover illustrations? After trying to figure out this answer for a few weeks now, I think I finally understand it, through the use of design, the art department keeps things fresh every month by using formats that aren’t alike throughout the entire publication. Let me show you: 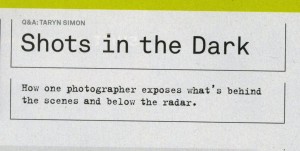 The headlines (the story’s title) used throughout the February issue of Wired have two constants:  are on average about two to four words and the decks (a smaller headline used to summarize the story) are usually about two lines long. This type of headline is refered to as a hammer head, one that uses big, bold words for impact and runs a small deck below it. But there is nothing similar about any of them. Size changes, alignment changes, color changes, and font changes rapidly throughout each page keeping the reader on a design edge. 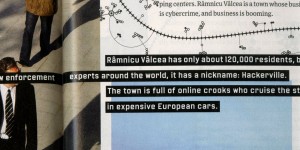 There is not many standard features about the way Wired uses pull quotes, the graphic treatment of of a quotation taken from the story. Some have margins around them, some are placed in their own color boxes. Some lines are attached, some aren’t, while some run over pictures and other are used within the columns of text. Also, some are self explanatory while others aren’t The only similarity, there is never a attribution for the quote or any type of quotation mark. 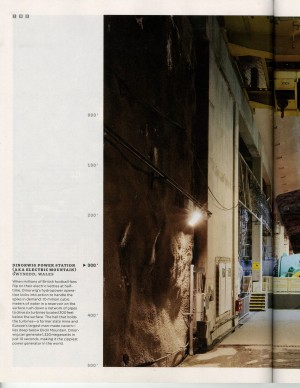 Wired does not have a standard way of showing cutlines, the line of type describing the photo. Wired uses many illustrations which do not have any cutlines or captions. The photo above was only one of four in the publication that had a description of any kind in a block of text next to it. I did not like this because even though illustrations are great, I would have loved to see the story portrayed by photos of what the article was about. 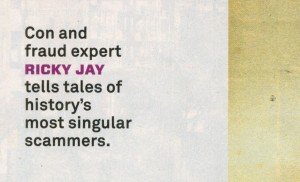 Wired has a very unique way of showing bylines, which is where the report’s name appears for an article.  In some areas of the magazine, which did not depend on section or type of story, it was the usual “By:” or “Text by:” to highlight the author’s name. But in other cases, it was more creative, as the second photo above illustrates. Also, the placement of the bylines were not standard. Some were after the deck in the beginning of the article , others were above the headline,  others were at the bottom of the page, and others were at  the end of the  text.  I didn’t like this, because for the ones listed at the bottom of the article, I think it did not do a great job at highlighting the author. I would be upset if I wrote the story and didn’t see my name until the very end…sometimes people don’t finish an article either and would never see it. 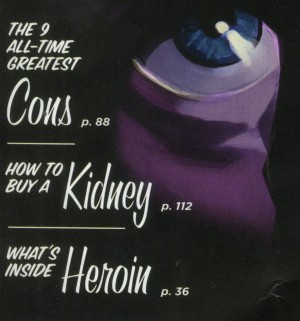 The promos (teasers that promote the best stories inside the magazine) are used on the cover of Wired. Each are short, punchy, and creative to get the reader to open up the magazine.

The sections, or parts of the magazine which separate different groups of ideas, are very sparse in the publication. This part of the front of the book was the only one that listed specific sections. The other areas of the book didn’t have any form of any kind of section. I didn’t like this and felt as if the articles where then just floating in the magazine and didn’t have any organization. I guess this is because the publication changes drastically every month and doesn’t have ongoing categories, but I still think they would be able to come up with something to separate the magazine into recognizable parts.

The jumplines, or line telling the reader what page the story continues on, was one of the few standard pieces of the magazine. There were only two jumped stories to the back of the book, but both looked exactly like the one above.

Wired was not consistent with the folio (a line showing the magazine’s page number, date, and or publication name) either, which as the last thing I looked at didn’t even phase me by now. Some pages had the publication name after the page number, others the issue, and still others had just the page number. And then there were the pages with nothing. I tried figuring this out per odd/even page and section and found nothing in common. I didn’t like this, because I had to almost send out a search party to figure out what page I was.

So, my conclusion is that all of these non-standard items make the publication look appealing to the audience. It looks fresh every month and adds a bit of curiosity. But I just don’t like it and want something more formal .