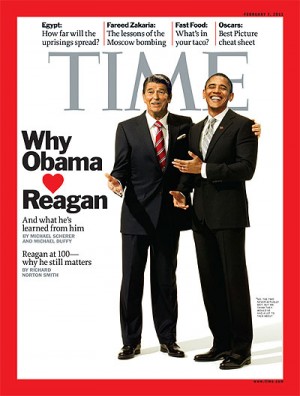 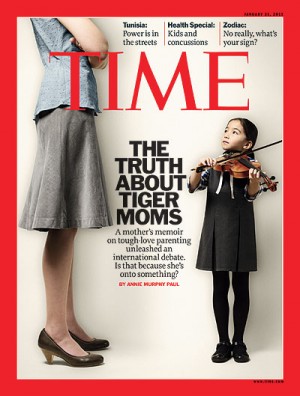 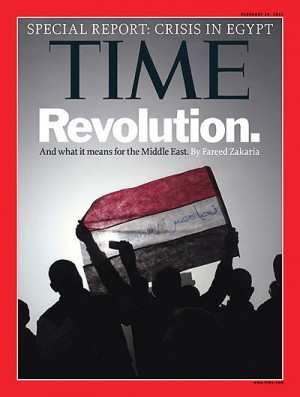 The dimensions for the cover of Time are 8.25 inches by 11.75 inches, making it pretty close to a letter-sized format. There does not seem to be a grid system for the magazine, except for the 25 pixel red border that is found on every issue. The Time nameplate is always centered and at the top of the page, either about 55 or 70 pixels from the top of the page. The location and familiarity of the nameplate brings a sense of trust and reliability to the magazine. No matter if it is blood red or a more subtle light gray, one knows immediately where the nameplate is located and that they are looking at Time magazine.

The lack of a grid allows for great variety for the layout of the magazine. Although each issues features a large image and headline accented in Time red, white and black color scheme, every cover is different. Sometimes the image or photograph is at the bottom of the page with the hed above it; other times the hed and dek split the photograph in the middle of the cover. It is this sort of originality with each week that has made many Time covers famous over the past 90 years.

Since Time is a magazine and has this freedom in layout, it has a non-modular layout. Boxes do not separate material mostly because there is no material to be separated. Time usually only has one story on its cover, with a teaser at the top for another major story inside. It is therefore easy to differentiate between the various aspects on a page. The large image on the cover also indicates what the theme of the issue is, usually before one even gets to read the headline.

This bold image—sometimes even a controversial one, such as the Aug. 2010 cover with the Afghani woman with her nose cut off—is what draws readers to the magazine. The purpose of the cover, as in all A1 or magazine covers, is to get people to pick up the magazine and explore more of what is inside. Time is a weekly news magazine, so the story on the cover is often a large issue that is being discussed at length. An example of this in the past month is the Egypt revolts and shooting in Arizona. Time does a fantastic job of taking an issue that people know about and presenting it in a way that makes a reader buy it off the newsstand. They use unusual proportions, such as with the “Tiger Moms” issue, illustrations and graphic images to attract readers to read about an issue even if it has been in the 24-hour news cycle for a couple of days. They also present a picture that has appeared countless times on the television news and alter it to make it new, as is the case with the Arizona cover.

The information on the covers is organized based on size. The image is the largest and often the most important part of the cover because it draws the most attention. The main headline is second-largest (and the largest font after the nameplate) and is almost always a sans serif font (something that looks a bit like Helvetica). The heavy typeface distinguishes it from the rest of the page. The subtitle is the smallest design element on the main cover, excluding the teasers. This is usually a finer serif font, which some people believe to be Times New Roman. The teasers along the top of the cover follow one of two patterns. They either follow the same title-subtitle design as the main cover or is a single headline in an all-uppercase serif font. Hierarchy is easy to determine because of the size and weight of the different typefaces on the page.

Based on the continuity of design in color and typeface from one issue to the next, Time conveys a simple but serious approach to news. It is reliable and dependable. While the magazine is always sophisticated in its design, the individual emotion each cover raises depends on the subject of the featured article. Red, white and black are all powerful colors, and the magazine’s designers use them to their greatest advantage when laying out the cover. For example, the cover about the Arizona shootings is dark and mysterious, much like the mind of the shooter. The page is mostly black. This is also true with the other grave cover of the four I posted, the Revolution cover. Just the week prior, however, the Obama/Reagan cover is light, happy and playful. The two men are embracing and laughing, and the mostly white page is light as well. The designers even threw in a heart to keep the mood easy. Time’s iconic covers are often the serious ones, but the magazine mixes up the cover’s tone so that it while it is always serious, it is not always so grave.

Overall, the covers of Time are an exact representation of everything that the magazine embodies: a reliable and matter-of-fact source for news analysis and reporting. The consistency of color, typeface and basic structure reflect a dependable news outlet. The design is also simple in nature, from keeping the cover to one large headline to the basic typefaces used. When scanning quickly over the publications at a newsstand, it is easy to recognize Time because they’ve used the same nameplate and red border for years. This consistency in design reflects the respect and dependability that Time has grown to associate with telling the news for a century, and it is one of the reasons it has stayed popular throughout that time.