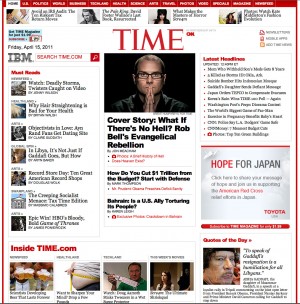 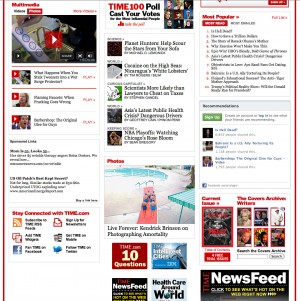 As much as I love Time’s print design, I am not the biggest fan of its website, although it is in many ways a representation of the print publication. The only color that appears is red, and it is used in the same emphasis-highlighter fashion as in print. The typefaces also appear to be the same: Franklin Gothic as the sans serif and a plain, Georgia-looking serif. The website also uses a strong three-column grid system, just as the magazine sticks soundly to a grid. The use of gird, color and type work as well on the web as they do on paper.

What is vastly different from the magazine, and my main source of displeasure with the site, is that the design for the homepage is extremely busy. Luckily, there is only one image on the top-half of the page. It is usually a captivating image, much like the ones that appear on the magazine’s cover and the title pages for the feature stories. It only stands out, however, because it is dark and the only pair of eyes on the page. It is in a column that is the same size as the other two on the page and is not particularly large.

Everything else on the first portion of the page that pops up when the website opens is text. Lots and lots of text. The main stories in the magazine appear under the photograph and contain a bold sans serif headline. They are the only stories to have a sans head (which is naturally more noticeable than the serif) and that use red as links under the headline. The second tier of stories are the ones in the left column, distinguished as such by a larger serif headline and small thumbnail photographs. They are the must-read stories from that issue. Headlines, the third tier, appear in the right column.

The designer of the website loves boxes, apparently, as they are everywhere on the homepage, especially as one scrolls down. Boxes are something that I have found popular on news websites, also appearing on sites such as the New York Times and CNN. They do a good job of sectioning off the different sections. However, because there is so much information on the homepage, the boxes and text become a little overwhelming.

In trying to figure out what exactly I do not like about Time’s website, I started by thinking about why I like the magazine’s design so much. It is clean and surprisingly simple, conveying information in a clear way. The eye always knows where to look and rarely gets bored, even though the design is relatively unassuming. Even busy front of the book pages have clear hierarchy, delineated through text and white space.

What the publication’s website lacks, therefore, is this sense of space, hierarchy and interest. The three-column layout works for further down on the page, and is a grid system often seen with websites, but having this equal spacing at the top of the homepage makes it impossible to have a showcase image and story. It is difficult to know what is the most important. The New York Times does this pretty well because even amidst the craziness of the amount of information of that page, it is clear what is the main story. CNN.com accomplishes this adequately as well. 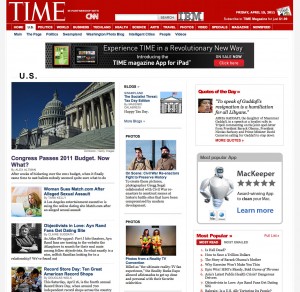 The inside pages are nicer to look at and read. Each page is the same, which creates the same continuity that the magazine has throughout the publication. Under the navigation bar are sub-categories for the page. The main story appears at the top-left under a banner ad, and secondary stories follow with smaller photographs and headlines. These stories are the main focus of the page because they are in a larger column, probably a 1.5 column in the site’s three-column grid. The headlines, bylines and decks are the same for every story on the page. As the stories become less important or older, these components are substituted for a simple headline. The inside pages are simple and easy to read, more consistent with the print publication.