During my graphics class during boot camp last summer, we had to create a layout for a spread for a magazine. We were only allowed to use two typefaces. At first, I thought this was a ridiculous requirement. In an entire magazine filled with different stories with different tones, how could two typefaces possibly express all of these different emotions? I found that if you pick two choices that have a vast amount of options in the font department, you could stretch one typeface a long way.

Time magazine also operates under this thought. Throughout their magazine, from the cover to humorous opinion columns to stories of tragedy in the Middle East, only two typefaces are used. While simple and clean in design, Time never suffers from boring or stale design.

The first of these typefaces, according to an article that discussed Time’s redesign in 2007, is Franklin Gothic. FG had been used throughout the magazine’s history and still appears prominently today. Franklin Gothic is a sans serif typeface. The version they use appears to have some extra weight than the usual face. It is used for any text that needs emphasizing or that needs to stand out. It is Time’s version of bold.

The second typeface is a serif font. I could not find the exact name of this font through research, but after going through the font suitcase it looks to be a hybrid of Palatino, Georgia and Times New Roman. Whatever the exact typeface, the serif is simple, easy to read and thinner than Franklin Gothic. For this reason it is used for all body copy in longer pieces (and many of the blurbs as well). 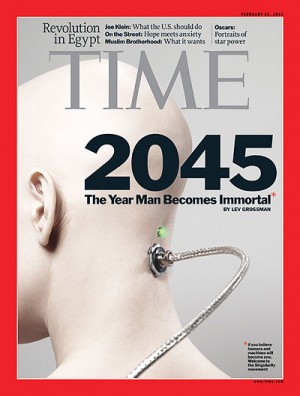 Since Franklin Gothic stands out more than the serif font, it is used throughout the magazine for emphasis. It is the typeface for 99 percent headlines, spanning from the cover to the back of the book. The two typefaces are often used in opposition of each other. This occurs in headlines and decks and also in captions. The sans serif is the title with the explanation in the serif. Franklin grabs attention and the serif provides more information once the eye is caught.

"10 Essential Stories" in the Briefing section. This page uses both typefaces to break up the different stories.

The two typefaces are also pinned against each other to break up large pages of type and to separate individual entries on busy pages. The best example of this occurs in the “Briefing” section of Time. There are many small stories on the same page, as in the “10 Essential Stories” seen above. The tall and skinny (and shorter) entries are in Franklin. It breaks up the monotony of the same Franklin headline, serif body layout. 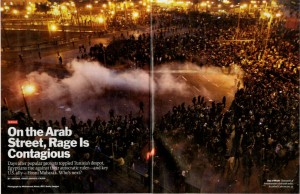 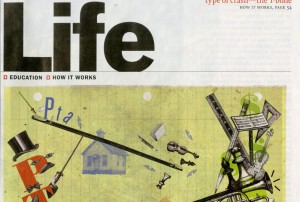 Franklin Gothic, pictured here, and the serif font are used in all sizes, capitalized and sentence case

Since both typefaces are used throughout the magazine, they appear in every size and color (well, just red, black and white). The standard headline is in Franklin with a serif deck. It appears in the same size every time. Occasionally, and more often as of late, Time mixes this up and uses an all-Franklin head and deck, differentiated by size or value of black. 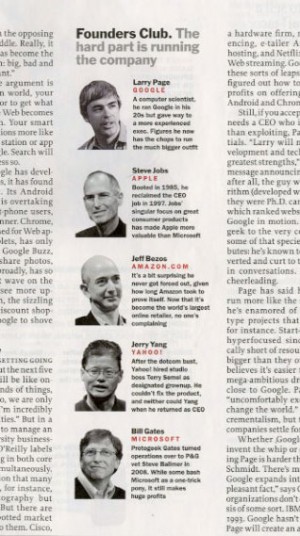 A sidebar in all Franklin type. Red is used to help differentiate a subheadline.

Infographics and sidebars are another place where Time showcases their typefaces. Most of these pieces use Franklin for both the title and text. They use color and font size to tell these two apart, often incorporating the famous Time red for emphasis and separation. By using one simple font, the reader can focus on the details of the graphic and not get distracted by the type. It also creates consistency not only throughout the same issue, but also from week to week.

Although Time only uses two typefaces, and two rather plain ones at that, it works perfectly for the publication. The types are simple and neatly arranged but presented in such a way that it does not become stale. The whole aesthetic and feeling of the magazine, which I have mentioned often in these field notes, is simplicity, trustworthiness and a serious but interesting approach to telling the news. The two typefaces compliment this mission flawlessly. They are basic in appearance so they do not detract from telling the real story¾the news. Instead the typefaces compliment the wonderful photographs, storytelling and graphics that make the magazine successful.

Throughout its history, Time has relied on poignant photographs and illustrations to tell a story just as much as words. From the cover to the inside pages, these images are prominent in every issue. Their simple typefaces are even more important because they do not distract from these images.

Even in the redesign in 2007, the designers wanted to keep the typefaces similar to what the magazine has used throughout their long history. This, combined with the consistency of design, has created a stable environment for its readers. Although the magazine has become modernized and kept up with the times through different designs, the basic look of the magazine has stayed consistent. So too has Time’s devotion to being a reliable news magazine. Its typefaces continue to portray the image it has looked to establish over the years, creating a consistent and trustworthy persona.