Typefaces are designed to stand on their own as useful communication tools. I think that typefaces should be readable for readers, and also it should visually attract them at the same time. Selecting typefaces might be not easy for both magazines and newspapers because it should reflect the personality of the publications. In Mother Jones, only two typefaces—Cambria and Calibri—are used. Also, I’ve found a pattern how Mother Jones displays those two typefaces in its magazine. 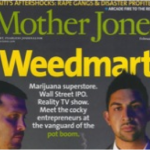 For the overall pattern found in Mother Jones’s articles, all the body texts, including the pull quotes, are written in Cambria, and besides the body text such as the sidebars, the cutlines, and the bylines are written in Calibri. Its size is constant through the magazine, but colors vary from an article to another. The magazine doesn’t use various colors in the body texts. It only uses 2 or 3 colors for each article, and only the cutlines and the pull quotes are displayed in various colors, not black. 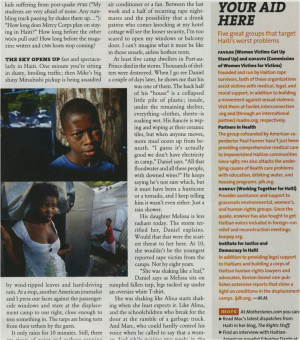 Another interesting thing that I found was Mother Jones rarely uses drop caps in its articles. It might be because Mother Jones is not a fashion/beauty magazine or other magazines that highly require visual contents. The drop caps I found in the magazines are all written in Cambria, since all the body texts are written in Cambria. The sizes are relatively smaller than what I’ve used to see in other magazines.

This constant pattern, a mix of Cambria and Calibri, makes it easier to read the stories and helps the magazine appealing more sophisticated. Cambria is an appropriate choice for Mother Jones as it is a news magazine. I think that Cambria is a more sophisticated typeface than Time New Roman, which has commonly used for most news articles and academic writings. I feel that Cambria is designed to replace Time New Roman. Cambria seems to be strict and formal, which could make readers get bored while reading, but Calibri gives a different perception. It looks totally different from Cambria, more friendly and warm. I think this contrast between the two typefaces work well in Mother Jones. The magazine still appeals as a traditional news magazine, but it seems to be young at the same time. And, the readers might all know the magazine uses the two different typefaces and how they function in the magazine.