Warning: ftp_mkdir() expects parameter 1 to be resource, null given in /home/customer/www/587.claudiastrong.com/public_html/wp-admin/includes/class-wp-filesystem-ftpext.php on line 560
 Typography – The New York Times – PUBLICATION DESIGN

The New York Times is one of the most, if not the most, famous news publications worldwide. It’s the go-to source for news for millions of people, so it’s no wonder that they would stick with a serif as their staple typeface for a majority of their content because of the traditional, more elegant and serious reputation the serif typeface has. You can see in the photo below just how prominent their nameplate is and how synonymous the serif typeface has become with the publication.

Almost like the Boston Globe’s in a sense, but each has put their own touch on it through little characteristics on the font like tails and bridges.

The Times has stuck to a traditional serif gothic typeface with their own slight variation. The typeface that they use was subtly evolved in 2003 to one family, Cheltenham, sticking to Roman and Italic fonts and light and bold weights. For their A1 Headline the publication has followed one font and adhere’s to it for every issue, according to The Times themselves: a narrow variation of the typeface. I think it’s important to note that before the changes in 2003 the newspaper would play around with about 6 different fonts for the headline–something that could have jeopardized the stability of the paper and left the reader feeling a sense of inconsistency. 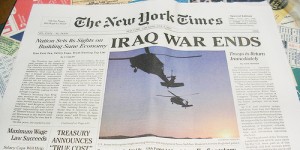 We can see that the sizes the publication uses depends on the importance of the main headline–while the body copy generally stays at the same size (what appears to be probably about a size 10 font.) In some issues the narrower serif is much more prominent, almost taking up the majority of the width of the paper. In the one down below you can see that before the 2003 change, this A1 headline used an italic font. 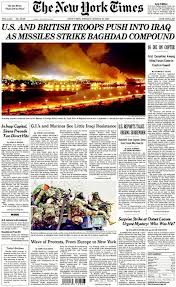 In other more recent A1’s the paper has stuck to just one typeface to maintain consistency, but also to let the reader know that while they changed their typeface a little to give it less of a traditional feel, they are still sticking to what they do best: a captivating serif font that draws the reader in. 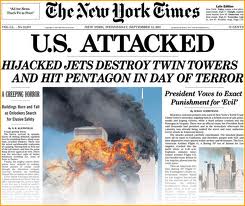 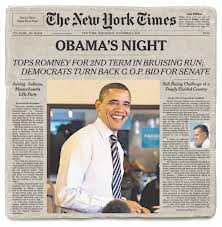 Some of they typographic guidelines that you can see are challenged by the New York Times. In some cases, like above, they put their headline over the span of all six columns they publication format adheres to. In other cases, its sometimes difficult to read what the headline actually is because it gets lost on the paper. 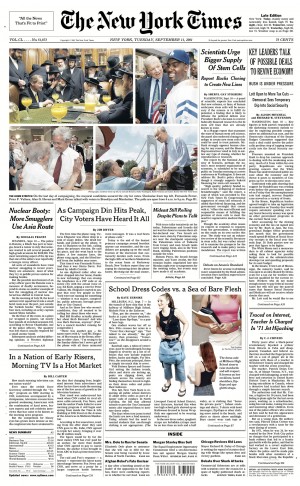 This is one of the biggest critiques I have for the paper, because in the example above, while the pictures are great to look at–if I were passing by I would not want to buy this publication because there is nothing that draws me in. For one there is just too much body copy all over, which is another plus and negative the Times has a reputation for. Secondly, the absence of a headline makes me think “Why should I read this?” 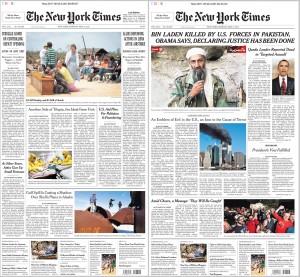 In this example you can see just how much more enticing it is to read the paper on the right, about Bin Laden being killed, because you are actually being TOLD what the news is as opposed to the left where your curiosity has to work even more to determine why that photo is news worthy. However, The New York Times is one of the longest-standing papers because they know exactly how to design their paper, when to use a bold and narrow font (headline), when to use a light and roman one (body copy), or a bold italic (dek or subhead). They have a feeling of credibility and reputation through their now famous typeface that many find it impossible to not associate the publication with. It’s through cover pages like the one down below, which is famous itself, that the Times continues to be an inspirational grandfather in the world of typography. 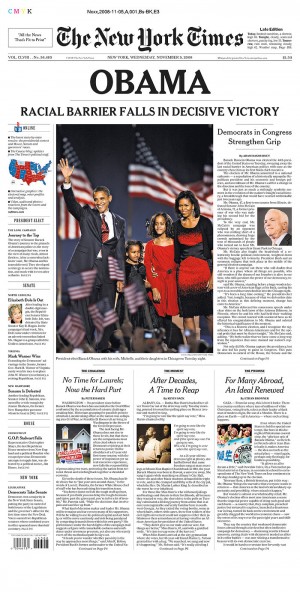