In an article I found on the 2005 redesign of the Guardian, one article reads “Up until yesterday The Guardian used a mix of three typefaces – Helvetica, Garamond and Miller. Today, the paper uses just one – the newly designed Guardian Egyptian.”

The masthead for the paper, divided by color, also has the same typeface as the remainder of the paper, in a different wight.

Here’s another except from an article. 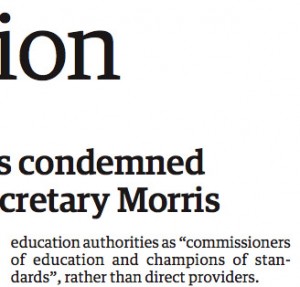 “For Mark Porter, the Guardian’s creative director, a new typeface was needed to anchor the calmer, more modern appearance of the Berliner. It was time to replace the oft-imitated combination of Helvetica Bold headlines and News Miller body text.

Schwartz is American but has worked in Europe; his colleague Paul Barnes is British, but has worked in the States. Porter hoped they could unite the “quirky, sparky, aggressive-looking” elements of continental typefaces with the dignity of American fonts.

Barnes began working on a sans serif font, without the little strokes at the top and bottom of letters. His fascination with typography’s history drew him back to 1815, when the first face with slab (blocky-looking) serifs was invented. The Egyptian typeface became wildly popular and led to a second major innovation, when someone chopped off its serifs to produce the first sans serif font.

“I thought, why not go back and make an Egyptian and cut off the serifs,” explained Barnes. “Then it suddenly dawned on me and Mark: let’s make it an Egyptian. It has the flavour of serif but with a bit more oomph … It’s somewhere in the middle between serif and sans serif.” In other words, it squared the circle as Porter had hoped, uniting tradition and modernity. “It’s clean, without being impersonal”, said Schwartz.

It was also flexible enough to be used for every element of the paper, from front page headlines to personal ads, making the Guardian’s commission the most ambitious the pair had ever encountered. Almost every other British newspaper still bases its design on one serif and one sans serif font.

Instead, Barnes and Schwartz built a “family” with 96 members, ranging from a classic Egyptian to a sans serif italic, and at numerous different weights. Even the £ signs and other special characters were redesigned. Headlines will range in size from 20 to 60 points – there are 72pts to the inch – but will tend to be smaller than at present. After weeks of discussion, the design team settled on an 8pt body font for news pages – as now – with slightly wider vertical spacing, at 9.5pt. It soaks up words, but remains legible.

“Typography requires a huge amount of expertise and careful thought, rather than just drawing twiddly characters,” said Barnes. “It’s the last 10% – which makes it good or really good – which takes the longest time: making sure accents are in the right place or the spacing is correct.” The typographer must determine how much room different letters need; ‘n’ may have 10 units of space on one side, but only five on the other. When they meet, they must be readjusted, or “kerned”.

And yet, after all their months of work, Barnes and Schwartz hope to be taken for granted. “I want people to feel ‘That’s interesting’ on the first day and by the third be reading the news again.” said Barnes. “I want it to be part of their life and for them to feel affection, because that’s what people feel towards the Guardian.”