Charles Apple runs a great blog that touches on everything anyone would want to know about visual journalism. He wrote a post a few years back discussing the creation of design hubs through a company called Gannett. The main idea behind the hubs was for newspapers to export their design work to the them instead of hiring and using their own design team. There was some skepticism when Apple first posted this to his blog about what it would mean for designers, but since then, Gannett has expanded their company and is becoming a lot more popular among newspapers.

The LA Times published an article in October on newspapers moving towards developing their own personal tablets. The idea is still in the works by newspapers such as the Chicago Tribune and the Philadelphia Inquirer. Though the article doesn’t specify how design will be effected, it’s obvious there are going to be a lot of changes to news design if papers decide to go through with these news tablets.

One paper that continuously impresses me with their design is The Colorado Springs Gazette. They have found a way of modernizing tradition design with their typefaces and layout style. I also love how they utilize white space. It’s something that’s easily forgotten in newspapers, especially when there is a lot of content that needs to fit in the paper. The Gazette also is great at adding small details that really set the design apart, like they did in this front page with the border around the photo and the line coming down from the O and separating the two columns.

The Frankfurter Allgemeine is another example of innovative design. What’s so different about them is the text is the bulk of the page. A lot of text is typically overwhelming, but the way the the stories are arranged on the page mixed in with the white space is clean and easy to read despite there being hardly any visual elements. I also like that they don’t run ads or teases above the nameplate. This adds to the crispness of the design. 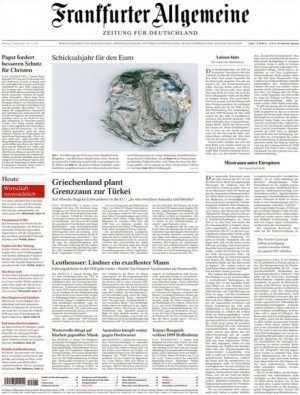