Article 1: “News as games: immoral or the future of interactive journalism?” by Keith Stuart

I came across the article, “News as games: immoral or the future of interactive journalism?” on The Guardian’s game blog website. It’s a fast pace piece discussing why Apple rejected a game app that was designed to explore the conflict in Syria. The article breaks up the “newsgame conflict” into a few sections, including: reaction to Apple decision, influence on news outlets, fading interests and games as a learning tool.

The writer, Keith Stuart, begins the article by discussing how newspapers could utilize apps such as these. For instance, it’s like clicking on a news story about a natural disaster or civil unrest (vaguely), and accompanying the article is an app to play an informative game. The game in question, “Syria: Endgame” was designed by the British group Auroch Digital (in only two weeks). The app is meant to teach readers (players) about the conflict in Syria as they control rebel forces in different “military and political” missions. Apple rejected the game because it “solely targets a specific race, culture, a real government or corporation, or any other real entity,” according to the article.

Stuart goes on to say that there has been mixed reviews on Apple’s rejection of the app. He quotes what one person happily tweeted about the rejection: “How to turn the death and suffering of innocent Syrians into mindless entertainment.” But, others state that creating a game like this could be incredibly beneficial. The writer spoke with Ian Bogost, professor of interactive computing at the Georgia Institute of Technology (who becomes the main source for the story). Bogost feels that creating news games bears no difference to what consumers watch on television or in the movies, and provides the example of Michael Bay’s Pearl Harbor. This article also suggests that perhaps the reason news games haven’t lifted off quite yet in mainstream media is because on the word, game—which has an apparent solely entertainment connotation.

According to this article, it seems that news organizations are falling behind, in that other groups, like museums and charities are using games as a way to engage (he calls this to “gamify”) with a younger audience. He also mentions that gaming has become a “pervasive media” all in itself, and that newspapers are in its grasp.

The article goes on to speak about how quickly interest could fade for news games, due to timeliness of/for the game and the lack of resources, i.e. digital designers, on staff. If timeliness of the game is relevant, it will be more apt to only be briefly important for the site. This means that numerous games will have to be created in order for the site to keep up with potential demand and stories. Stuart states that little funding of the games would hinder the newspaper realm from embracing this idea. “But it’s a shame, because they could be enormously effective in an era where children are now native digital media consumers,” he states. Stuart also spoke to experts in the field that state games are, obviously, an excellent supplement for education and experience. He says that newspapers must start thinking in terms of this interactivity, especially for the digital age.

Here are two additional articles on the subject: AP and The Daily News.

Article 2: “For The New York Time, redesign happens in print, too” by Adrienne LaFrance

Although I don’t usually read the Science Times section in The New York Times, I found the article on Neiman Journalism Lab titled, “For the New York Times, redesign happens in print, too” about a subtle redesign that the section quietly underwent as of Jan. 22, which will be followed, daily, by other section redesigns.

The article starts by stating that the Science Times redesign—as well as the sections to follow—have subtle, barely noticed changes. And, the sections haven’t really been touched since 1970 when Abe Rosenthal designed them. New York Times design director Tom Bodkin stated in the article, “It’s not meant to shake anybody up or be dramatically different.” The currently rolling out designs are intended to have a more web-friendly feel, a new grid that will have a distinguished balance between “continuity and variety.” The variety, mostly, means that the print version of the paper will have increased web-ready packages, and featuring more stories that have more narrative. As Bodkin states, it’s reverse publishing: using web-intended materials for print.

Bodkin also noted that the redesign is intended to allow the print and the web to reflect each other more fluidly, i.e. some typography is now the same. Although Bodkin is in charge of the redesign, he stated that he wants the newspaper to keep its feel, because as long as there are readers and subscribers, there is a desire for the paper. 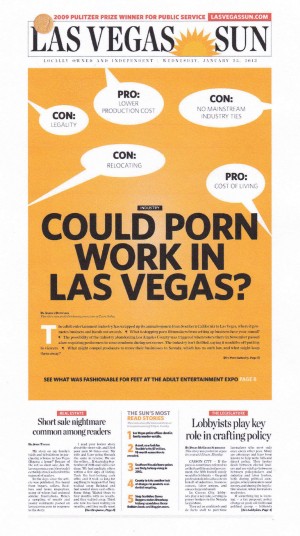 LAS VEGAS SUN: The design concept on the front page of the newspaper is pretty amazing. Aside from the fact the “porn” happens to be in all caps and bold, having no images on the front page (as in pictures) and allowing the words and design to grab the reader’s attention is thrilling. The yellow color is immediately an attention grabber, but combined with the five white thought bubbles, the page begs to be read. I think that it says a lot when a newspaper is willing to give that much space to a headline and (in this case) five blurbs. Aside from importance, it gestures to what the readers in the area might truly be interested in reading. I also assume that, probably, right above the fold, the word “porn” is highlighted. Still, the design seems clean with two neatly aligned stories underneath; it’s a very catchy front page. It vaguely reminds me of an alternative press cover, generally having the cover story completely taking over the front page. Alternative presses usually engage younger audiences, and this type of wording, typography and color makes it seem that a younger crowd would be interested, along with a more bashful, mature reader. 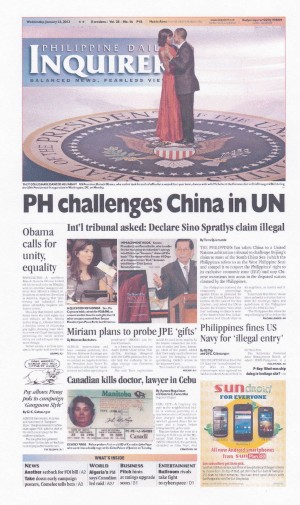 PHILIPPINE DAILY INQUIRER: Although it appears that the front page design seems predictably newspaper, and not so revolutionary, the layout captured my eye. I’m always a big fan of a huge graphic or picture stealing focus right away. I especially like when it’s a picture or graphic that doesn’t have anything to do with the text on the front page. Although the picture leading the page is obviously a well-known subject, it’s a picture that doesn’t need a story. I think that having pictures without text is a great way to attract more eyes to the page, occasionally. I like the idea of letting photojournalism work without text. If pages are going to shrink and text is going to disappear, allowing more images would be a great supplement to—try—make up the absence.