Jacek Utko believes newspapers can be saved by news design.

According to Utko, a Polish newspaper designer and former architect, the design of a newspaper should be an invite to the reader and the front page of the paper should serve as that paper’s signature. Like music, Utko says, newspaper design should provide readers with ups and downs. Designers should not treat a newspaper like a single object or canvas. Instead, the separate sections should be each treated individually. Newspapers he has designed in Poland were award for their covers on three separate occasions, but addition to earning numerous awards, including an award for the world’s best designed newspaper, Utko’s work has also suceeded in increasing readership of those newspapers he dealt with http://www.ted.com/talks/jacek_utko_asks_can_design_save_the_newspaper.html.

Design has the ability to draw people in to the text of a newspaper, and many newspapers do not take full advantage of this fact. In visit Utko’s website and browsing through the examples of his news work, it is clear that that is exactly what his newspapers d. http://utko.com/#./?&_suid=135932922781201604056686058103. While many are not even written in English, it is still clear what each section or story is generally about. 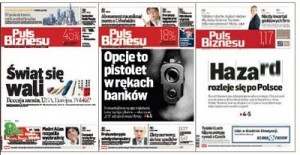 As I watched Utko’s talk, I could not help but think of Canada’s National Post, the newspaper I will be studying over the course of this semester. Like many of Utko’s designs, the Post focuses a lot of its efforts on infographics and illustration. In a time when so many papers depend almost solely on photographs and text, this is what sets the Post apart. As the Post’s Gayle Grin wrote in an essay for the Society of News Design, the paper often uses weekend issues to get creative, sometimes incorporating full-page illustrations on the front cover http://www.snd.org/2012/05/behind-the-design-at-the-national-post/.  In comparing the National Post’s look with that of the papers designed by Utko, the similarities are striking. 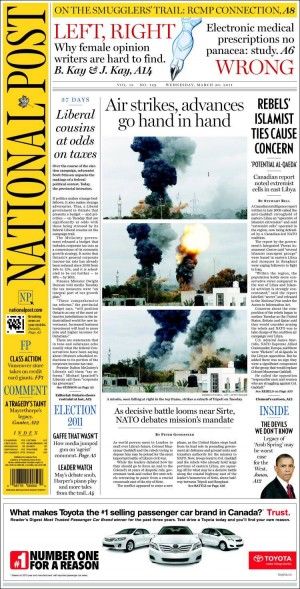 However, there are some who disagree. In an article on the Brass Tacks Design website, Robert Knilands argues for photos over illustration. Pointing to different papers’ stories on Obama’s forclosure relief plan of 2009, Knilands says that much of the effort and time papers wasted in trying to illustrate the perfect graphic to portray the issue could have been saved by simply taking a photo http://www.bestfrontdesign.com/index.html.