The future of news has to be one of my very favorite topics — and it is so intimately woven with design. Innovation in the presentation of information means new interfaces, new styles and new tools, all of which depend on design in their success. Deep Dive is the New York Times’ latest announced project in innovative news. The “content engine” and “story explorer” is an experiment in storytelling, based on a specific reader’s preferences and interests. If implemented, Deep Dive would develop dynamic universe around a single story, putting the New York Times deep archives to work. How will it look? There’s not much to be said yet, but the Times has suggested its interface wouldn’t appear much different than its current design model. The exciting part of it would be the living pages: Users wouldn’t bounce among different URLs but instead would remain on a fixed page during their exploration. (FYI, Nieman Lab is THE fix for news futurists.)

The Little Printer. Yes, it’s really, really out there. A mini printing press designed for delivering personalized news. Its creators, of the design consulting firm BERG, really think this is the device to save news. And while the printer’s goofy smily and unseemly receipt- like product might garner scoffs at first, there’s a lot to be said for the idea. It utilizes curation, personalization and socialization to tweak content. (Check) And trends in technology (think: Moore’s law; everything’s getting smaller — and cheaper) indicate the idea is not totally impractical. (Check) Just look at the phenomenon of 3D printing! Surely we can print our own newspapers. The most exciting part to think about is that if we’re at the helm of the printing machine, and we have some control over its content, who — or what formula — dictates design. For now, the receipt is cute, but what are the possibilities? 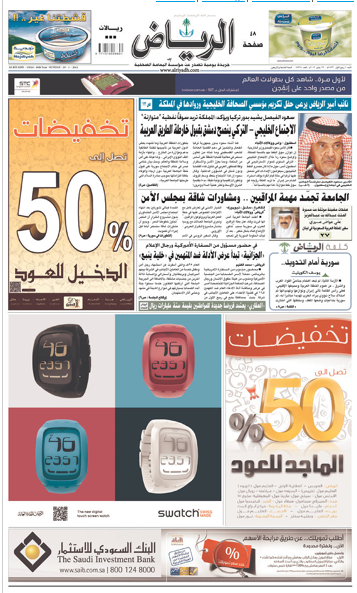 Imagine designing in a whole new world of typeface. That’s what drew me to Al-Riyadh. Unfortunately, this is dominated by ads, but the presentation of the news appears to be different in general, too. There are a number of newspapers in the Middle East, many of them published in English. I have to wonder how the content differs, in addition to the appearance and willingness to shower the cover with ads. 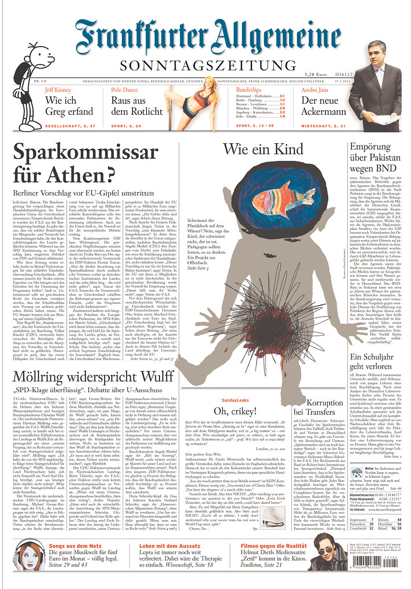 Is that an alien? What exactly is going on with its nether regions? Yeah — I couldn’t help but be drawn to this one. The design of the paper itself is pretty traditional, if anything text-heavy and old-fashioned. But two illos on the cover? I’m intrigued. And maybe a little surprised. Either this paper has a low photo budget, or it’s really trying something odd.