Oliver Reichenstein: “News design is not just how news looks, its how news works”
http://www.globaleditorsnetwork.org/2013/oliver-rechenstein-news-design-is-not-just-how-news-looks-it-is-how-news-works/

Many publications and websites boast of large readership numbers, but how many are truly utilizing the untapped potential of their attentive audience? According to design firm iA CEO and designer Oliver Reichenstein, an increasing number of news brands have forgotten how to engage in what used to be one of the core tenets of any media organization: communication.

“99% of all news sites still follow the authoritarian I-say-you-hear model. No news site that I know of offers a serious researching, reading, writing or archiving functionality,” observes Reichenstein. “Why? Because printed news doesn’t offer that functionality?”

It’s impossible to understate the importance of social media in how we now gather and transmit our news. If I find an article behind a pay wall, or find that I need to provide an e-mail address or other personal information in order to view content, I often skip right past it. Reichenstein explains that if news organizations choose to embrace the rhythms and immediacy of social media, as well as try to streamline their user experience so as not to impede their readers, they will find themselves in a far more successful and prominent position within the media landscape.

He cites the functionality of a website like Reddit, a personal favorite of mine that allows readers to submit content and vote particular items up and down in prominence, as a success in presenting news that is “responsive at its core.”

News design, and more importantly, “responsive design,” can become the engine for this new functionality and engagement. Thinking far beyond mere aesthetic value, Reichenstein stresses that good news design will facilitate reader participation and allow all who engage with a publication or website to navigate news items with ease.

He dismisses the idea of putting news behind a paywall entirely (except in the case of the New York Times, which he rightfully places in “a league of their own”), and proposes the idea of “business class news,” in which a website can offer a version of their website free of ads and other assorted clutter for a fee; he calls it an “aesthetic reward.” Although I am personally somewhat dubious of how effective such a plan would be (I feel that I am accustomed enough to ad-laden websites to persevere through the free version of such a site), it’s an interesting and creative proposition.

—
How have Newsweek’s covers changed since it went digital-only?
http://www.poynter.org/latest-news/mediawire/201831/how-have-newsweeks-covers-changed-since-it-went-digital-only/

This recent article on Poynter.org grabbed my attention immediately. Newsweek’s provocative covers, for better or worse, have always been intriguing to me. The controversy and subsequent discussions they would often set off always provided for a few golden nuggets of analysis here and there, creating an entertaining dialogue at the very least. So, to read someone posit the opinion that there is a possibility that Newsweek seems to be sanding down the edges of that approach in their new digital format is incredibly surprising.

The article itself is short and somewhat flippant, with a “troll rating” being attributed to a selection of Newsweek’s most recent web-only covers. The only cover that seemed intriguing to me right off the bat was their Jan. 11 cover, which featured an animated gif of a diving vehicle, accompanied by the headline “Have We Hit Bottom?” Of all of their most recent covers, this is the only one that seems to utilize its format the best, even if the animation can be interpreted as somewhat gimmicky and unnecessary in context.

After reading over this piece a few times, I found myself pondering a question many other publications will likely have to address sooner than later: how does a publication with a decades-long print tradition adapt to the online medium while still retaining its signature character and voice? Although Wired still exists in print, its subject matter perfectly lends itself to a digital presence, and its iPad edition features a vast number of wonderfully interactive features. Although Newsweek has only existed in its new format for about a month, it would be wise for them to maintain their provocative covers. Their Jan. 25 “Hands Off Our Guns” cover seems to be dipping back into that territory again, but perhaps an attempt in the future to utilize the interactivity that the web facilitates so beautifully will help create something that will help them rabble-rouse even more effectively than before.

HARTFORD COURANT: At first, the paper seems to have a rather conventional layout. However, once you look a little closer, you realise that it does a spectacular job at giving its headlines, articles and photos plents of breathing room within their white space. The black serif and blue sans-serif fonts contrast perfectly, and even allow for a humorously engaging photo to feature prominently, yet not dominate the written content. For so much information being communicated, the page still breathes and doesn’t even come close to buckling under the weight of the information. 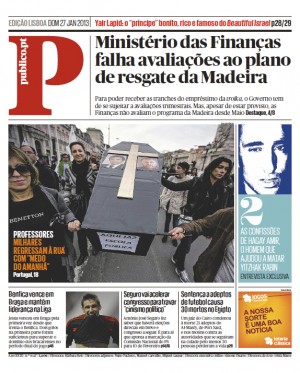 PUBLICO: Big, bold colors and prominent alphanumerics make up the front page composition of this Portuguese newspaper. The page has a very compartmentalized, horizontal composition: even the headline sits to the immediate right of the Publico “P” logo. The immense, striking color photo takes up the majority of the center of the page, with a contrasted portrait and some stylized text sitting beside it. This front page relies heavily on visual elements and a bold, stark and minimalist modern style. Typography and color are front and center, and to great effect.