The first article that came to mind focuses on a trend on the digital side of news design: app-like design for the web.

The Nieman Labs article actually covers a few big ideas from across journalism that the folks of Spark Camp (with whom Nieman Lab collaborated for the post) thought were most relevant. While real-time fact checking and personalized services are definitely interesting trends that have bearing on the future of journalism, it’s Andrew Pergam, Washington Post director of video, who offers the observations most relevant to news design.

User experience seems to be driving the conversation these days. Pergam brings up the examples of USA Today and Quartz as websites that bring the feel of a tablet to the browser. Both are very accessible designs that treat content in a browser much like content within an app. It’s a style of digital design I see as likely to continue because it makes a lot of sense — we view content on a variety of platforms these days, and a unified viewing experience across platforms makes it easier on the reader.

Pergam then points out a different aspect of user experience that is highlighted by HuffPost Live — user engagement. Although it’s a video site, HuffPost Live actually dedicates a larger space to user comments (including video comments) than to its own video content. It’s a design that reflects what HuffPost Live hopes for users to do with it.

Pergam also discusses an actual app, Circa, which breaks down the news into points. It’s a different way of digesting the news, and it’s endorsed again by Monica Guzman later in the same article.

Pergam finishes off by mentioning that the evolution of sponsored content is something to keep an eye on — while it’s becoming better integrated, there’s also the fine line of keeping it distinct from editorial.

The main trend that Pergam sees is design driving new developments. It’s good to see that design is a primary concern among news organizations, and it emphasizes design’s role in journalism. The way news is presented is an important consideration in moving forward, and organizations are starting to realize that.

On the print side, this week we’ll see the debute of a new format for the Columbus Dispatch, the first U.S. paper to take the plunge on “three-around” printing.

Poynter’s Rick Edmunds has been following this story since 2011. At the time, the technology — a way of modifying existing presses to print three sheets per revolution instead of two — had yet to be adopted by any papers. Later that year, the Dispatch and the Cincinnati Enquirer (both Gannett-owned papers) said they would give it a try. The new format hasn’t gone into effect until now because of the huge time and financial investment of retrofitting the presses. Now that the modified presses are ready to go, we’ll finally get to see this new format in effect.

Edmunds explains that the new page size is about 11×14.75 in., about 2/3 the size of the average broadsheet. It can still be easily sectioned and offers color on every page — attractive for both editorial and advertising. The ability to print three pages per revolution speeds up the press run and saves paper, which could have a significant financial impact in a time when the industry is desperate for ways to cut costs.

Even so, the industry has been reluctant to embrace the new technology. The Chicago Tribune passed on it all the way back in 2008 after producing a prototype compact edition. Edmunds speculates that papers are reluctant to try anything quite so radical that involves an investment as large as the retrofitting process. Papers are also feeling out whether a complete shift toward digital is the way to go, in which case an investment in a new print process wouldn’t make sense.

Many eyes will certainly be on the Dispatch in the coming weeks; if the format proves successful enough for other papers to adopt, it could have a significant impact on the economics of print newspapers in the next few years. However, it’s a print-centric strategy in an era where newspapers need to be thinking simultaneously about print and digital, not just one or the other. It’s not enough to find a way to save print without addressing the other economic problem of newspapers, how to turn a profit on the digital end.

This page from the Arizona Republic uses type in a very impacting way. It takes a hard, investigative story on a subject that can be difficult to illustrate, and it creates the right impact without letting the presentation distract from the story. This is an unusual page in that the Arizona Republic doesn’t always have this kind of big investigative piece that would take up so much A1 real estate, but even on regular days the Republic is a strong paper visually, with a very clean look and solid typography. 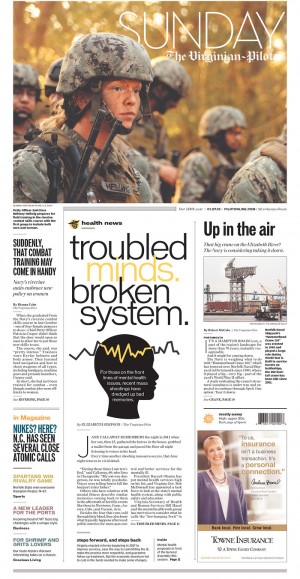 The Virginian-Pilot just about always has something interesting to look at. They know how to play up their visuals, be they photo or illustration, for maximum impact, and they’re not afraid to go bold with their display type. They’re fun to look at as a newspaper because they defy expectations of what newspapers look like. Sometimes it doesn’t always work — for instance, I’ve seen them use circular photos that don’t look very good — but they are always willing to experiment. I’m also not a huge fan of breaking modularity and creating L-shaped story packages, which they do almost every day, but sometimes that’s the price of doing design outside the box.