As we all know, the future of print is slowly becoming extinct. In order to prevent this from happening, I think it is up to our generation to spark new ideas and initiatives. This is a video of newspaper designer Jacek Utko speaking about the future of newspapers and how designers can save them from disappearing!

Wanting to become a magazine designer in the future, I am glad others are also passionate about keeping the print industry alive. In this video, Utko speaks about why newspapers are dying : People do not want to pay for them, New technology such as your computer or iPhone are much easier ways of accessing news, and environmental issues of wasting paper. Utko expresses the importance of type, color and images and creating the entire newspaper together as a whole.

One of the most important aspects he also mentions (which I discussed in my reflection blog) is the important of a designer to be involved within the newspaper from the beginning. Doing this will not only improve the work of the designer, but will improve the newspaper as a whole.

Another article I found describes the future of news design : Web design.

This author stresses the importance of learning web design JUST IN CASE one day in the future, newspapers are no longer around. This article kind of scares me , because although I think it is a good idea for designers to have some knowledge about web design, I do not want to be forced to only having the option for designing for the web. I feel that designers should be well versed in several different medias of design, but should always have the option of designing through both print and online medias. Let’s find new ways to save newspapers and magazines so there wont need to be a plan b!

This front page from The Times – Picayune uses extreme white space to draw attention to it’s readers. Obviously there is white space between each article, or rules to separate each article from another, but creating a larger gap between certain articles can make an article stand out even more. In this front page, the designer easily made the article “A Solemn Season” the most important on the page by leaving a large amount of white space on both the left and right hand sides. Such an easy task of adding more white space around an article has drawn the reader right to the center of the page. 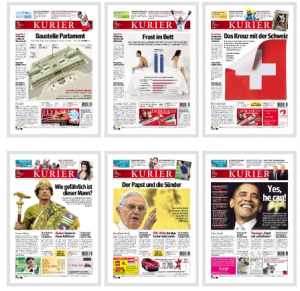 The front pages of the German newspaper Kurier present an interesting and important aspect to design. Each news front has one particular story that is the most important – which shows its importance by containing large headlines and text, and popping images which are sectioned off, along with smaller teaser stories surrounding it. The most important aspect I wanted to point out is that the larger-more important stories are located at the top of each newspaper. Why did they do this? Well i’m not sure this is there reasoning, but If I had to guess, ( and this is something I learned while working at the Daily Orange as a design editor – thanks!) the main stories with their large popping text and colorful images are placed at the top portion because when people receive the newspaper, they will almost always first see the top. When most newspapers are delivered, they are folded over, so the top portion is showing. If the top portion of the newspaper is not eye-catching the viewer might not pick it up – something which is obviously quite detrimental to a newspapers success.