In a world where people consistently refer to newspapers as a dead industry, it’s no surprise that the future of news design lies in websites, tablets and mobile devices. Many loyal newspaper-readers try to counter the transition by emphasizing the beauty of a physical newspaper — the feel of it, the design of it, the overall experience of it. Reading the news should be an experience, and some readers just don’t get the full affect by staring at a bright screen. This, in turn, raises an interesting question: Is hesitancy toward online news a result of cluttered, confusing and near-frustrating design?

Andy Rutledge analyzes the design of The New York Times’ website in the following article, citing it as an example of a suffocating website so packed with links that a reader has no idea where to click or what to read. It seems that NYT’s intention is to cram as much content onto a page as possible. Rutledge believes it could be a plan to overwhelm the reader, tricking them into believing the newspaper is bursting with “a mindbogglingly-bottomless array of important information.” After analyzing the website myself, I find it nearly impossible to recognize any hierarchy among the stories, between what’s most recent and most important and what’s simply a blog post. For example, their main navigation sidebar has about 40 different options for links to subpages.

Working off this example, the future of digital news should incorporate the clarity and breathable nature of newspaper design. Headlines should be bold, descriptive and powerful. Opinion should be distinct from news. Media types like video, gallery and audio, aren’t sections, but should be incorporated into each story.

Here are some examples of more attractive presentations for the digital version of The New York Times that Rutledge created.

For the time being (at least while we still know that newspapers are in fact existent), the same principle must be applied. Readers can’t be overwhelmed by cramming content, sometimes unnecessary, onto a front page simply for the purpose of “filling out the page.” News design needs to give the reader the opportunity to take a breath. In this article, Ohio University professor Julie Elman urges designers to back off.

She brings up an interesting point that I personally often forget when designing. Designers are the ones who are ultimately in charge of putting things on a page, and often times its necessary to go by the principle of less is more. Every dot on a page has a meaning, and if it doesn’t have any meaning, the reader is going to try and assign it one.

Elman suggests designers avoid using photos as space fillers, and instead run a photo very large rather than several photos of the same subject repeatedly. If an image doesn’t add something, she says, then it takes away from the entire package. When I design photo spreads, which are analyzed in this article, I’ll often randomly create a hierarchy among photos based off what works with my design, which photos are the better ones visually, etc. Yet as designers, we must create a story with the photos. We use simplicity and white space to create dominance and focal points, rather than cram as many photos as we can. We use visual cues to guide the reader, such as diagonals to guide their eyes from an entrance to a middle to an exit. The words surrounding photos should complement the emotions of the photos. 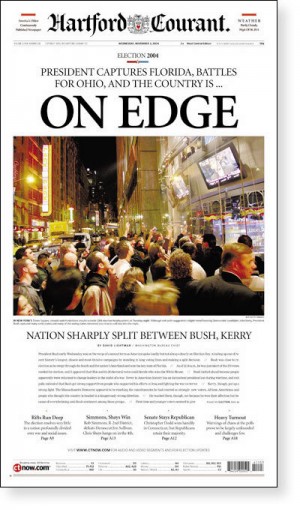 The Hartford Courant’s election coverage of 2004 is most likely among my favorite post-election front pages. It’s elegant and chilling at the same time — the bold mac and white space put the reader on edge, and then simultaneously bring the reader into the photograph, in which everyone is equally on edge. The white space of the design and the break from the Courant’s normal something shows you something’s wrong or out of the ordinary instantly — the design echoes the sharpness and discomfort of a sharply split nation. The all-caps, centered text additionally create an eerie tone, while keeping its boldness. Simplicity works. 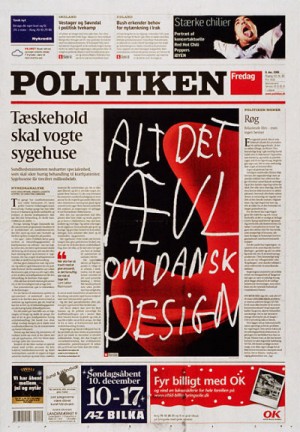 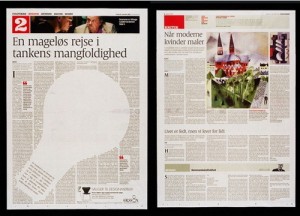 This front page takes soft and neutral colors and a clean layout so that the front page art pops out in contrast, looking especially sharp. Clean, horizontal packaging on the right hand side of the A1 compliments it well. The jump pages are also stunning, with sharp typography and the use of white space allows the light bulb to pop and work as art in itself. The red pull quotes work as simple but fun accents. Poltiken takes white space and a lack of photography and transforms it into something artful, which is truly innovative.