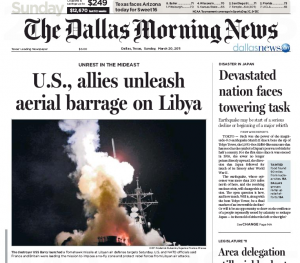 So here was today’s front page from the DMN. The photo they used was pretty much the photo everyone used for the Libya attack story, but issue here is that this is the Sunday of the paper and besides this photo there just isn’t much going on. The story is pretty epic and for them to play it so…safe and boring really surprised me. Flipping through the paper, I realized that the DMN usually picks pretty good photos, but just plays them so wrong that it makes it hard to be engaged by them. 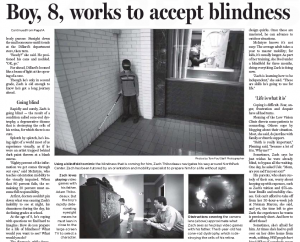 This was an entire page package about a boy who is slowly going blind. I think the lead picture is okay, but I think the one with him leaning into the TV with his dad is a lot more engaging. I also wish the third picture was bigger, because really, who cares about a one column black and white picture? It’s not even worth running at that size. And this might be irrelevant, but can we talk about that headline? Probably one of the weakest I’ve read in a while. I did read the story, and it was also pretty weak, I mean considering such a great topic, but still, that headline could be jazzed up. 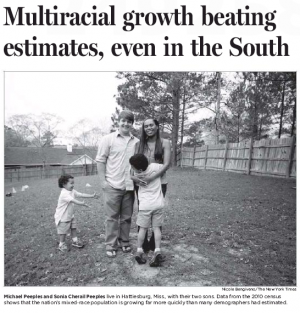 The one thing I noticed what the DMN does well is use these nice portrait shots a lot. I saw a couple in the issue today, and I thought this one was particularly nice. If the DMN isn’t afraid of one thing, it’s a couple of nice people or a family looking into the camera. 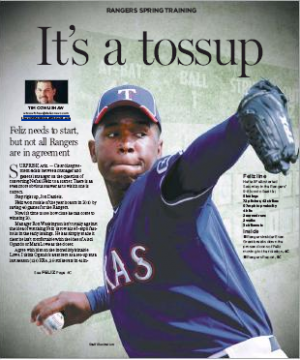 My favorite stuff continues to come out of the Sports department though, as seen by this lovely treatment. The main photo layered on top of the back image is great, and the placement of the content around it seems very natural and unobtrusive.

Overall, I think the DMN doesn’t do a good job playing their photos because of their overall design aesthetic. The large gutters don’t leave for a lot of flexibility with photos, and their kind of staunch and stubborn traditional ways have them stuck. I’m not impressed.